Home Headline Biden’s Priority is Appeasing Iran, NOT Helping Ukraine
Share on Facebook
Tweet on Twitter
Photo Credit: Jlhervàs; State Department / via Flickr
If you listen to Biden administration spokespeople and the talking heads that form their mainstream media cheering section, you may think you know what is its foreign-policy priority: to do anything short of war to aid Ukraine in its brave fight against Russia.

But as news broke this week about the administration’s success in reviving the disastrous 2015 Iran nuclear deal, that assumption is being called into question. If, as appears to be the case, the United States is giving Russia “written guarantees” that nothing in the new, even weaker accord with Tehran will interfere with Russia’s activities in Iran, then it’s clear that not only is Washington signing off on Moscow’s ability to evade sanctions, but clearly signaling that nothing—not even an act of aggression that created a humanitarian disaster—is more important to President Joe Biden and his team then their quest to appease the Islamist regime.

To his credit—and despite an emotional appeal to Congress this week by Ukrainian President Volodymyr Zelensky—Biden is resisting his pleas for NATO to create a no-fly zone over his country. Nevertheless, he is otherwise acting as if facilitating both military and humanitarian aid to the Ukrainians is the main focus of American policy.


Just as important are his efforts to isolate Russia. The sanctions put on Moscow and those directly connected to President Vladimir Putin are having a devastating impact on the Russian economy. With all commerce, including the sale of oil and natural gas, from the Russian Federation grinding to a halt, it looks as if the United States is serious about bringing the country to its knees unless it concedes defeat in Ukraine and/or gets rid of its authoritarian leader.

For the first time in several years, Americans seem united on an issue. Both the right and the left are alike in their contempt for Putin’s thuggish behavior and their compassion for his Ukrainian victims. This rare consensus is rooted in what The New York Times aptly described as their conviction that their country should still be “a steadfast global defender of freedom and democracy.”

That most Americans care about an injustice happening in a far-off country many of them couldn’t even find on a map is encouraging news. Failed wars in Iraq and Afghanistan seemed to have bred a new kind of isolationism that has made the country wary of foreign entanglements and drained it of any idealism about the need to stand with free peoples against oppression.

One shouldn’t count on this new spirit of global engagement to last, and it doesn’t extend to any specificity about what exactly most Americans want the president to do to halt the suffering in Ukraine. Still, it does give Biden considerable freedom of action. If nothing else, it also functions as something of a pass from even those most upset about rising gas prices. Although the record levels of inflation predated the war in Ukraine, the cutoff of Russian oil is regarded with some equanimity by many voters who think it a worthwhile price to pay for not continuing with business as usual while Ukrainians are being chased from their homes and slaughtered.

Despite having what amounts to as close to a blank check as any political leader in this deeply divided nation could hope for, Biden is not taking advantage of it. That’s due in part to his own lack of decisiveness with respect to action on Russia and Ukraine. It was Biden’s weakness—amply demonstrated by his disgraceful withdrawal from Afghanistan—that gave Putin the idea that it was time to follow up on the attacks on Ukraine that he launched in 2014 on former President Barack Obama’s watch. And even after the invasion began, Biden had to be dragged by public opinion into putting the kind of tough sanctions on Russia that might make an impression on Putin.

Yet even now that he appears to be all-in on an effort to punish Putin by a wave of emotion that may or may not be driven as much by a serious understanding of American national security interests, that impression is misleading.

That’s because key members of his administration are singing a very different tune as they work towards a new Iran deal.

Given the administration’s willingness to accept a renewed deal with the same sunset clauses that will guarantee that Iran gets a bomb, rather than indefinitely forestalling that possibility, it seemed inevitable that sooner or later Iran would agree to rejoin the pact. That was made even more certain once the United States began sweetening its offer further to include concessions aimed at easing pressure on Iran for its ongoing activities as the world’s leading state sponsor of terrorism. That involved, among other things, an astonishing offer to remove the Islamic Revolutionary Guard Corps—which is, among other things, the regime’s coordinator of terrorist activity—from the U.S. list of proscribed foreign terrorist organizations.

Despite this surrender to Iran, the deal was put on hold recently by the demands of Russia. Moscow is one of the P5+1 group that is responsible for the nuclear deal, and their assistance was required to get Iran back to the negotiating table—something that was made possible by the fact that Tehran has acted as a Putin ally in the Syrian civil war. But the Russians put a hold on the negotiations when they demanded that the new agreement superseded any of the sanctions that the West has imposed on the Putin government.

If completely isolating Russia from the global economy was Biden’s objective, then that should have been the end of the talks. The point of the nuclear deal is to bring Iran back into the community of nations and get its oil back on the international commodities market. Declaring that the sanctions don’t apply to Iranian interactions with Russia would, along with Putin’s alliance with China, allow him an escape hatch that could make the difference in helping his regime survive, irrespective of the outcome of the fighting in Ukraine.

But Biden and his foreign-policy team, who are led by people who are the veteran Iran appeasers who crafted the original nuclear deal, were not deterred by that prospect. So the news that Russian Foreign Minister Sergey Lavrov has pocketed “written guarantees” from Biden’s Iran envoy Rob Malley makes it obvious that nothing, not even something that might sabotage their efforts to help Ukraine, will stop them from completing their mission to appease Iran.

Moreover, the means of this appeasement should be familiar to those who remember how the original deal was secured. Both then and now, the Iranians were able to extort exorbitant ransoms for freeing Western prisoners that had been taken hostage on bogus charges. The freeing of a British national and the prospect that American hostages will soon be released at the cost of billions of dollars is an appalling prospect for those who understand the way Iran has once again gotten away with criminal behavior.

The craven nature of Biden’s approach was further illustrated by the administration’s lack of a military response to an Iranian missile strike on an American diplomatic compound in Iraq. That some in the administration sought to claim the Iranians’ real target were Israelis rather than Americans makes the disgraceful nature of their posture towards Tehran’s terrorism even more apparent.

When this new Iran deal is rolled out, we can expect that the administration will falsely claim that it solves the nuclear problem while downplaying the way it enriches and empowers the ayatollahs, and gives them a get-out-of-jail-free card for terrorism.

But it also amply demonstrates that the idea that Biden is focused on helping Ukraine is a brazen lie. He’s not just selling out Israel and its Arab allies that are directly threatened by the prospect of an Iranian nuke as well all kinds of other malign activities. It also shows that he will betray Zelensky and the Ukrainians so long as it enables his Iran appeasement to continue. 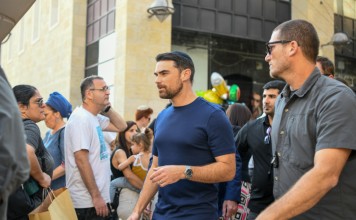