If Charles Krauthammer were to write a column about himself it would be his most inspiring. Since 1985 Krauthammer has been writing a syndicated column for The Washington Post carried by more than 400 newspapers worldwide and for which he won the Pulitzer Prize for distinguished commentary.

Krauthammer’s influential writings have helped shape American foreign policy. The Financial Times named Krauthammer “the most influential commentator in America” and he won the National Magazine Award for Essays and Criticism – the highest award in magazine journalism – for his articles in The New Republic. He’s also a contributing editor to The Weekly Standard and to Fox News, where he appears nightly on “Special Report With Bret Baier.”


A physician by training, Krauthammer was born in New York City in 1950 and raised in Montreal. He attended McGill University, Oxford University, and received his M.D. from Harvard. He helped direct planning in psychiatric research for the Carter administration, served as speechwriter to Vice President Walter Mondale and served on the President’s Council on Bioethics. Krauthammer’s latest book, Things That Matter: Three Decades of Passions, Pastimes and Politics (Crown Forum) has sold over one million copies and was a Number 1 New York Times bestseller.

The Jewish Press met with Krauthammer in his Washington, D.C., office for a conversation on foreign and domestic affairs during which his decisive intelligence was matched by his warmth and graciousness.

The Jewish Press: As turmoil rages in the Middle East, a fragile cease-fire between Israel and Hamas is underway. What do you think Israel’s ultimate endgame should be?

Krauthammer:The important thing about the endgame is to make sure that Hamas reaps nothing. Ultimately Hamas is an obstacle to peace. There are two ways to get rid of it. One is militarily with a very expensive (in blood) occupation, which is what some hardliners in the Israeli cabinet want to do. The other way is to see it fall, from lack of support. I don’t see Hamas maintaining its popularity.

The objectives should be to make sure Hamas loses ground within the Palestinian polity and get to the point where it is going to run out of rockets and patience from the Palestinians. It’s a modest aim but considering that the tunnels have been destroyed, the rockets have been degraded, if you prevent rearmament and make sure there’s no relaxation of the blockade for weaponry then you’ve won. I hope Israel won’t blow it. Israel has undone a lot of victories at the negotiating table, Oslo being the greatest example.

In the wake of Hamas’s PR victory in the Gaza war, do you see anti-Israel sentiment in Europe and America translating into sanctions against Israel and other tangible dangers?

Yes, I do. But you have to draw a distinction between Europe and America. In Europe you’re dealing with raw, ancient, two thousand-year-old anti-Semitism disguised as anti-Zionism and that’s never going to change. They had a fifty-year hiatus after the Holocaust out of shame. That only lasted two generations. What does it say in Exodus? “And a new Pharaoh arose who knew not Joseph.” So these people didn’t know Joseph. And they don’t care. This is the old style.

You’re not going to change public opinion. The media are so biased you can’t get your story through. But what counts is America. The Europeans have the ability to hurt Israel economically, but Israel can’t stop defending itself because the Europeans don’t like it. America is the key battleground, and here I think Israel is holding its own.

A Pew survey conducted at the height of the Gaza war showed that twice as many Americans believed Hamas was responsible for the violence but it also pointed to higher support for Hamas among younger Americans and minorities. How concerned are you that anti-Semitism might become a real threat here in America? 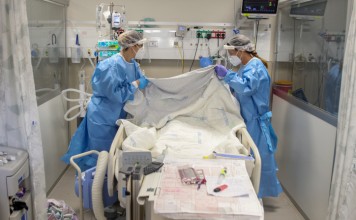