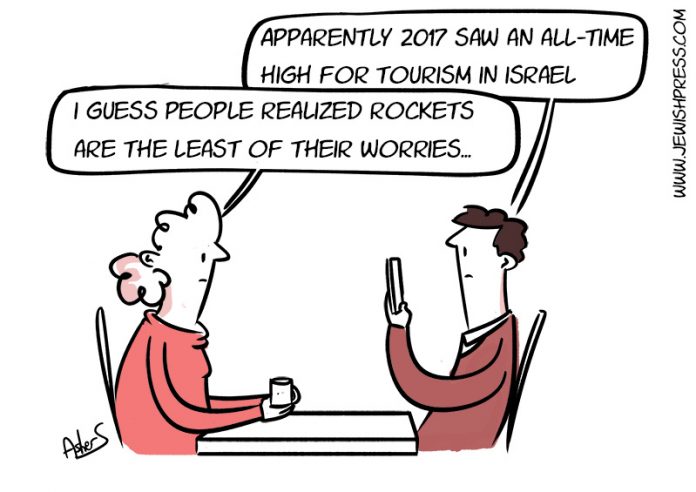 The Boycott, Divestment and Sanctions movement (BDS) is designed to delegitimize the State of Israel. Its object is to target the country’s very identity and legacy. A people’s future cannot be stolen unless its history has been erased. With that in mind, the BDS movement seeks to undermine not only Israeli tourism in general but its greatest and most meaningful attraction – its multi-faith religious roots.

It is true that Israel features excitement and awesome beauty in its museums and architectonic urban spaces, stem-to-stern coastline, deserts, caves, hill treks, river trips, zip lines, and jeep excursions, not to mention its nightlife. But many nations offer outstanding museums, mountains, wilderness, and cities. Israel possesses one tourist attraction that no other nation can offer, and that is craved by people around the world: its unrivaled religious heritage. That heritage is inextricably woven into the country’s national identity.


All three major Abrahamic religions are anchored in Israel.

Christians constitute the majority of tourists visiting Israel, many on religious quests. Generally speaking, Christian pilgrims are completely detached from Palestinian and Israeli political dynamics. Christian tourists can be seen in Israel every day of the year. On April 27, 2019, Holy Saturday before Orthodox Easter Sunday, some 10,000 Christian pilgrims from across the world tried to squeeze into the Church of the Holy Sepulchre in Jerusalem’s Old City for the 1,200-year old “Holy Fire” rite.

On Ramadan, Muslims crowd into Jerusalem. In 2019, on the first Friday of Ramadan, 180,000 peacefully attended prayers – a 50% increase over 2018. In 2018, on the last day of Ramadan, some 200,000 Muslims gathered at the Al Aqsa Mosque for their prayers. The faithful generally include hundreds from Arab and Islamic countries lacking diplomatic relations with Israel. For example, until a recent bilateral spat, Indonesians were regularly issued visas to tour Jerusalem.

During Passover 2019, some 750,000 Jews visited the Kotel, or Western Wall, many wedging a tiny note to God in the spaces between the massive stones.

In the face of these intense spiritual connections to Israel, BDS has tried to boycott the Dead Sea Scrolls, Ireland has tried to criminalize the purchase of relics and religious mementos from the Via Dolorosa, and there has even emerged an almost-comical but persistent misinformation campaign, corollary to BDS, that asserts that the Second Temple never existed as a Jewish edifice.

Amidst all the veneration of Israel as the Holy Land and against the international BDS campaign, two Jerusalem tunnels have emerged as among Israel’s greatest attractions, luring tourists from many countries. Testifying from below ground, these tunnels manifest Israel’s incontrovertible connection to the land and its history.

Most prominent are the Western Wall or Kotel tunnels. Only an approximately 200-foot section of the Kotel is above ground. The rest – nearly 1,600 feet – lies underground and can only be experienced via the tunnel complex. This monolithic testament to Judaism’s ancient connection to Biblical Jerusalem is revealed in the enormity of the massive stones and their tell-tale chisel marks. One such stone weighs more than 500 tons – one of the heaviest ever handled.

So many tourists are visiting, the official tunnel website now posts in Chinese, English, Spanish, French, Russian, and Portuguese as well as Hebrew. The most foreign-language visitors to the site are Spanish, French, and Russian speakers. In 2017, about 320,000 visitors from around the globe toured the tunnels according to tunnel administration, which adds that the 2018 number approximated 400,000. The 2019 tally is expected to hit another new record.

All these visitors come against a backdrop of agitation against official or diplomatic visits to the Wall, especially after the controversial 2016 UN Security Council Resolution 2334, which declared the Wall occupied territory. President Donald Trump’s administration broke that taboo. On May 14, 2019, attorney Alan Dershowitz invited all to join him in committing “a war crime” by visiting the Wall and slipping a note in the crevices.

The second major underground attraction is Hezekiah’s Tunnel, a below-ground water conduit approximately 600 yards in length (1,200 cubits). This length corresponds to the tunnel’s stone inscription discovered in 1880 and now residing in a Turkish museum. The amazing engineering feat was presumably the work of King Hezekiah ahead of a siege by Assyrian King Sennacherib at the end of the eighth century BCE, described and alluded to in several Biblical passages. Among them is 2 Chronicles 32:2-4, which states, “When Hezekiah saw that Sennacherib had come and that he intended to wage war against Jerusalem, he consulted with his officials and military staff about blocking off the water from the springs outside the city, and they helped him. They gathered a large group of people who blocked all the springs and the stream that flowed through the land. ‘Why should the kings of Assyria come and find plenty of water?’ they said.”

Tunnel diggers are said to have started at opposite ends, advanced toward each other, and, astonishingly, met in the middle to form a perfect conduit and gradient.

For years, Biblical archaeologists have argued about the exact dating of the tunnel and whether it was accomplished under the reign of Hezekiah or another king. But for travelers, the main attraction is the ankle-deep wet walk through the tunnel – and its riveting nexus to ancient Israel.

Despite its dramatic connection to ancient Israel, a vigorous taboo has been promoted by international critics who claim the subterranean water conduit is located beneath the Arab neighborhood of Wadi Hilweh. Nonetheless, in 2017, more than 557,100 visitors sloshed through the underground passage. In 2018, the total jumped to more than 833,000. With 207,280 tunnel visitors in the first quarter of 2019, the year-end tally may reach near a million. City of David officials say most visitors are American, but the number of Chinese tourists is rising dramatically.

It is a measure of Israel’s turbulence that even the most dramatic archeological manifestation of the Jewish connection to its ancient homeland has become a contentious flashpoint. But as in all other aspects of its international travel appeal, Israel’s Biblical tunnels are now permanently dug into the Jewish State’s tourism triumph.