During the coronavirus crisis, Israel has devoted great resources to helping the Palestinian Authority and the people of Gaza fight the pandemic. Nevertheless, the increased need for Israeli humanitarian assistance has not led to a decline in Palestinian Arab obstinacy, terrorism and incitement to violence. Recently, P.A. leader Mahmoud Abbas ended all security coordination with the State of Israel, despite the threat that the pandemic and Hamas pose to his society.

Furthermore, Palestinian Media Watch reported that the P.A. daily Al-Hayat al-Jadida recently published an op-ed proclaiming, “Palestine is from the [Jordan] River to the [Mediterranean] Sea. It is the Palestinian people’s historical homeland, and the status of Acre [i.e., an Israeli city] is the status of Nablus [biblical Shechem], and the status of Jaffa [i.e., an Israeli city] is the status of Hebron.” In other words, the P.A. does not recognize Israel’s right to exist within any borders. As the Fatah Constitution states in Article 12, the goal of the Fatah movement “is the complete liberation of Palestine and the eradication of Zionist economic, political, military and cultural existence.”

Pandemic or no pandemic, neither the Palestinian Authority nor Hamas is reconsidering their political ideology, which is inherently hateful towards the State of Israel. Their desire to destroy Israel is uncompromising and no humanitarian need will change it. As prominent Middle East scholar Dr. Mordechai Kedar stated in an interview, “The whole raison d’etre of the P.A. entity is negating the right of Israel to exist as the nation state of the Jewish people. Their philosophy is based on not how to live side by side with Israel, but how to establish another Arab state on the ruins of Israel. They never gave up on their aspirations to return millions of people into Israel.”

“They speak about establishing a state in Judea/Samaria and Gaza, but they never show the borders,” he added. “In every illustration of their land, Palestine includes Israel entirely. They have never started to teach or to educate their young generation about peace with Israel. On the contrary, they keep teaching false narratives, as it is stated in their school books that Haifa, Acre, Nazareth are all part of Palestine.”

As bad as Fatah is, Hamas ideology is even worse.

This violent ideology promoted by both Hamas and Fatah has a humanitarian cost for the Jewish state. The Meir Amit Intelligence and Information Center recently reported a rise in the number of terror attacks originating in Judea and Samaria.

These incidents all occurred despite Israeli aid, both to Gaza and the Palestinian Authority. According to COGAT, otherwise known as the Coordination of Government Activities in the Territories, 250 coronavirus test kits have been transferred from Israel to the P.A. COGAT also announced that “joint training sessions for Israeli and Palestinian medical personnel were organized for the professional study of the virus, the protection of medical personnel, and the testing of patients suspected of being virus carriers.”

This Israeli assistance to the Palestinian Authority and Gaza is of critical importance at a time when the Gaza Strip has reported its first coronavirus related death. Although the Gaza Strip has only reported 55 coronavirus cases to date, according to Israel Hayom the coastal strip has only 60 ventilators and a chronic shortage of medication. Therefore, a massive outbreak of coronavirus there would be disastrous. For that reason, the Israeli assistance is of critical importance and so far, this assistance has helped to prevent a massive humanitarian disaster.

Civil Administration Health Coordinator Dalia Basa proclaimed: “Bacteria and viruses do not stop at the border, and the spread of the dangerous virus in Judea and Samaria can also jeopardize the health of the residents of Israel. COGAT and the Ministry of Health will continue working to help the Palestinian authorities curb the spread of the virus in the territories, both as an Israeli interest and for humanitarian reasons. We will expand medical training to Palestinian personnel as much as possible, as well as the transfer of medical equipment to the Palestinian healthcare system.”

Nevertheless, neither Fatah nor Hamas appear to be grateful for the life-saving assistance that they received from the Jewish state. However, not everyone in the Palestinian Authority and Gaza supports what the terror groups are doing. This past “nakba” (“catastrophe,” referring to the creation of the State of Israel) day, due to the coronavirus, not too many people attended anti-Israel rallies and events commemorating the nakba, which were mainly held online with poor attendance.

According to an Arab source who wishes to remain anonymous, most “Palestinian” people these days are “indifferent towards the P.A., its institutions” and the terror groups due to their corruption:

“The Palestinians are beginning to question, where is all of the billions of dollars of aid supposedly received by the P.A. in the past decades since its establishment? This state of emergency that they are living showed them and proved to them that all the donors’ money, 90 percent of it, never reached where it should be.”

“People are more realistic today,” he declared, stressing that the coronavirus aid can be the beginning of a new relationship with the “Palestinian people,” not the corrupt leadership who refuses to relinquish their hateful ideology.

“The Palestinian people can be told lies over and over again, but it does not mean that they believe everything that is aired or published. Eastern Jerusalemites would prefer to be reigned over by the Israeli civil administration, rather than by a bunch of corrupt officials of their own blood. Israel was there wherever it could be, whether in Gaza or the West Bank. The fact is that Israel allowed medical equipment into Gaza and medical supplies from various sources and from Israel itself into the cities of the West Bank and into Gaza in an expeditious manner, which helped to save the lives of people,” said the source. 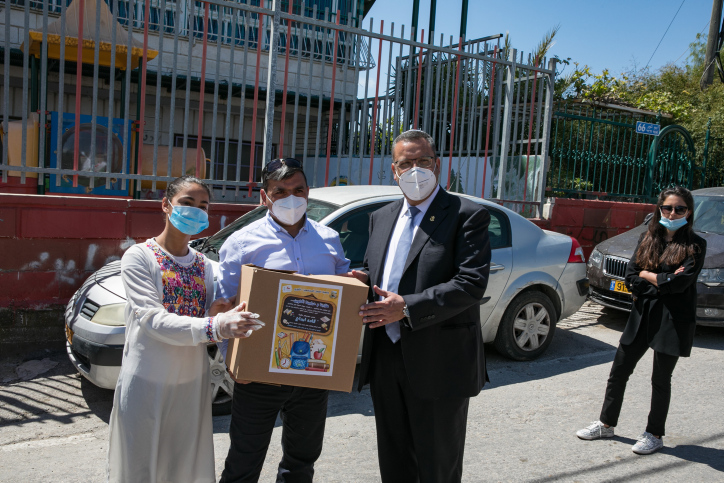 Israeli soldiers of the Home Front Command Unit and Jerusalem Mayor Moshe Lion give out food packages via a local NGO in the eastern Jerusalem neighborhood of Abu Tor on April 30, 2020. Photo by Olivier Fitoussi/Flash90.

“The conditions of the eastern part of the city are hopefully improving after the corona issue. People are very optimistic. Their complaints are being handled quickly. Many hard-core Fatah people in eastern Jerusalem are now praising the mayor and praising the government for what it did for them. The Palestinians found out who was there for them and who was not. In contrast, Fatah stole cartons of food.”