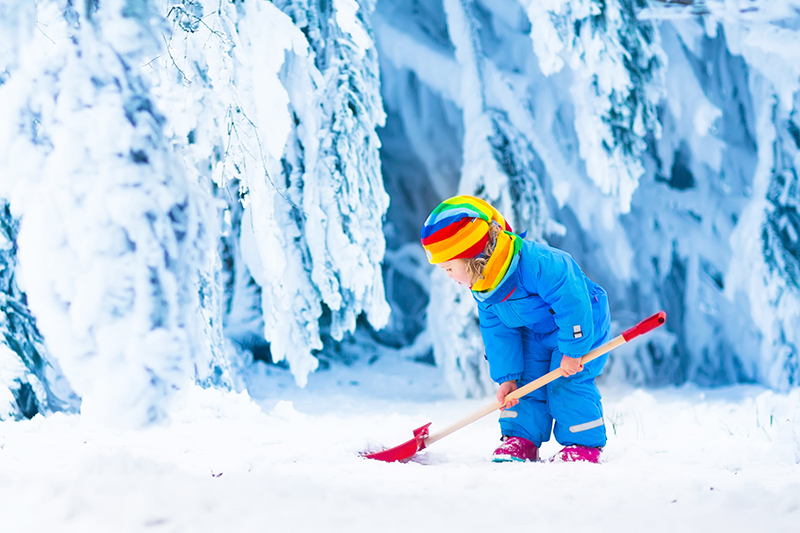 Snow excites some and scares others. For frum Jews, it also raises a host of halachic questions. In this article, we will address some of them.

Playing With Snow on Shabbos

Is snow muktza on Shabbos? R. Tzvi Pesach Frank, the chief rabbi of Jerusalem, was asked this question during a snowstorm in 1957. He responded that just like rain is not muktza, neither is snow. He also noted that the Talmud (Shabbos 51b) discusses crushing snow on Shabbos without mentioning that it might be muktza.

R. Moshe Feinstein (Igros Moshe, Orach Chayim 5:22) said snow isn’t like rain and ruled that snow that falls on Shabbos is muktza since it didn’t exist before Shabbos (and therefore is nolad). R. Yisrael Pinchas Bodner (The Halachos of Mukse, p. 165 n. 10) writes that R. Moshe Feinstein told him that snow is similar to “sticks and stones” – functionless objects – which are muktza. If so, even snow that fell before Shabbos is muktza.

Most poskim disagree with Rav Moshe, including R. Shlomo Zalman Auerbach (see Shemiras Shabbos Kehilchasa 16:44, 10 n. 14). He argues that one may touch, move, and even play with snow on Shabbos. However, making snowballs or snowmen is a different story. Shemiras Shabbos Kehilchasa rules that making snowballs is forbidden on Shabbos due to the prohibition of boneh (building). He bases this ruling on the Rambam (Hilchos Shabbos 7:6), who writes that making cheese is prohibited due to boneh, as a person “gathers together different parts” to make it. R. Shlomo Zalman Auerbach (ibid. n. 109) rules that one may throw snowballs prepared before Shabbos.

Interestingly, R. Moshe Stern (Be’er Moshe 6:30) rules that making snowballs, which quickly fall apart, does not violate the prohibition of boneh, and therefore children may make snowballs on Shabbos. Building a snowman, however, is forbidden as it is a more permanent structure. And one may not make shapes out of snow, or write in it, as doing so is considered a form of writing (Shulchan Aruch, Orach Chayim 340:4; Mishna Berurah 20).

Preparing For and Shoveling Snow

May one spread salt on public paths and sidewalks to prevent injury on Shabbos? Most Rishonim imply that crushing ice is only forbidden if the person crushing it intends to use the resultant water. No one who salts snow or ice has such an intention. Furthermore, spreading salt does not melt snow and ice; rather it “causes” it to melt (grama), which at most violates a rabbinic prohibition. Therefore, since snow and ice constitute a danger to the public (nezek shel rabim), it is permitted to salt public paths and sidewalks (Shemiras Shabbos Kehilchasa 25:9).

Is it permitted to shovel snow on Shabbos? As we noted above, most Achronim don’t consider snow to be muktza, and therefore it may be moved on Shabbos. Even if snow were muktza, muktza may be moved indirectly (“min hatsad”) especially if public safety is a concern.

Shoveling, however, is only permitted on a paved path or sidewalk, not on earth, due to the prohibition of choresh (smoothing out the ground). Also, one should be careful not to denigrate Shabbos by overly exerting oneself (Machaze Avraham 68; see Lev Avraham 49, based upon Shabbos 126b, which prohibits moving large objects on Shabbos) – although for the sake of a mitzvah exerting oneself is permitted.

R. Menashe Klein (Mishne Halachos 5:4) entertains the possibility that a person can shovel snow in an area without an eruv since rabbinic prohibitions are sometimes set aside if danger is involved (and carrying in most public places is only prohibited rabbinically). While he is hesitant to permit shoveling in an area without an eruv, he permits asking or hiring a non-Jew to shovel snow on Shabbos. Asking or hiring him before Shabbos would be advisable.

It, of course, goes without saying that one should not endanger oneself when snow or ice covers sidewalks and streets. Thus, the elderly, and others who may be more likely to fall, should stay home rather than trying to walk through dangerous or slippery terrain in order to make it to shul on Shabbos.

Based on a mishnah (Mikva’os 7:1), Rishonim discuss whether someone may immerse herself in 40 se’ah of snow if there is no mikveh around. The Mordechai (Shabbos 332) cites Rabbeinu Simcha who validates an immersion performed in snow, and R. Eliezer who insists that the snow must first melt. The Mordechai records that Rabbeinu Simcha changed his mind and agreed that a woman may not immerse in snow.

In his Beis Yosef (Yoreh De’ah 201), R. Yosef, Karo concludes that a person cannot use a mikveh made out of snow to fulfill biblical mitzvos, like tevilas niddah. In his Shulchan Aruch (Yoreh De’ah 201:30), however, R. Karo rules that a woman can use such a mikveh. The Rema adds that one should preferably adopt the stricter position. The Shach (ibid. 71) insists that under no circumstances should a woman immerse in snow, but others disagree.

Many poskim (Taz, Orach Chayim 159:29, Mishnah Berurah 160:58) are lenient about using snow (especially if there’s no water around) when it comes to netilas yadayim before eating bread, which is only a rabbinic requirement. If a person does use snow for netilas yadayim, he should say “al tevilas yadayim” instead of “al netilas yadayim.”

Some Achronim discuss whether one may fulfill the requirement of tevilas keilim – immersing new vessels used to eat or prepare food – with snow. Most Rishonim (although not the Rambam) assume that tevilas keilim is a biblical obligation, and therefore one cannot use snow to fulfill it. The obligation to immerse glass vessels, however, is only rabbinic, so the Chochmas Adam (73:19) rules that one may immerse them in snow in extenuating circumstances. Interestingly, R. Mordechai Yaakov Breisch (Chelkas Yaakov, Yoreh De’ah 41), who served as a rabbi in Zurich, Switzerland, suggests that electric appliances, which may be ruined if put in water, should be immersed in snow.

Snow poses halachic challenges, but it also presents numerous opportunities. During a snowstorm, one should offer assistance to those in need by shoveling their snow or even offering them food and warm shelter. Furthermore, snow reminds us of the purity associated with repentance (Yeshaya 1:18) and offers us the opportunity to marvel at the beauty of G-d’s creations.