The Gaza Strip has witnessed in recent days a sharp rise in the number of new Coronavirus (COVID-19) cases, and at the same time, members of the incendiary balloon terror units are threatening to resume attacks on Israel.

About 1,600 new infections were discovered in the Gaza Strip over the weekend, including at least four deaths. This is a steep increase after the number of all patients in the Gaza Strip was only about 3,000 just last week.


Morbidity in the Gaza Strip accounts for more than 50% of all new cases reported by the Palestinian Authority (PA).

To date, about 15,000 residents have been infected in the Gaza Strip and the number of active patients is currently more than 5,500.

To date, 65 residents have died in the Gaza Strip and 231 patients are in hospitals, 79 of them in critical condition.

Elements in the Gaza Strip are calling on the Hamas government to take drastic measures. The commander of the Gaza Police is demanding that a full closure be imposed for 14 days and that severe enforcement measures be taken against what he called “contempt” by the local public.

The European Hospital in Khan Younis is considering converting the entire facility into a facility for the treatment of corona patients in moderate to severe condition.

A few days ago, the large oxygen unit that operated in the clinic in the Sheikh Raduan neighborhood was transferred to the hospital to allow it to continue functioning. 64 patients are now hospitalized in critical condition and need oxygen treatment.

Hamas police transferred 150 detainees to an isolation facility in the Khan Younis area after they were infected with Corona.

A source in the Gaza Strip told TPS that local organizations and residents are calling on the Hamas government to declare the Gaza Strip a “disaster-stricken area” and seek immediate international emergency assistance.

The source said that Hamas has failed to manage the corona crisis in the Gaza Strip and that hospitals are facing collapse. According to him, the conditions of hospitalization and those in the isolation facilities are deplorable and the increase in the morbidity rate is expected to continue.

UN sources claimed last week that Hamas had issued an ultimatum to Israel through Egypt demanding to receive 40 respirators within a week. In the Gaza Strip, only 80-100 respirators are in good condition.

Hamas spokesman Fawzi Barhoum said Sunday that “the Israeli occupation imposes on Hamas the responsibility for everything that happens in the Gaza Strip, thus justifying the continued siege, bombing and aggression, and evading its responsibility for the suffering of two million Palestinians trapped in the Gaza Strip in a humanitarian catastrophe.”

Barhoum added that Israel’s conduct is “outlining the characteristics of the next phase” and the “Israeli occupation is not committed to ending the siege and is preventing the entry of medical equipment and supplies to deal with the Coronavirus, and therefore must bear all the consequences of continued siege, escalation and aggression.”

The pressure in the Gaza Strip is also increasing because Qatar will not guarantee Hamas a fixed amount of $30 million every month, as Hamas is demanding.

Against these developments, the members of the “attrition” groups and the incendiary balloon terrorists are saying on social networks that they should return to launching incendiary balloons towards Israel, as a means of pressure intended to force Israel to pass on medical assistance to Hamas.

Following the firing of a rocket at Israel on Saturday night, a cartoon was circulated on social media, in which the Coronavirus was seen pressing the button on a missile launch system, meaning that the pressure surrounding the Coronavirus in Gaza may translate itself into attacks on Israel as Hamas’ way of deflecting the pressure. 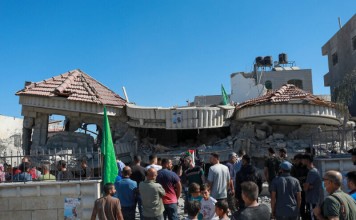 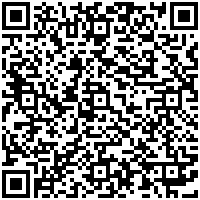