Religious Zionism Chairman MK Bezalel Smotrich on Monday posted on his Facebook page that the case of rape and pimping of female guards in an Israeli security prison that shocked Israel in recent days (Gilboa Prison Intelligence Officer Interrogated with Caution over Female Guard’s Rape by Arab Terrorist) is part of the much bigger story of Israel’s surrender to the terrorists and terror organizations.

Eventually, I hope you’ll understand why I chose to illustrate this report with the image of Smotrich and his faction member MK Itamar Ben Gvir.

“As a result, security prisoners receive much better, summer camp-like conditions in Israeli prisons than regular criminal prisoners,” Smotrich said. “They cook for themselves, enjoy cultural and leisure life, watch a multitude of channels on television and live in groups that allow them to communicate outside the prison walls and direct terrorism from the inside.”

The allegations by a female guard at Gilboa security prison that she was pimped out by her commanders to the leader of one terrorist faction behind bars were first filed in 2015. They have been ignored repeatedly, including during the reign of governments in which Smotrich served in a ministerial capacity, under Prime Minister Benjamin Netanyahu. Clearly, the Israel Prison service’s failure to protect its female guards was as shameful as its failure to keep security prisoners from escaping. On September 6, 2021, six such prisoners staged an escape through a tunnel they began digging under the Likud government and used to escape under the Lapid-Bennett coalition government.

Clearly, those system failures stretch over decades. One reason for that, according to Smotrich, is that “every time they feel ‘their conditions are deteriorating,’ they riot and threaten to go on a hunger strike. This puts the Israeli security system into fits of anxiety about a wave of solidarity riots in the Arab communities of Judea and Samaria, and they, in turn, subdue the prison service command which complies with their demands.”

“In this atmosphere of striving for peace at any cost and turning the terrorists into the landlords of the prisons, the female guards are abandoned and are used to fulfill the sexual desires of the prisoners. The main thing is to maintain the quiet,” Smotrich wrote.

The right-wing leader suggested that beyond punishing the individuals on the ground who were responsible for the alleged atrocities, the time has come to completely change the equation in the security prisons.

He recommended the IPS “cancel the organizational affiliation within the prison walls; periodically disperse the prisoners among the various prisons, move them from place to place once in a while; set their conditions at the minimum required in keeping with international law and the treaties to which Israel is a signatory; and in short, end the luxury conditions and start treating them as security prisoners and not as privileged people who live the good life at our expense.”

“It should be done drastically and all at once, with a willingness to quell prison riots harshly,” Smotrich noted, adding that the same harshness must be applied to the solidarity riots that would surely rise in response in Judea, Samaria, and Gaza.

“There may be a few difficult days, but if we respond decisively, it will turn the equation, restore deterrence and demonstrate to our enemies that terrorism doesn’t pay,” Smotrich concluded.

I, for one, know of one extremely qualified candidate to be the Internal Security Minister who would happily carry out these solutions, and then some. His name is Itamar Ben Gvir and he is currently in stalled negotiations with Smotrich over their expected joint run in the coming election. If these two fail to join forces again, it would deprive Israel of both a strong, religious right-of-center party, and of a potentially effective minister to manage the police, the prison service, and the clandestine police.

We have high expectations of his and Ben Gvir’s Knesset faction – they can’t let us down. 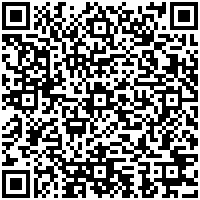