It was a night to remember as ten thousand residents of the city of Umm al-Fahm in Wadi Ara, north-central Israel took part overnight Thursday in the funeral procession of the three terrorists who murdered two Druze policemen on the Temple Mount two weeks ago.

The crowd, all proud owners of Israeli blue ID cards, waved Palestinian flags and called for the liberation of the Al-Aqsa Mosque from the “occupier” – that’s their own democratically elected government.


And, speaking of democratically elected governments, in attendance at the homage to the cop-killers were MKs Yousef Jabareen and Osama Sa’adi of the Joint Arab List, as well as the mayor of Umm al-Fahm.

Incidentally, all three murderers were named Mohammed Jabareen, which should be added to some trivia quiz someplace.

The crowds filled the streets to follow the late night funeral procession of the three Mohammed Jabareens, some with veiled faces. Residents fired shots in the air and shouted, “With spirit and blood, we’ll redeem you, martyrs,” and ” With spirit and blood, we will redeem you al-Aqsa.” Also, throughout the night massive fireworks were fired into the city sky. Now, that’s a funeral.

One of the terrorists (Mohammed Jabareen) was about to get married, and according to some residents who spoke to a Walla reporter, the funeral ceremony was his wedding procession.

In the crowd could be spotted the leader of the northern branch of the Islamic Movement, a Muslim Brothers’ Muslim Brother, the man who started it all, Sheikh Raed Salah.

The residents, many of whom receive their Social Security checks from the Zionist occupier, continued to shout slogans like “Um al-Fahm will not let them harm al-Aqsa,” “This is a day of celebration for the city,” “We will give our lives for al-Aqsa,” “Every Muslim should give his life for al-Aqsa,” “We won’t permit the cowardly Netanyahu and Erdan to harm Muslim honor,” and the all time favorite, “Our al-Aqsa forever,” which is also available on T-shirts and Burqas.

One resident told the Walla reporter that “the government held the bodies of the martyrs for 13 days in order to abuse the families and harm the Muslims.” He then promised that “this time the Intifada will continue until the violence against the Palestinians stops.” And concluded: “Umm al-Fahm, Gaza and Ramallah are the same.”

Yes they are, and nothing like a good anti-Israeli funeral procession in a city that’s part of a five-year, 5 billion shekel investment program, to remind us of this geo-demographic fact. Like Defense Minister Avigdor Liberman (Yisrael Beiteinu) said about issuing the folks in Qalqilya, in the Palestinian Authority, 14,000 building permits inside Israel’s Area C: it’s all part of our sticks and carrots policy.

In Umm al-Fahm, early Thursday morning, it was clear how this policy is being implemented: the Jews give over the carrots, the Arabs are all about sticks. 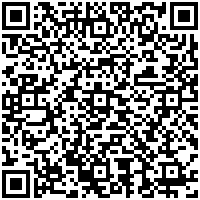