The State Opening Ceremony for Holocaust Martyrs’ and Heroes’ Remembrance Day, which was pre-recorded without an audience in Warsaw Ghetto Square at Yad Vashem on the Mount of Remembrance in Jerusalem, will be broadcast Monday at 8:00 PM Israel time.

Yad Vashem will transmit the ceremony complete with translation (except for the remarks of the President and Prime Minister) into English, French, German, Russian and Spanish on Yad Vashem’s website. The feed will also be broadcast via Yad Vashem’s Facebook page.

During the ceremony, six torches will be lit, and stories of the six Holocaust survivors will be presented via short videos. First torch: Zohar Arnon; second torch: Aviva Blum-Wachs; third torch: Haim Arbiv; fourth torch: Lea Meream Reuveni; fifth torch: Avraham Carmi; sixth torch: Yehuda Beilis. These videos were produced and directed by Shlomo Hazan, and will be available on the Yad Vashem website in the section dedicated to Holocaust Remembrance Day 2020.

Israeli singers Shiri Maimon and Shai Tzabari will participate in the ceremony, which will also include narrative pieces written by Holocaust survivor Jack Werber, recited by Israeli actor Zohar Straus. The MC for the ceremony will be Danny Cushmaro.

The ceremony will feature a traditional memorial service, including the recitation of a chapter from Psalms by Chief Rabbi of Israel Rabbi David Lau. The Rishon LeZion, Chief Rabbi of Israel Rabbi Yitzhak Yosef will recite the Kaddish mourner’s prayer, and Cantor Daniel Dahan will recite El Maleh Rahamim, the Jewish prayer for the souls of the martyrs.
The State Opening Ceremony will also be broadcast live via Israeli television on Channels 11, 12, 13, 9, 20 and online via Ynet and Walla News, as well as on Kan Radio and Galei Zahal. The ceremony will last about 75 minutes.

In addition to the broadcast of the ceremony, Yad Vashem will upload a special mini-site dedicated to Holocaust Martyrs’ and Heroes’ Remembrance Day 2020. This mini-site comprises relevant content, including a special online exhibition related to the Central Theme entitled, “Rescue by Jews: ‘One for All,'” as well as relevant educational materials.
On the following day, Holocaust Remembrance Day, April 21, 2020, there will be a two-minute siren that will sound across the country at 10:00 AM Israel time. On this day, at Yad Vashem, the traditional Wreath-Laying Ceremony will take place in the Warsaw Ghetto Square at the base of the Warsaw Ghetto Uprising Monument in a different format and without an audience. 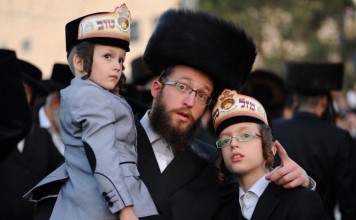