The two terrorists who committed the terror attack in Elad on Israel’s Independence Day last week, murdering three people and wounding four more with axes and knives were captured on Sunday morning, hiding outside of the town of Elad.


After 60 hours of searches, the two terrorists were found and captured alive, as they were hiding underneath some bushes. According to Nir Dvori, they were found in a forest near Rosh Hayin.

There are a lot of comments on social media about how they were given cigarettes after their capture, instead of a bullet.

Police forces, in cooperation with the Shin Bet security agency and other special units, conducted a methodical manhunt , searching for the two terrorists, residents of the Jenin area.

“In the last two days, the best forces in the police, the Shin Bet, and the IDF have worked together to get their hands on them, and so it has happened. The intensive activity along a complex terrain route deserves all praise. We will continue to pursue with determination those who seek our harm at any time, and everywhere, and we will reach them,” he said.

Reports indicate that one of the terrorists left behind a will before committing the attack, in which he stated that the reason he carried out the attack was the alleged damage Israel was causing to the Temple Mount, a direct result of Hamas’ incitement on the issue.

The two terrorists who fled the scene were identified as Assad Yussef Al-Rafa’i, 19, and Tzabhi Imad Abu Shakir, 20. In a rare occurrence, the police published their names and photos to warn the public against them.

The Shin Bet cleared for publication that Oren Ben Yiftach, the first victim of the attack, unwittingly drove the terrorists to the scene thinking he was taking them to work in a Synagogue, and upon their arrival in Elad, they brutally murdered him in the car.

In the meantime, two victims hospitalized with severe head injuries are still in critical condition. The victims, a 75-year-old man and another in his 40s, are hospitalized in Beilinson Hospital in stable condition and on life support. Their lives are currently not in danger, the hospital said. 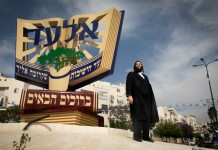 Where Am I: City of Yeshivos