Netanyahu thanked Biden for America’s unequivocal support of Israel’s right to defend itself.


Netanyahu’s spokesperson said the prime minister emphasized “Israel is doing everything to avoid harming persons who are uninvolved; the proof of this is that the buildings in which terrorist targets are being hit by the IDF are evacuated of uninvolved persons.”

The IDF gave all international media with offices in the Al Jala high-rise building in Gaza City one hour’s notice on Saturday to take their equipment and leave the building in advance of an Israeli air strike on the tower, where Hamas central military intelligence offices were located.

“We are shocked and horrified that the Israeli military would target and destroy the building housing AP’s bureau and other news organizations in Gaza,” Pruitt said. “They have long known the location of our bureau and knew journalists were there. We received a warning that the building would be hit. We are seeking information from the Israeli government and are engaged with the U.S. State Department to try to learn more.

“We narrowly avoided a terrible loss of life. A dozen AP journalists and freelancers were inside the building and thankfully we were able to evacuate them in time.”

“The world will know less about what is happening in Gaza because of what happened today.”

One bare line in the middle noted, “We received a warning that the building would be hit.”

Where else in the world and from which other nation’s military would any news agency or group of journalists receive a one hour’s warning, when they are in the same building as a strategic target working to murder their civilians? 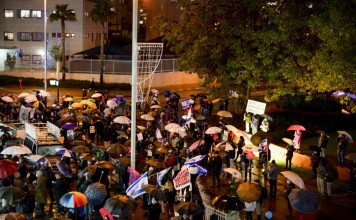