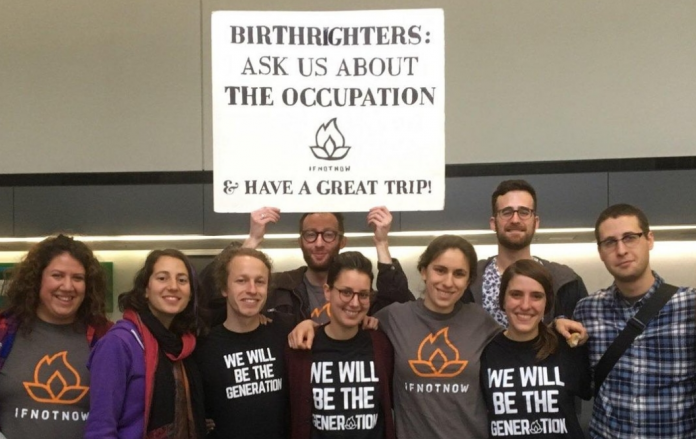 In the US, there is a Jewish Voice for Peace, an If Not Now, a J Street, an Open Hillel, and a Tzedek Chicago – and probably a hundred other Jewish organizations with the same general objective. All would deny it, but they act politically to bring about the end of the Jewish state and the re-imposition of the historic exile of the Jewish people.


Although some of these groups claim to support “nonviolent change,” if they were to be successful in their endeavors, Jewish blood would flow (again) like water. And make no mistake about this – the conditions that enabled the Jewish people to survive as a people in the 2000+ year diaspora don’t hold in the 21st century. The end of the Jewish state would most likely be the end of the Jewish people.

Can they be that naïve? I am surprised that the ones with three-figure IQs believe that the ideal of nonviolence is attainable. But they seem to be able to accept a remarkably great degree of cognitive dissonance.

This phenomenon is rare among other peoples. I haven’t encountered a “Hindus for a Pakistani Kashmir” group, or a Greek “Keep Northern Cyprus Turkish” organization, have you? But in addition to the countless Jewish and Israeli groups dedicated to ending Jewish sovereignty in what they relish calling “Palestine” (or “Israel/Palestine” at best), there are countless Jewish activists in Students for Justice in Palestine and similar non-Jewish groups. Some are even leaders in the anti-Israel movement.

Sometimes they reconcile the contradiction by believing that justice supports the case of the Palestinian Arabs. The can think this despite the actual history of the conflict as well as the warfare and truly horrific terrorism that have been the tactics of the Arab side, because they buy into a narrative that casts the Arabs as the indigenous “brown” inhabitants of the region who have been colonized by (primarily) “white” European Jews, supported by the rest of the white, privileged, world.

This narrative was initially introduced by the KGB’s presentation in the 1960s of the antisemitic Palestinian Arab opposition to the Jewish presence and especially sovereignty in the region as a movement of national liberation, despite the fact that Palestinian nationalism had never been particularly strong before then, and decolonization, despite the fact that half of Israelis were native to the Middle East (and the rest represented no colonial power).

In the years since then, the narrative – which by now became a full-fledged self-consistent conceptual scheme – was given impetus by the UN which passed its “Zionism is racism” resolution in 1974, and then widely popularized by Edward Said’s book, Orientalism (1978), which fallaciously delegitimized attempts by non-Arabs to take any position at all on the Middle East. The connection to racism was reestablished after the 1991 repeal of the UN resolution, when the 2001 Durban Conference on racism turned into a theatrical anti-Israel festival and gave birth to the BDS movement that so many of today’s anti-Israel Jews support. Finally, the 21st century idea of “intersectionality” linked Palestinianism with other popular causes of the Left, especially in the universities.

All of this appears from the outside to be a house of cards, resting on faulty historical analysis. But once inside, the argument that the Jews are the paradigmatic “white” oppressors of the oppressed (and therefore innocent by definition) Palestinian Arabs seems reasonable. In this scheme, the Jewish state appears as emblematic of all that is unjust in the world, matched in its devilishness only by the United States of America.

But the Jewish proponents of this misozionist* world-view are sometimes uneasy. There is the problem of Arab violence, which is not so easily justified, especially when it involves beheading babies or slaughtering 13-year old girls in their beds. There is the problem of the Palestinian failure to meet modern standards for decent treatment of LGBTQ people, women, and even animals. And finally, there is the need to wriggle and dance to try to establish that misoziony is not antisemitic, given that it involves delegitimization, demonization, and double standards, the “Three D” criterion of Natan Sharansky.

One way that misozionist Jews have found to ameliorate their discomfort is to argue that their position is actually an expression of their Judaism. An early (1990s) proponent of this view is Michael Lerner, the publisher of Tikkun Magazine and author of The Politics of Meaning. Emphasizing the “social” commandments of the Torah and the writings of the prophets, Lerner and his followers redefined the mitzvot of Judaism in terms of (formerly) secular leftist social action. Given the position of the Left that justice is on the side of the Palestinian Arabs in their conflict with Israel, a “Tikkunist” Jew could see his misoziony as not only compatible with, but commanded by, Judaism.

And now, making it even more explicit, comes a new book by Atalia** Omer, a Jewish woman born in Jerusalem with a Harvard doctorate who teaches Religion, Conflict, and Peace Studies at Notre Dame University. The book is called Days of Awe: Reimagining Jewishness in Solidarity With Palestinians. It is a study of the Jewish misozionist movement from an appreciative standpoint, and it brings together all the concepts so beloved of the contemporary “woke” academic Left. Here is an almost randomly selected passage from the book: 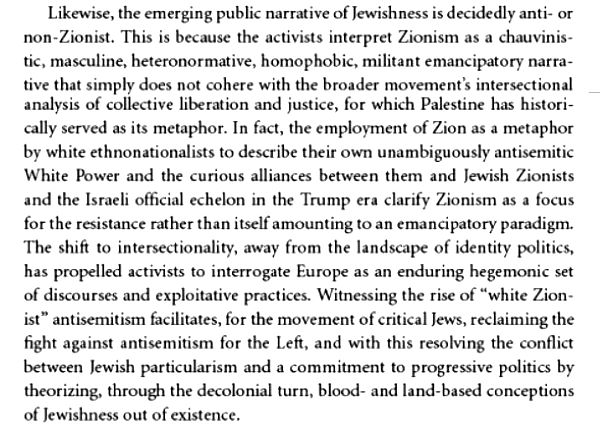 I hadn’t noticed the alliance between the white power types and Jewish Zionists that she mentions, but I do note that she hits absolutely every note on the intersectional scale, including the ever-potent image of Trump, as she struggles to neutralize the fundamental antisemitism of her position. And if Zionism is chauvinistic, masculine, heteronormative, [and] homophobic,” what is the Palestinian movement with which she is so proud to show solidarity?

The “reimagining” of Judaism in terms of leftism is an act of enormous arrogance. The twists and turns that it requires are remarkable, and demonstrate, yet again, the great adaptability and virulence of the virus of antisemitism – which has found a susceptible, even welcoming, host in the Jewish Left.

** Atalia (also spelled “Athalia” in transliteration) was the daughter of Ahab and Jezebel. She reigned as Queen of Judah for six years, and was known for killing all possible claimants to the throne and for introducing the worship of Baal into Judah before she herself was assassinated.