There is a growing problem in Israel and especially in Jerusalem lately.

Arabs are increasing a spiral of attacks on people identified as religious Jews.

It is happening in Yafo, Lod, Ramla, Acco and especially in Jerusalem.

In the eternal capital of the Jewish people the attacks have been focused near the Damascus Gate (Sha’ar Shechem).

This elaborate and historic gate of the old city offers the Haredi community the most direct route to the Kotel.

It has never been totally safe or comfortable for Jewish traffic through this gate which is a hub for Arab pedestrian traffic. Things have always happened there, but it’s getting worse and the attacks more brazen.

Recently there also have been large scale riots there which called for police intervention.

The police have their hands full and have come upon a solution; redirect Jewish pedestrian traffic from the problematic major gate.

Did you get that?

Does it remind you of Gush Katif?

Arabs constantly attack thousands of Jews who refuse to be intimidated. The army must find a way to protect Jews in the Jewish state.

How? Expel the Jews.

No more attacks on those Jews. Problem solved.

Almost fifty years ago I recall a mini drama that took place at Sha’ar Shechem.

Even then it was a hot spot, though not like today.

There was a man, a great rabbi with unique powers of vision.

He insisted upon placing a mezuzah on Sha’ar Shechem.

The Police opposed him. They claimed that something so blatantly Jewish in an “Arab area” was a provocation and insensitive.

The rabbi tried to explain how it starts with denying something symbolic like a mezuzah or a flag and ends up with increasing intimidation and violence and loss of any trace of Jewish sovereignty.

He could not convince the police or much anyone else of his vision at the time.

He tried putting up the mezuzah on numerous occasions; arrested each time.

How interesting; even without a mezuzah on the gate the Arabs are still not content.

Any ideas on how we can further please them?

Shalom Pollack is currently writing his new book, “Despite ourselves, an eyewitness account. 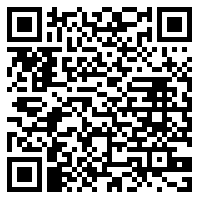