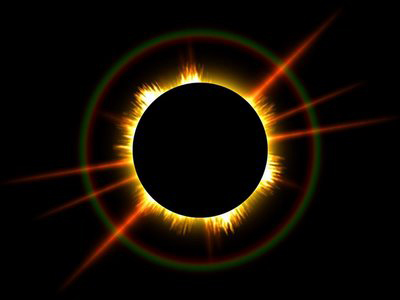 A recent article on JewishPress.com concerned a series of lunar and solar eclipses predicted to occur close to Pesach and Sukkos during the Jewish years 5774/5 and the Gregorian calendar years 2014 and 2015.

The lunar eclipses are being described as “blood moons,” because the color red is often associated with lunar eclipses. However, it is not at all clear in advance that any given lunar eclipse will be red, because the color of the moon is dependent in part on atmospheric conditions at the time of the eclipse. So we do not know now whether these will indeed be red or “blood” moons.

These predicted phenomena have been linked to the prophetic passage that states, “I will set wonders in the heavens and the earth: blood and fire and pillars of smoke; the sun will turn to darkness and the moon to blood before the coming of the great and awesome Day of Hashem” (Yoel 3:3).

The Gemara comments on the significance of solar and lunar eclipses: “The rabbis taught in a beraisa: ‘At the time the sun is stricken [i.e. when its light is diminished], it is a bad omen for the world…. To what can this be compared? It is comparable to a king who made a banquet for his subjects, and placed a lantern before them. He [subsequently] became angry with them and said to his servant, ‘Remove the lantern from before them and let them sit in darkness.’ ”

These predictions become even more intriguing when you factor in the prophecy from Yoel, particularly because his language referring to “blood and fire and pillars of smoke” has been incorporated into the Haggadah, which will be read on the night of the predicted lunar eclipse and two weeks after the solar eclipse. The ArtScroll commentary notes that these words refer to the Messianic rather than the Egyptian Redemption, which makes them particularly relevant to events of today.

Words of caution, however, are appropriate.

It is not a complete surprise or coincidence that lunar eclipses fall out on the first night of Yomim Tovim, because Pesach and Sukkos always begin on the night of a full moon, and lunar eclipses occur only on those occasions. (At this time the earth is directly between the sun and the moon and its shadow can reach the moon.)

Further, one would think that in order for them to be significant to us as Jews, these phenomena would have to be visible from Israel, since as we see in the Gemara cited above, lunar eclipses seem to be tied to the Jewish people. But according to NASA, only one of the four lunar eclipses will be visible from Israel – the one on the first night of Sukkos (September 28) in 5775/2015.

Concerning solar eclipses during these years, only one of the two (the solar eclipse of March 20, 2015/Rosh Chodesh Nissan) will be total. The total eclipse will not be visible from Israel, though Israel will see a partial eclipse at that time. (The area of visible total eclipse for this event will fall in the Northern Atlantic between Iceland and Western Europe.)

But again, since the Gemara says that eclipses of the sun refer to the non-Jewish nations, the fact that a total eclipse will not be visible from Israel would seem to make it less significant to us in a religious sense. In addition, solar eclipses are not tied to the Yom Tov calendar, which is based on lunar cycles.

Despite the stated caveats, it is fascinating that the eclipses will occur in such a manner, especially because of the prophecy and the Gemaras that describe the influences attributed to eclipses. But this leads to an important question: Why would prophecies of cultural collapse be associated with Pesach and Sukkos?

The answer is clear.

On Pesach, the overriding event is the fall of Mitzrayim, which allowed Am Yisrael to escape slavery and march to Har Sinai. If the surrounding non-Jewish culture had not collapsed, we would have been unable to begin our national life as the people of Hashem and Torah. The collapse of the principal world culture at that time is crucial to the events of Pesach. This was the major historical event that facilitated the creation of Am Yisrael and the introduction of Torah into the world. (Other catastrophic collapses, like the Great Flood, the collapse of the Tower of Babel and the destruction of Sodom, were not directly linked to the creation of Am Yisrael and the acceptance of Torah, so the collapse of Mitzrayim was different and crucial.)

How is Sukkos linked to catastrophic events? This is also clear.

Sukkos is directly connected to prophecies concerning the future collapse of the cultures of Yishmael and Eisav at the time of Mashiach. We know this from the astounding haftaras we read on Sukkos, describing the War of Gog U’Magog, the climactic war involving all of civilization, that will occur at that season.

On the first day of Sukkos we read (Zechariah 14:1-3), “Behold, God’s awaited day is coming and your spoils will be divided in your midst. I shall gather all the nations to Jerusalem to wage war…. Then Hashem will go out and wage war against those nations….”

And on Shabbos Chol HaMoed Sukkos we read (Yechezkel 38:18ff ), “It shall be on that day, on the day that Gog comes on the soil of Israel – the words of my Lord Hashem – My raging anger shall flare up. For in My indignation and in My blazing wrath I have spoken…. I am against you, Gog, prince, leader of Meshech and Tubal. I shall…bring you to the mountains of Israel…. You shall fall on the mountains of Israel, you and all your cohorts and the nations that are with you….”

So Pesach and Sukkos are directly linked to catastrophic events, one in the past and one predicted for the future. But it’s important to emphasize that we should not look upon these events with depression or fear. We see this clearly in the events of Pesach, because at that time, though the surrounding non-Jewish culture collapsed, the Children of Israel were released to perform the service of Hashem, which our nation was created for in the first place.

This was the greatest simcha in the world, and future events predicted for Sukkos should also be viewed in that light. Sukkos is called z’man simchaseinu… the season of our simcha, because at that time the reign of falsehood will be ended forever and the Geulah Sheleimah will occur with the coming of Mashiach ben Dovid. The entire world will become filled with Torah and “Hashem will be One and His Name One.”

The challenge is that in order to be on the side of simcha and victory, we have to attach ourselves to the culture of Torah, not the collapsing anti-Torah culture that rules the rest of the world. Thus, the Gemara in Sukkah that discusses the significance of eclipses ends with this remarkable passage:

Recently we read in Parshas Lech Lecha that Hashem took Avraham Avinu “outside,” which the Midrash tells us means Hashem took Avraham “outside of the space of the world and raised him above the stars” (Rashi on Bereishis 15:5). This means Avraham and his descendants, the Children of Israel, as a nation, are above the confines of nature and logic. Our very existence is miraculous and we are not bound by the “logic” that binds other nations to their earthly existence.

All of Jewish history from the days of Avraham Avinu is beyond logic. “Logically” speaking, after the millennia of hatred and destruction directed against us, there should not be one Jew in the world today who still keeps the Torah. It is impossible, yet it is true. We are the nation that has come back from seeming non-existence time and time again. How did we get through the First Churban and the Second Churban? How did we get through the Crusades? The Inquisition? Stalin? The Third Reich?

A few weeks ago we were in Pinsk, Belarus, the home of countless gedolim over the centuries. Before World War II, Pinsk was eighty percent Jewish. After the war there was almost no one left. But today there is a flourishing Torah revival in Pinsk. Where did it come from? Rabbi Moshe Fhima, who almost single-handedly runs this community, doesn’t worry about what is “possible.” He does what he has to do, and Hashem assists him by resurrecting the “dead.” Multiply this miraculous scene by thousands or millions and you will see that the entire existence of our nation is beyond the apparent “rules” of nature, exactly according to the blessing Hashem bestowed upon Avraham.

Thus, when dire predictions are given to the world, we, the Jewish people, do not have to be afraid. In fact, we are adjured not to be afraid, as long as we grasp on to the Life Preserver called Torah.

What does this have to do with Chanukah?

Chanukah is the only Yom Tov that begins on the twenty-fifth day of the month, during the period of the waning moon. Each night, as the moon becomes smaller, we light more flames to illuminate the darkness. Do you grasp this? As the world gets darker, we light more and more flames to illuminate the world. What flame illuminates the world? The Flame of Torah, the light emanating from the Creator of the Universe, in Whose Hands are life and death.

As we light the seventh candle of Chanukah, the darkness around us seems impenetrable. And then what happens? Our Chanukah lights beat the darkness. On the eighth night, when all our lights are burning and the darkness outside is still very deep – the moon reappears. We have brought light out of darkness. The new month of Teves is proclaimed, and the moon, which represents the Jewish people, begins to increase in size.

This is techiyas hameisim – the resurrection of the dead, a process that has occurred over and over in Jewish history because we are a people that never dies. We survive everything. It is no accident that the second berachah in every Shemoneh Esrei ends with the words “Blessed are You, Hashem, Who revives the dead.”

Thus, Chanukah is the quintessential Yom Tov of galus, of exile. Chanukah begins in darkness and ends in light, just as our present galus began in darkness and will end in light. Chanukah tells us that if we live by Torah, we will turn darkness to light and survive. Our light will cause light to fall upon the entire world.

So we are not afraid of dire predictions. In fact, we should be filled with simcha: “From the straits I called upon God. God answered me with expansiveness. Hashem is with me; I have no fear” (Psalm 118).

May we soon see the great and awesome Day of Hashem.