A anti-Semitic website that is now shut down offered users the opportunity to trade a cryptocurrency called the “HoloCoin,” a reference to the Holocaust, in which Jews and the ashes of Jews burnt can be purchased or sold.

TheHolocoin.net, which was purchased on April 2 and registered with the website-building platform SquareSpace, is no longer accessible. However, the valueless virtual currency is still being traded on trading platforms such as ForkDelta.

StopAntisemitism.org was one of the first to draw attention to the anti-Semitic cryptocurrency.

“This has to be one of the most vile and atrocious anti-Semitic incidents we have yet to come across,” Liora Rez, executive director of StopAntiSemitism.org, told JNS. “For someone to erect and orchestrate a plan where they can buy the ashes of dead Jews as currency on a trading platform clearly shows the blatant hatred of Jews that exists in society today.”

Holocoin.net offered two currencies—“JEWS” and “ASH”—and its founders are online users that go by the usernames “Smaug Hitler” and “30YearOldHimmler.” The virtual currency is being promoted as an “ERC-20” token, which means it is designed for use on the Ethereum platform, an open-source blockchain-based distributed computing platform, and may be transferred to a cryptowallet.

The cryptocurrency quickly found its way onto online forums and social-media sites.

A page on the website Reddit that promotes HoloCoin describes it as “a cryptocurrency that recreates the Holocaust” and says that “15,300,000 JEWS were created, the team is airdropping JEWS and [it] is up to you if you wanna save them or let them burn.” 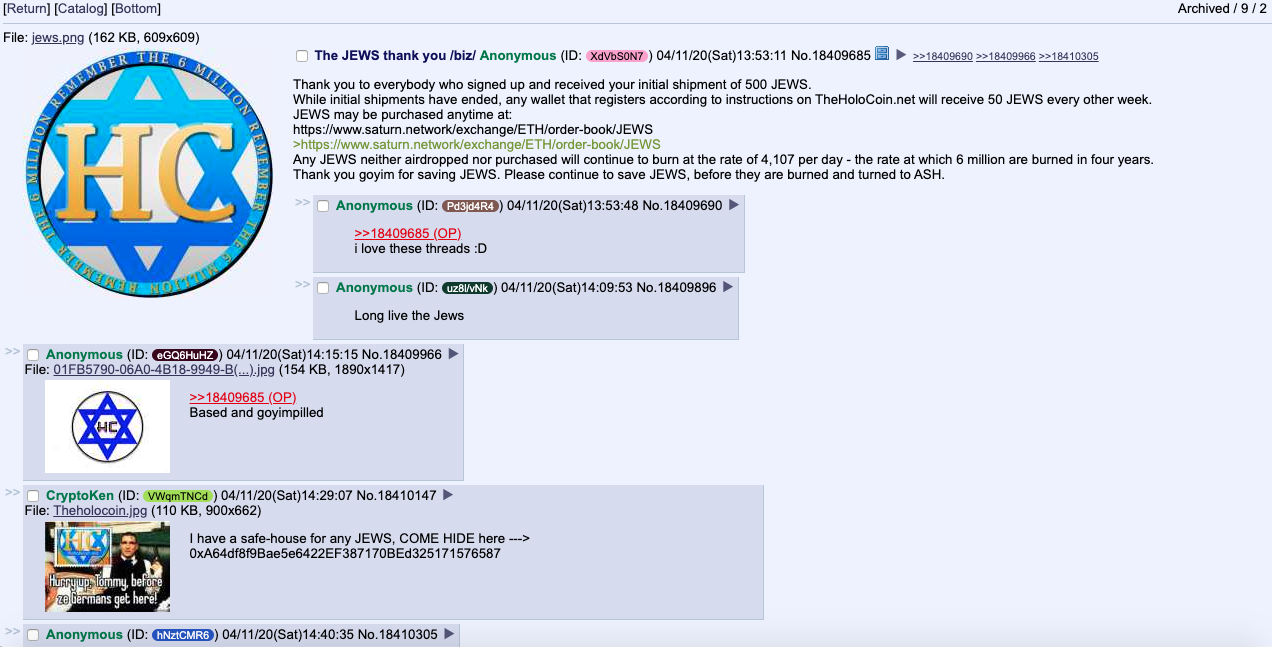 A thread on the site 4chan discussing the “HoloCoin.” Source: Screenshot via StopAntisemitism.org.

A thread on the website 4chan about the HoloCoin discusses those who purchased the cryptocurrency, saying, “Thank you to everybody who signed up and received your initial shipment of 500 JEWS. While initial shipments have ended, any wallet that registers according to instructions on TheHoloCoin.net will receive 50 JEWS every other week. JEWS may be purchased anytime.”

The message continued saying, “Any JEWS neither airdropped nor purchased will continue to burn at the rate of 4,107 per day—the rate at which 6 million are burned in four years. Thank you goyim for saving JEWS. Please continue to save JEWS, before they are burned and turned to ASH.”

The 4chan thread also features the cryptocurrency’s emblem: a large circle with “Remember The 6 Million” around its border with a large blue Star of David in the center, along with the letters “HC.” The banner photo for HoloCoin’s Twitter page has a Star of David that says “ash” around it, with a shadow in the background of the Pepe the Frog meme.