Just outside the entrance to the United Nations, a famous Jewish prophecy is engraved into the plaza’s Isaiah Wall: “They shall beat their swords into plowshares. And their spears into pruning hooks; nation shall not lift up sword against nation. Neither shall they learn war any more.”

Sadly, wars continue to be fought across the Middle East, and Israel still strives to maintain its Qualitative Military Edge over other nations in the region. Yet more and more, wars are changing form, and the effectiveness of conventional weapons is changing as well.


Palestinian terrorists still use guns and rockets. Many now use vehicles for ramming attacks and kitchen knives for stabbings. The Israel Defense Forces uses sophisticated weaponry in response.

Yet the current battle for the land of Israel oftentimes is not fought with conventional weapons. Rather, Israelis and Palestinians are staking their claims to the land of Israel with facts on the ground. These “facts” primarily include building and the planting of trees.

While swords may not be turning into plowshares, plowshares have become modern-day swords.

Last week, Israel’s fragile government was put to the test over the planting of trees in the Negev Desert. The Negev represents the largest swath of southern Israel’s tiny landmass and the least-developed portion of the country. Most of the Negev lies empty.

Much of the land has been inhabited by traditional nomadic Bedouin. They generally don’t live in organized communities but in crudely built shanty-shack villages. They settle on land often regardless of ownership. The illegal land-grabbing has become increasingly rampant in recent years as the Bedouin population grows, and the government has come up with few solutions.

In order to prevent additional land takeovers, the Keren Kayemet LeIsrael (KKL) has been planting forests on key tracts of the desert. The afforestation has become a major point of contention for Bedouin, as well as for the anti-Zionist Ra’am Party, which is part of the coalition government.

Ra’am leader Mansour Abbas claims that the trees are being built on privately owned land, while KKL asserts the land belongs to the State of Israel.

Yet Abbas has more leverage. The Arab Israeli party is the kingmaker of the current Israeli governing coalition. Without the four votes of Ra’am, Israel’s anti-Netanyahu “change government” currently led by right-wing Prime Minister Naftali Bennett will collapse, and Israel will be thrust into a new round of elections.

In response to the tree-plantings, Abbas asserted: “We will not vote with the coalition until the tree plantings in the south are stopped.”

Sure enough, the plantings have stopped.

Just further north in Judea, battles for land are taking place in “Area C”—disputed territories designated under full Israeli military and administrative control as part of the controversial Oslo Accords.

“Area C” is the home to all of the suburban Jewish communities commonly referred to as settlements. The Israeli government has put strict limitations on the building of new settlements and the expansion of existing communities.

The Palestinian Authority has administrative control over “Areas A” and “B,” and can build freely in those zones without Israeli approval.

Palestinians and Bedouin both have been making illegal land grabs in “Area C.” Much of the illegal Palestinian building there has been enabled by European funding and been met with silence by successive Israeli administrations. In addition to building, Palestinians grab land by planting olive groves and vineyards, and fencing them off with little to no consequences.

Deep in “Area C,” in a sparsely populated area, are small Jewish settlements of Ma’ale Amos and Ibei HaNahal. Adjacent to Ibei HaNahal is a small Jewish-run farm, known as Arugot Farms. The farm owners have planted a vineyard on the edge of their property.

The farmers claim that the vineyards help solidify the small, isolated block of Jewish settlers against land takeovers, and that Arabs have been planting trees on land they do not own in nearby hills.

Yet recently, the Civil Administration has determined without performing a land survey that the farm’s small vineyard exceeds the property’s boundaries. Meanwhile, no Arabs claim that the property belongs to them.

Last week, the government ordered that the Jewish vineyard be razed. The original orders for demolition were set to be executed today on Tu B’Shevat, the Jewish new year for trees. Public pressure convinced the government to place a temporary stay on the demolition, but the order remains intact.

Several miles away from Ibei HaNahal, to the north of the large Israeli settlement of Efrat, both Arabs and Jews are taking to planting of trees to claim a small strip of land—technically in Jewish-controlled “Area C”—between the Jewish community and the Arab-controlled city of Bethlehem.

The hill is immediately adjacent to the ancient Solomon’s pools archeological site. The pools were likely built by King Herod, who built the Second Jewish Temple, and were part of a long aqueduct system that brought water from the Hebron Hills deep in Judea to the Temple Mount.

Arabs have been illegally constructing houses on the hill between the pools and the edge of Efrat.

Over the past week, Arabs have planted trees all the way up to just meters away the retaining wall at Efrat’s edge. On Friday, Jews planted their own rows of trees on the remaining parcel of land. On Saturday, Arabs removed them.

The battle for the land of Israel rages on. And creating lasting facts on the ground has necessitated the turning of ploughshares and pruning hooks into the modern-day swords. 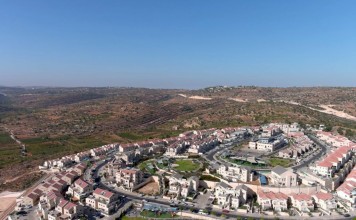