{Written my Prof. Hillel Frisch for the BESA Center}

On Friday, December 13, an Israeli officer and his NCO, standing near a home in the village of Nabi Salih, were verbally assaulted by a young woman. Emboldened by their refusal to respond, she proceeded to shove, slap, and kick them. She was not only actively encouraged by girlfriends who were eagerly filming the event with their smartphones, but her mother – who, along with her elder sons, has a long history of violent protest – came out of the house to help her daughter assault and verbally abuse the officers. (If nothing else, this incident exposes once again the falsehoods spread by organizations such as “Breaking the Silence.”)


To add insult to injury, the girl’s father, Bassem al-Tamimi, accused the soldiers on Facebook – in excellent English – for entering his home, pillaging it, and stealing a laptop. Al-Tamimi is a professional inciter to violence who commands a salary for that purpose as an employee of the Palestinian Authority’s Ministry of the Interior.

These events would be unthinkable in any Middle Eastern regime or even, dare one say it, in the states that make up the European Community, which has done so much to secularize the doctrine of turning the other cheek.

Fortunately, the Israeli authorities had the sense to return to the home and arrest the young woman and her bellicose mother for assault. But this is hardly sufficient. The young woman’s friends, all of legal age, should also be brought to court, not only for having done nothing to prevent illegal and indecent behavior but for having joined in. Even more critical is for the father to be summoned by the relevant authorities to investigate the charges he levied against the Israeli soldiers. If those charges are proven false, he should be prosecuted for slander.

At first glance, this appears to be a relatively minor event, concerning the officers, the young woman who assaulted them, and her parents and friends. However, its repercussions are far wider.

It has been long known that during times of relative calm, the willingness of Israeli youth to join fighting units declines and the attractiveness of joining technologically related units, where they can learn skills highly valued in the marketplace, increases. The lull since the last offensive in 2014 in Gaza has already produced this effect.

This recent incident, instantly disseminated via every possible new media channel, can only dampen young people’s willingness to join such units. Israeli youth ask themselves, quite reasonably, why they should not only put their lives on the line but tolerate such humiliation as well. As it is, many Israeli youth question why Elor Azariya, a soldier who shot a terrorist as he lay on the ground after he attempted to kill soldiers at a checkpoint in Hebron, was sentenced to a year and a half in prison.

That Israeli officers did not respond to a humiliating assault, possibly out of fear of disciplinary or legal retribution, raises doubts about the Israeli military’s resolve to stand by its rank and file. Prospective soldiers don’t want to become victims of the doctrine of turning the other cheek.

This incident also sends a dangerous signal to the many Palestinians who want to harm Israelis. Anyone viewing the two-minute video can clearly see how the numbers encouraging the assault grew as the passivity of the officers continued. It begins with two girls, a third joins in, and then the mother enters the fray with two young boys. The assault also becomes increasingly brazen in the face of the officers’ passivity.

One can safely assume that the weaker the IDF looks, the greater will be the willingness of Palestinians to join the ranks of attackers in larger, more charged, and more dangerous scenarios.

Israel must make clear that turning the other cheek is not its doctrine. It is as poisonous in this environment as the blood libel, another import to the area from Europe, which a leading Israeli Islamist, Raid Sallah, is now disseminating against Israel.

Israel should take its cue from its Palestinian cousins: no to the other cheek; yes to measure for measure. Those involved should pay for their actions to the fullest extent of the law. 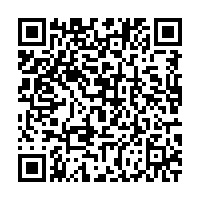