Post-US election number-crunching has revealed that somewhere between 70% and 75% of American Jews voted for Joe Biden despite President Donald Trump’s accomplishments on Israel’s behalf. This is not surprising, as all the major polls taken of American Jews show that they put Israel at the bottom of their list of political concerns. According to a 2020 study by the Ruderman Foundation, only 4% of American Jewish voters identify Israel as their first or second most important election issue. Some 43% prioritize health care, 28% prioritize the problem of gun violence, and 21% prioritize Social Security and Medicare.


US Jews’ strong tilt toward the Democratic candidate in 2020 is consistent with their voting history. US Jews have been ardent supporters of the Democratic Party ever since the early 20th century, no matter who was leading it or who was representing the Republican Party. For most American Jews, the US is essentially a one-party system. This is ironic, as many of their parents and grandparents came to the US to escape the authoritarian or totalitarian regimes of Europe.

Generally speaking, the Democratic Party has been friendly over the years toward Jewish causes and concerns, at least in terms of its public statements. But President Trump upped the ante.

Trump recognized Jerusalem as Israel’s capital and recognized Israeli sovereignty over the Golan Heights. His administration stopped considering Israeli neighborhoods in the West Bank illegal. He facilitated the Abraham Accords, which led to the public opening of diplomatic relations between Israel and the Gulf States of UAE and Bahrain. He issued an executive order against antisemitism. Arguably, no American president other than Harry Truman, who recognized the newborn State of Israel, or Richard Nixon, who supplied the critical airlift during the Yom Kippur War, has done more for the Jews and the Jewish State.

Many of these accomplishments were promised on the campaign trail for decades by other US presidential candidates, but none was fulfilled until Donald Trump took office—yet his apparent love for the Jews is not reciprocated by American Jews. Why not?

Trump is not an easy person to like. He is a complicated man, to say the least. Some of his personality traits are not what many would desire in a personal friend. Most people recognize that electing a president is different from befriending someone, but many American Jews—perhaps many people in general—want leaders for whom they can feel affection and who possess a character they respect.

Dubious character is a valid reason not to vote for a candidate, but it is not sufficient to explain the exceptionally low level of Trump’s popularity among US Jews.

As I have lived in and around San Francisco and have many American Jewish friends and acquaintances, I can offer some anecdotal data on the behavior of this group. These Jews represent a particular swath of American Jewry: secular, superficially religious, fiscally liberal, socially intolerant, and schooled to value education over knowledge.

This population can be subdivided into two categories: a minority that is willing to grant that Trump achieved major accomplishments for Jews and Israel, and a majority that is actively hostile toward Israel and places no value on those accomplishments.

While the first group is inclined to minimize the significance of Trump’s achievements on behalf of Jews and Israel, they agree that he put the “peace process” on a positive trajectory—but this is not enough to overcome their personal revulsion toward Trump as a person, so they would never vote for him.

The second and larger group displays a trend unprecedented among American Jews since the end of WWII. They might initially respond like the smaller group in terms of priorities, but when pressed, they offer a more truthful answer that is striking in its brutality and honesty. They admit that they don’t care for the entire subject. They couldn’t care less about what President Trump has done or not done for Israel or American Jews. Those issues are irrelevant to them—including the issue of antisemitism, which, as far as they are concerned, comes under the general rubric of anti-racism and equality. Their lack of interest would apply even if it were Joe Biden or even Barack Obama who had made Trump’s decisions on Israel’s behalf.

Significantly, this group also believes that anyone who benefited from Trump’s presidency is forever stained as an enemy of the people. In the view of this group, everything touched by President Trump bears the mark of Cain, rendering all subjects of his interest and affection irredeemable. This includes Israel. Prior benign indifference has morphed into active dislike and even hatred of the Jewish State among many American Jews.

This development has an echo in the more distant past. The German Jews who were the first to settle in the US in the 19th century wanted to separate themselves from the rest of Jewry, including traditionalists and especially Zionists. The huge influx of Eastern European Jews and the events of the first half of the 20th century put a temporary halt to that tendency, but it did not stop it completely.

Why did President Trump go to the trouble of achieving his results for Israel in the first place? He knows the American Jewish community well—after all, his daughter and son-in-law are religious Jews. He has to have known that he couldn’t expect any gratitude from the self-righteous, reality-denying secular Jewish majority. He has not benefited one iota from his efforts on Israel’s behalf, all of which were politically risky.

The only possible answer is that he did these things because he thought they were right regardless of the consequences for himself, which is the behavior of a true friend. Most American Jews refused to credit him for his accomplishments because they no longer care about either Israel or their religion. The American elites have taken note of this apathy. If Jews stop caring about themselves, nobody else will. 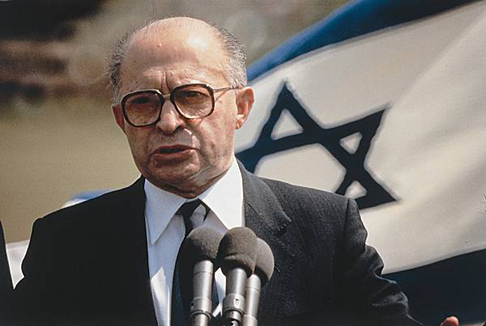 Menachem Begin: Lessons of the Holocaust