After a long career in government and Jewish communal service, Ronald S. Lauder just announced his new cause: creating a Palestinian state in Israel’s backyard. People sometimes take on some pretty strange hobbies in their golden years. Lauder’s is not merely strange, but genuinely dangerous to the safety of Israel.


“We must push for a two-state solution,” Lauder declared on Monday in “Israel’s Self-Inflicted Wounds” on the op-ed page of The New York Times.

Let’s consider, first of all, the venue Lauder chose for his announcement. He had many choices aside from the Times. For example, he could have quietly advocated his position within the confines of private diplomatic channels. Or he could have made his case to fellow leaders of Jewish organizations. He even could have—I know this seems outlandish—moved to Israel and cast his vote for a political party that advocates Palestinian statehood.

The only conceivable reason for Lauder to broadcast his plea in The New York Times is to put public pressure on Israel to surrender to his demand. Clearly, he does not respect the wishes of the Israeli public. Nor does he have any regard for the right of Israel’s democratically elected leaders to make decisions based on Israel’s best interests, free of foreign pressure.

This is not Lauder’s first foray into the surrender of Israeli-controlled territory. During Benjamin Netanyahu’s first term as Israeli prime minister in the 1990s, Lauder attempted to negotiate the return of the Golan Heights to Syria. Can anyone imagine what the Golan Heights would be like today with Iranian “volunteers” staring down at Israel if that plan had gone ahead?

Now to the substance of his demand: “the two-state solution.”

Those who advocate policy positions that have little or no merit always wrap them in soothing slogans. Instead of explaining what they are actually seeking—instead of acknowledging the real-life consequences of what they are advocating—they come up with a phrase that’s hard to disagree with and which demonizes their opponents.

The “two-state solution” claim is cut from the same cloth. “Two states” sounds fair. After all, why should only one side get a state? And who could be against a “solution”? Nobody wants to be considered a greedy “one-stater” or an anti-solution extremist.

If a Palestinian state is to be established, it will be situated in most or all of the Judea-Samaria territories. There is no other possibility. That means that at its mid-section, Israel will be all of nine miles wide.

Nine miles wide. It would take an Arab-tank column a matter of minutes to cut Israel in two.

Lauder attended the Bronx High School of Science. The Bronx, at its widest point, is about nine miles wide. Later, he studied at the University of Paris. Paris happens to be nine miles wide as well. Lauder once served as the American ambassador to Austria. Its capital, Vienna, is 18 miles wide. Get that? At its mid-section, Israel would be half as wide as Vienna.

Let’s consider some of the other real-life consequences of the Lauder solution. Major Israeli cities would suddenly become border cities—meaning that they would be within easy striking distance of terrorists from “Palestine.” Ra’anana would be just five miles from “Palestine.” Petach Tikvah, four miles; Kfar Saba, three miles.

Ben-Gurion Airport, Israel’s lifeline to the world, would be just a few miles from the border. A Palestinian terrorist with a shoulder-launched missile could target planes coming and going.

Now contrast Israeli-Palestinian geography with that of Israel and Egypt.

From 1967 to 1979, when Egypt was at war with Israel, the major strategic advantage that Israel enjoyed was its possession of the Sinai Peninsula. More than 23,000 square miles of desert stood between Israel and its most powerful enemy. This buffer zone meant that when Egypt attacked Israel in 1973, the war was fought in the desert—not in the streets of Beersheva and Ashkelon.

There would be no buffer between Israel and Ronald Lauder’s “Palestine.” In the event of a Palestinian attack, the war would be fought in the streets and neighborhoods of Israel. So the “solution” that Lauder proposes is completely based on one thing: all of the Palestinians suddenly becoming peaceful.

Is that a reasonable or realistic prospect? Fortunately, one need not speculate; there is a 25-year record to examine. Twenty-five years after the Palestinians pledged peace as part of the Oslo Accords, Israel still faces constant shootings and stabbings undertaken by Palestinians, nonstop incitement, fanatical glorification of terrorists, and rocket attack after rocket attack.

That’s what a “two-state solution” actually means. So just go ahead and say it, Mr. Lauder. Stop hiding behind clichés and slogans. Tell the Israeli public, the American public and the American Jewish community what the consequences of your “solution” will actually be, and then let them decide if it makes sense. 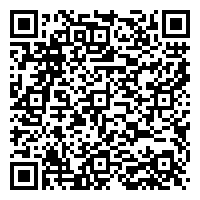