On Chanukah, we strengthen ourselves in the area of emunah. The Zohar (on Parshas Yisro) states that the Greeks attributed the existence of the world to nature without any Divine supervision. Thus, the Greeks sought to eradicate our emunah in Hashem. With the victory of the Chashmonaim over the Greek army, however, there emerged a clear recognition that a person doesn’t move his finger in this world until it is so decreed in the World of Truth.

In the context of the Bris Bein HaBesarim, the Torah tells us that “a dread, great darkness fell upon him [Avraham]” (Bereishis 15:12). The Medrash Rabbah cites an opinion that “darkness” refers to the Greek kingdom, which darkened the eyes of Klal Yisrael by trying to obscure the hand of Hashem in the world.


Megillas Esther (3:12) states: “written and sealed with the king’s signet ring.” The Hebrew word for ring, “taba’as,” has the same root as “teva” (nature), alluding to the reality that nothing in nature occurs by happenstance; rather, everything is supervised by hashgacha pratis, the divine providence, of the King of kings.

The Ramban tells us that at times we are privileged to experience open miracles in order to strengthen our faith in Hashem’s hashgacha of the world. Acclaimed miracles enable us to more easily recognize the hidden miracles of natural law.

The Talmud (Taanis 25a) relates that one Shabbos evening, R’ Chanina ben Dosa saw that his daughter was sad. When he questioned her, she said that she had mistakenly lit the Shabbos lamps with vinegar instead of oil, and she was concerned that they would soon go out.

R’ Chanina exclaimed, “What are you concerned about? He Who decreed that oil should burn can decree that the vinegar should burn.” And so it was. The lamps burned through the Shabbos and were still burning for Havdalah.

The Ben Yehoyada (also known as the Ben Ish Chai, 1832-1909) asks: As soon as the daughter of R’ Chanina saw the wicks burn steadily despite being immersed in vinegar, she knew an open miracle had occurred. Why, then, was she sad?

He answers that she knew she was seeing a miracle and, indeed, the household of R’ Chanina ben Dosa were accustomed to experiencing miracles. She feared, however, that they would have to sit in the dark over Shabbos since it’s forbidden for one to benefit from a miracle.

Her father explained, however, that their emunah in Hashem was so absolute that it made no difference to them how the lamps remained lit since without the command of Hashem a wick would never burn steadily – whether it was immersed in oil or vinegar. Both were equal miracles to R’ Chanina. One who attains such a level of emunah may undoubtedly enjoy the light that comes from a wick immersed in vinegar, as Chabakuk 2:4 says, “The righteous person shall live through his faith.”

It was an “off-Shabbos” in one of the yeshivos in Israel, which meant that the students could go home for Shabbos. Two of the young men from abroad who had no family in Israel decided to spend Shabbos in Tzfas where they would have an opportunity to visit some of its holy sites. They made the necessary arrangements and took an early bus out of Yerushalayim to ensure their timely arrival in Tzfas.

But Hashem had other plans. There were many delays along the way, and close to candle-lighting time they were still in Teveriah. The young men realized that they would have to find accommodations somewhere in the city. They approached one of the houses, and, when they knocked on the door, they were immediately invited in.

“I have everything you need,” said the host graciously, “and it would be my honor to have you stay with me for Shabbos.” The man was very congenial and hospitable, and the boys thanked him from the bottom of their hearts for his invitation. The guests couldn’t help notice that many of the bedrooms in the house had children’s toys in them. “Where are the children?” they asked.

Their host laughed and responded, “Indeed, if you would have come any other Shabbos, I would not have had any beds for you because they are all for my children.” He then explained that two weeks earlier he had to travel out of the country and made arrangements for his children to stay with a different family in another city. Due to circumstances beyond his control, he had to stay away longer and he didn’t have time to pick up his family when he got back because his flight was delayed.

The boys immediately recognized the auspicious turn of events that Hashem had orchestrated. But the story doesn’t end there. Two weeks later, a shidduch was suggested to one of the young men with the daughter of their host. The man had observed the exemplary middos of the young man and realized he would be a perfect match for his daughter.

It was at that point that they grasped the true extent of Divine Providence in this world – “By Hashem are man’s footsteps established” (Tehillim 37:23). 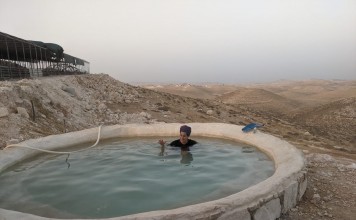