Prime Minister Naftali Bennett has personally asked Labor MK Gilad Kariv not to attend the egalitarian services being held Friday at the Kotel, Western Wall Plaza in Jerusalem organized by the Women of the Wall for fear that there could be a violent confrontation.

The Israel police have already announced plans to bring in additional officers to maintain the peace at the Plaza.


Director General of the Western Wall Heritage Foundation Mordechai Eliav, sent a letter to the Jerusalem district police chief saying, “The foundation does not take responsibility for maintaining public order in the plaza tomorrow.” Then group, he said, is simply not capable of mediating between the sides.

A police representative told Kan 11 news “We will not allow disturbances at the Western Wall – we call on the parties to reach an understanding.”

Gilad Kariv is not only an MK, he is also a Reform rabbi. Kariv has, in the past, used his parliamentary immunity as an MK to break the laws applying to the area at the Wall by bringing a Torah scroll for the women to use.

Kariv has said that he will decide on whether or not to honor Bennett’s request once all of the remaining budget matters are approved by the Knesset. 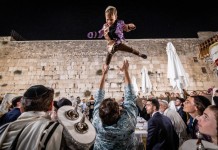