Jason Greenblatt, President Donald Trump’s special envoy to the Middle East, on Wednesday announced a water agreement between Israel and the PA, as part of the Red Sea-Dead Sea pipeline project Israel is planning with Jordan, AP reported.

Sometimes called the Two Seas Canal, The Red Sea–Dead Sea Conveyance will run from the Jordanian coastal city of Aqaba by the Red Sea to the Lisan area in the Dead Sea. It has already been designed to provide drinking water to Jordan, Israel and the PA, as well as provide sea water to raise the Dead Sea’s receding water level, and generate hydroelectricity to support the energy needs of the project itself.


In what appears to be a new low in fake news, Greenblatt told a press conference in Jerusalem that the “US-mediated deal” will give the “parched Palestinian territories” a whopping 32 million cubic meters of water per year, which Israel would provide at a reduced rate, the AP reported.

But the fact is that well before Donald Trump even descended the Trump Tower escalator to announce his run for the presidency, Israel was already working on those plans, thank you very much.

JewishPress.com reported back in November 2015 about the historic Red Sea–Dead Sea canal project which “began with a memorandum of understanding signed in Washington by Israeli, Jordanian and Palestinian Authority leaders on Dec. 9, 2013.”

And on December 4, 2016, we reported that Netanyahu told his ministers about new progress in the Israel-Jordan-PA Red Sea–Dead Sea Canal: “Last week we crossed another stage en route to realizing the canal between the seas project,” he said. “The US, the EU and Japan are financing this joint Israel-Jordan-Palestinian Authority project, and it includes desalination for communities in the Israeli and Jordanian Aravah desert alike, and channeling salt water to the Dead Sea. According to the plan, in 2020 fresh water will be supplied to the residents of the Aravah and salt water will finally be channeled to the Dead Sea.”

So what was Greenblatt’s great achievement?

Apparently it was to convince the PA to stop cutting off their own nose to spite their face and agree to accept the inexpensive water being offered them, which they have been refusing to do, as it ruined their anti-Israel water narrative. 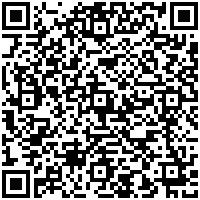