Shortly after National Security Minister Itamar Ben Gvir descended from Temple Mount on Tuesday morning, he received a letter from the Returning to the Mountain movement, asking him to approve conducting the paschal sacrifice on Wednesday afternoon, April 5, 2023, at the same holy site, the way Jews did until 1,953 years ago when the Romans destroyed our second holy Temple.

Pay attention, NYT Jerusalem reporter Isabel Kershner who this morning called Ben Gvir “ultranationalist” – some of us down here are mega-ultranationalists, and some of our friends are so super-mega-nationalists, they call us leftists…

But I digress. Refael Morris of Returning to the Mountain, which says it is a movement dedicated to redeeming the Temple Mount, wrote Minister Ben Gvir:

“You are well aware from your past activities of the importance of the Passover sacrifice, nevertheless, it should be noted that it is a positive commandment which the failure to perform it carries the penalty of Karet––meted to only one other transgression, failing to perform one’s infant’s circumcision, for which generations of Jews have risked their lives.

“This year, in light of the political situation and the establishment of a ‘full-right’ government for the first time, a real possibility exists to conduct the Passover Sacrifice on the Temple Mount with a large audience and in a dignified manner, approved by and coordinated with all the various elements – chief among them the Israel Police, which is under your authority as the state of Israel’s new Minister of National Security.

“We, therefore, inform you that this Wednesday, Jan. 4, 2023, we intend to submit a request to the Israel Police to hold the event and to ask that you use all the authority afforded to you by your new position to approve our request at the earliest time possible so that we can prepare on every level at the earliest possible time (logistic, halachic, bureaucratic, and so on).

“We have now a golden opportunity to return our old glory and renew the Passover Sacrifice for the first time in some 2,000 years, a move that will surely hasten our redemption and be written in the pages of history as the start of the construction of our Third Temple.”

I’d like to include an abbreviated translation of Rabbi Shmuel Eliyahu’s trailblazing article, “Is it possible to offer a Passover sacrifice today?” where he debates the halachic, legal, and public aspects of renewing the Passover Sacrifice:

“It is halachically possible. Every year Jews make strenuous preparations for Passover with the Seder night at its center. But in truth, we must remember that we are missing the center of the Seder night which is the Passover sacrifice, the namesake of the holiday. Most people think that it’s impractical from a halachic point of view to offer a Passover sacrifice today. But you have to remember what many of the poskim who dealt with this issue have ruled.

“Rabbi Akiva Iger wrote in a letter to his son-in-law, the Chatham Sofer, that he proposes to ask the rulers of Jerusalem to give their permission to sacrifice. The Chatham Sofer replies that the problem lies in the governor who is very strict and won’t allow anyone not of their faith to come near.

“Rabbi Zvi Hirsch Kalisher, one of the greatest students of Rabbi Akiva Iger, dealt extensively with the matter in his book Drishat Zion, and even addressed a letter to Sir Moses Montefiore and Rothschild, asking them to approach the Turkish Sultan about allocating a place on the Temple Mount for the construction of an altar and the renewal of the Passover sacrifice.

“Rabbi Tikochinsky, in his book series ‘The Holy City and the Temple,’ also discusses the problems and solutions regarding offering sacrifices in our time.

“Maharitz Hayut wrote: ‘In any case, I went over all the arguments, and found nothing that prevents us from offering a Passover sacrifice today, after an altar is built, on the spot where it was built in the first place.

“According to the Hazon Ish, the only problem is the lack of approval from the government, therefore, in our time, if there’s permission to offer a Passover sacrifice – it must not be canceled.”

Rabbi Eliyahu also suggests that “according to the laws of the State of Israel, it is not possible to stop a person who wants to offer a Passover sacrifice. There are laws in the country regarding the freedom of each person to observe the mitzvot of his religion as he understands them. A number of petitions were submitted to the High Court on this issue, and the judges clarified that it is included in the freedom of worship that is fundamental in Israeli law. But the judges use the decision of the government or the police, which claims they cannot protect those who will offer the sacrifice.

“But it is absolutely clear that if the public puts pressure on its representatives in the government or the Knesset – everything will change. If the judges ruled that the police must protect lesser demonstrations – why not the Passover sacrifice? Is it not important enough?”

Rabbi Eliyahu reminds us that “when the Israelites were told to offer their first Passover sacrifice in Egypt, they feared that the world would react harshly to it. ‘How can we sacrifice the abomination of Egypt before their eyes, will they not stone us?’ (The Egyptians were vegetarians and eating animals was repugnant to them – DI). In the end, they sacrificed the abomination of Egypt before the Egyptians’ eyes and no one was stoned.”

In that context, this is what a certain former prime minister whose name I shall not mention warned only yesterday about Minister Ben Gvir’s ascent to the Temple Mount today that PM Netanyahu must muster whatever power he has left and order Ben Gvir not to go up to the Mountain, because, and I quote, “People will die.” 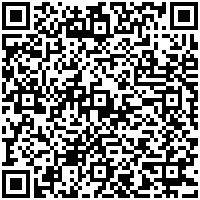