At 4 in the morning Monday, MK Bezalel Smotrich was attempting to support his reservations regarding a proposed bill and cited as support to his position a ruling by former Supreme Court President Aharon Barak who set limits on rightwing demonstrations against then Prime Minister Yitzhak Rabin.

In mid-speech, Smotrich presumably became aware of the irony involved in his citing the historic destroyer of the equality of the three branches of government and the staunch enemy of rightwing political power, and broke into two minutes of irrepressible laughter.

Which led Committee Chairman Yitzhak Pindros (United Torah Judaism) to quote from tractate Megillah 25b: ” Rav Nachman said: All hilarity is forbidden except for hilarity at the expense of idol worship, which is permitted.”

Obviously, the learned chairman only added to the hilarity by equating former president Barak to an idol (hey, they guy has been worshiped by leftist worshipers since the early 1990s). 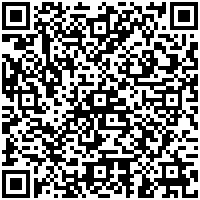