On one level we all have the same glorious inheritance. The Torah in its largest sense, along with the voluminous Oral Tradition in the Talmud, its commentaries and elaborations, make the Jewish artist the richest creative person imaginable.  However, there are crucial distinctions in how we use this inheritance.  British philosopher Isaiah Berlin (1909-1997) famously distinguishes between creative thinkers who are like either a “hedgehog” and those who are “foxes.”  Ah, there’s the rub!

Berlin posited that some thinkers are like the hedgehog (who seems to be solely expert at self defense), knowing one big idea that subsumes all their creative work; while others are like the fox (cunning and drawing on a multitude of strategies and concepts,) constantly seeing new and different visions.  Archie Rand is a fox of epic proportions, as evidenced in his latest exhibition: “Three Major Works.”

In this show Rand offers us three distinct ways of making biblical art. He presents “The Chapter Paintings” (1989), “60 Paintings From the Bible” (1992) and “Psalm 68” (1994) as divergent paradigms of Jewish art methodology. The approximately one hundred and twelve paintings shown here are testimony to the breadth of his vision of Jewish art.

Over the last ten years I have reviewed Rand in this column many times: “The Painted Shul: B’nai Yosef Murals” (April 2002); “Rand’s Prayer: 19 Diaspora Paintings (December 2005)”; “The Image Before the Text: The 613” (April 2008) and “Had Gadya” (April 2011). While his more recent work has frequently taken a deeply personal and idiosyncratic turn, these earlier works over a scant five-year span provide very important markers in the development of contemporary Jewish art.

“The Chapter Paintings” (1989) were a groundbreaking series of 54 paintings, each dedicated to the weekly parsha. Curator Bat-Sheva Slavin comments that their creation “instigated curator Norman Kleeblatt’s landmark 1996 ‘Too Jewish’ ” exhibition at the Jewish Museum.  In this series Rand bravely selects one significant image or theme to characterize each parsha with “what he calls ‘the visual key.’ ”  This approach ranges from the simple meaning (Rand’s “pashat”); for example Chayei Sarah represented by the gaping mouth of a cave; to the considerably more complex, frequently based on midrashic sources.  The painting of Ekev, a brightly shinning red ruby, is based on the verse, “…if you obey these rules and observe them faithfully, the Lord your God…will love you and bless you…(Devarim 7:12-13).  We can only understand his image in light of the midrash in Devorim Rabba that relates: “R. Shimon ben Shetach once bought a donkey from an Arab.  His students found a jewel in the animal’s neckband. They said, ‘God has granted you riches!’  But Shimon ben Shetach replied, ‘I paid for a donkey, not a for a jewel.’ He sought out the Arab and returned the jewel to him. Overjoyed, the Arab exclaimed, ‘Blessed be Shimon ben Shetach’s God.’”  So, where is Rand going with this?  It seems that the blessing and love God will give us for observing his commandments will come in the form of peace and blessing from the non-Jews.  Thus Rand’s visual midrash casts the verse in a radically different light indeed.

Thousands Flocking to Hebron for Shabbat 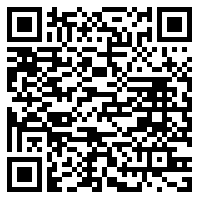