The first use of the Magen David Adom – the red star of David – as a symbol of medical assistance came during the Anglo-Boer War in South Africa (1899-1902), when it was used by the Ambulance Corps founded by Ben Zion Aaron in Johannesburg as a first-aid corps to assist the Boer forces.

South African President Paul Kruger, who provided initial funding for the enterprise, granted permission to the corps to use the Magen David as its emblem instead of the standard red cross. Kruger (1825-1904), who served as president of the South African Republic (or Transvaal) from 1883 to 1900, came to international prominence as the leader of the Boers against Britain during the Second Boer War.


The embodiment of Afrikanerdom, Kruger remains a controversial and divisive figure, revered by many as a folk hero and despised by others as the defender of an unjust cause. While the Boers’ treatment of Jews, who served on both sides of the Boer War, was mixed, Kruger was a great friend of the Jews and regarded them as “G-d’s chosen people.”

Even given his philo-Semitism, Kruger’s dispensation permitting the use of the Magen David was particularly noteworthy considering that even after Israel MDA was admitted as a member of the International Red Cross (IRC) on June 22, 2006 after a battle spanning almost a century, the IRC continues to refuse to recognize the Magen David as a legitimate symbol even though it officially recognized the Muslim “Red Crescent” symbol in 1929 – ironically the very year of the great Arab riots and pogroms in Eretz Yisrael.

MDA in Israel was arguably born twice: first after World War I and then again in 1930. Some accounts attribute its origins to 1915, when Dr. Moses Erlanger, a Swiss-Jewish ophthalmologist, launched a society, which he called “Magen David Adom,” to provide medical services for Jews captured and wounded during World War I. Some society members had served in British military hospitals, and the British military government recognized the Magen David symbol as the society’s official emblem.

The idea of founding MDA in Eretz Yisrael began at a meeting in Philadelphia in October 1918, when Ben-Gurion, Golda Meir, and Henrietta Szold discussed the unavailability of sufficient medical help to support the soldiers of the Jewish Legion, who were then fighting with British troops in Eretz Yisrael to liberate the land from the Ottoman Turks. They organized a makeshift medical support organization to assist both the Legion and the settlers of the Yishuv, but the group disbanded a few years after World War I.

The actual birth of MDA is most frequently credited to nurse Karen Tenenbaum, a “Jewish Florence Nightingale” of sorts. Eretz Yisrael, which was by then under British Mandate rule, had neither first aid nor ambulance services, which became particularly problematic after the murderous Arab riots of 1929. It became sadly obvious that lives were being lost due to the lack of even the most fundamental medical services, and Tenenbaum decided to take action to address this deficiency.

On June 7, 1930, she assembled a group of seven Jewish doctors – Meshulam Levontin, Chaim Halperin, M. Rabinowitz, M. Frankel, Dr. Eliyahu, Dr. Barzel, and C. Leibowitz – at a café on the Tel Aviv waterfront. They decided to establish a quick response volunteer emergency medical association to be called “Magen David Adom, Tel Aviv,” and they commenced operation from a single branch out of a decrepit shack at the intersection of Rothschild and Nachalat Benyamin Streets in Tel Aviv.

He was appointed the official doctor for the Jews of Hebron and Tiberias before being expelled from Eretz Yisrael by the Ottoman Turks. He went on to serve as commander of the medical unit of the Zion Mule Corps during World War I, working closely with Ze’ev Jabotinsky and Joseph Trumpeldor.

Upon his return after the war, he served as director of Hadassah Hospital in Tel Aviv until 1933, after which he served as head of the hospital’s epidemiology department and founded the first blood transfusion service in Eretz Yisrael (1936). During Israel’s War of Independence, he was a founder of Israel’s Medical Service.

Levontin’s original proposal to Tel Aviv city leaders – that they finance the purchase of two sets of bicycles supporting a bed to transfer the injured in case of disaster – was rejected. Meanwhile, Chaim Halperin returned from Egypt determined to purchase a modern ambulance he had seen there. Fundraising activities ultimately proved successful when, on June 24, 1931 the first MDA ambulance traveled from Levontin’s home to the home of Meir Dizengoff, then mayor of Tel Aviv.

Newspaper ads placed by MDA yielded 100 volunteers, who were initially trained by Levontin, and the first graduation ceremony was held in September 1930 with 73 paramedics having successfully completed the first aid course. Additional MDA branches were opened in Haifa (1933) and Jerusalem (1934), and MDA’s cornerstone for its new Tel Aviv headquarters was laid in January 1936.

Statistics show that during its first years, MDA provided first aid to 11,000 people, a remarkable success story given its limited resources.

A national MDA organization was established in 1935 to provide medical services to the public and the Haganah, and the society expanded during the following years, particularly after a second wave of Arab rioting from April 1936 until early 1939. By 1937, MDA covered all of Eretz Yisrael – serving anyone in need, including Christians and Muslims – and it boasted a fleet of hundreds of ambulances. 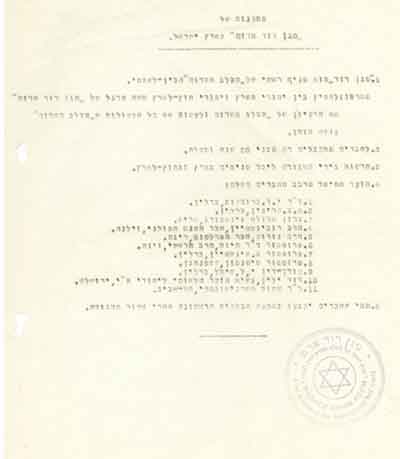 Exhibited here is an original document with “Regulations of ‘Magen David Adom’ in Eretz Yisrael”:

The well-known names on this list are Einstein, Yellen, and Tchernichovsky, but I could find no link between any of them and Magen David Adom (other than this document), nor any mention at all of Krinin (#2), Baron Ginzburg (#3), and Advocate Tittle (#9). Available information about many of the others is sketchy and, in any case, space limitations are such that I can only briefly discuss these MDA founding committee members.

1) Julius Davidovich Brutzkus (1870-1951) was a Lithuanian Jewish historian, scholar, politician, and a passionate Zionist who encouraged Jews to engage in political action and self-defense. He wrote many articles and books in at least eight languages on the history of the Jews in Russia and the cultural history of Mizrahi Jewry; served as Minister for Jewish Affairs in the Lithuanian government; and was elected to the Lithuanian Parliament (1923).

4) As rav of Vilna for 30 years, Rav Yitzchak Rubinstein (1880-1945) successfully prevailed upon the Czarist government not to exile the Jewish populations of Vilna and Warsaw. After World War I, he headed the aid society for war victims – one could reasonably surmise that it was this service that brought him to MDA’s attention – and he served as the Lithuanian Minister of Jewish affairs and was elected to the Polish Sejm and Senate.

His election as chief rabbi of Vilna sparked a violent controversy with the followers of the Gaon Rav Chaim Ozer Grodzinsky who could not come to terms with their leader’s election loss. Upon his arrival in America (1940), R. Rubinstein was asked by Yeshiva University to head its RIETS program.

5) Rav Nurok (1884-1962) was a religious Zionist and Israeli politician. After receiving his Ph.D., he became deputy chairman of the Jewish community in Moscow before settling in Riga, where he was elected to the Latvian Sejm on a religious Zionist ticket (1921). He was a founder of the World Jewish Congress (1936) and served as a delegate on behalf of Mizrachi to most of the Zionist Congresses before World War II.

After his wife and two sons were murdered in the Holocaust, he settled in Eretz Yisrael (1947), where he served in the first five Knessets; was appointed Minister of Posts; and lost an Israeli presidential election to Yitzchak Ben-Zvi (1952).

6) Zvi Perez Chajes – sometimes spelled Tzvi-Peretz Chayot – (1876-1927) was a rabbi, historian, biblical scholar, and a notable Zionist leader. After serving first as rav of Florence and then as a rabbi in Trieste, he served as the chief rabbi of the Jewish community of Vienna (1918) until his death.

He served as chairman of the Zionist General Council (1921-25), as a trustee of the Hebrew University, and as a member of the World Relief Conference, through which he may have become associated with MDA.

8) Professor David Simonsen (1853-1932) was a respected international scholar, rabbi, and bibliophile – his private 25,000-volume Jewish library was acquired by The Royal Library after he passed away – who was a central figure in Jewish Copenhagen for over six decades and served as chief rabbi of Copenhagen from 1892-1902. He was also a philanthropist who supported Jewish institutions throughout the world, including several post-World War I relief organizations, which may have brought him to MDA’s attention.

10) Yellen (1864-1941), a distinguished teacher, writer, poet, translator, linguist, Hebraist, and grammarian, was a symbol of the integration of the Ashkenazi and Sephardi communities in Eretz Yisrael, a frequent theme of his scholarship. One of the leaders of the Yishuv, he was among the first public figures in Eretz Yisrael to openly join the Zionist movement and to openly participate in Zionist Congresses.

11) Tchernichovsky (1875-1943) is best known as one of the great Hebrew poets, particularly for his incomparable sonnets and as a two-time recipient of the prestigious Bialik Prize for Literature. However, he was also a physician who, after practicing medicine in Russia, settled in Eretz Yisrael (1931), where he served as chief physician of the Tel Aviv municipal school system. He also edited the section on medicine in the Hebrew encyclopedia and was a member of the Committee of the Hebrew Language.

Our document is undated, though it had to have pre-dated 1927, the year of R. Chayot’s/Chajes’ death. Unable to determine what it actually represents, I wrote to Magen David Adom, which forwarded a scan of a short article that appeared in the August 14, 1925 edition of Haaretz. According to that article, the IRC in Geneva received a letter from the National Committee of the Jews of Eretz Yisrael in Jerusalem forwarding a proposal the committee had received during its June 25, 1925 meeting regarding the formation of “Magen David Adom” to be a branch of the IRC and listing our 11 members as the founding committee. Nonetheless, I find it both interesting and somewhat strange that no MDA “timeline” or other materials that I have seen discuss this important development in the early history of MDA.

The Israeli Postal Authority regards 1930 as the year of MDA’s founding, as may be seen from the two stamps exhibited here. The first is a 1955 stamp it issued in honor of MDA’s 25th anniversary, and the second is a 1980 sheetlet commemorating MDA’s 50th, or jubilee, anniversary. Both stamps cite the beautiful line from the Talmud (Sanhedrin 37a): “Whoever saves one life is considered by Scripture to have saved an entire world.”

The original form of the “whoever saves a life” teaching exists in two different versions, the best known one being, “Whoever saves a single life in Israel is considered by Scripture to have saved an entire world” (emphasis added). In several versions, though – including Rashi’s and Maimonides’ – the words “in Israel” are omitted. Although the debate regarding the wording involves a very important question – does the principle apply to saving any life or only a Jewish life? – the MDA universalist version is entirely appropriate given its treatment of every person in need.

Interestingly, the American-Israel Numismatic Association apparently considers 1919 as the year of MDA’s founding. Last year, it marked the MDA centennial by issuing an MDA commemoration medal to each of its paid members.