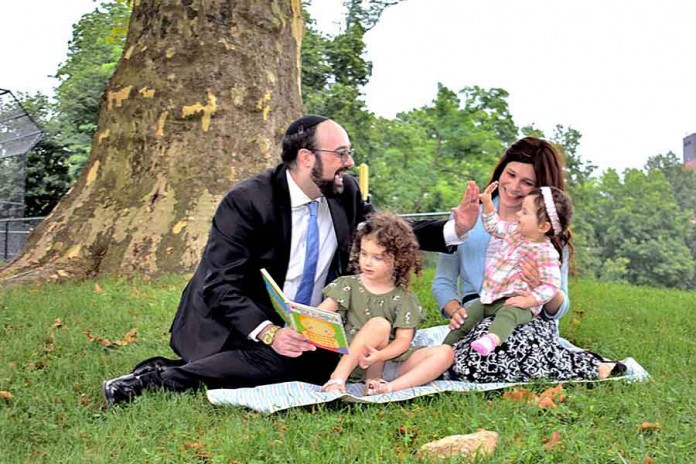 The Jewish Life Photo Bank, a project of Chochmat Nashim, isn’t just about photos: it’s about preventing women from being erased from Jewish communities.

The goal of the photo bank, which features over 700 stock photos of Jewish women and families doing everyday activities such as praying, working, playing piano, cooking, and walking, is to re-normalize utilizing womens headshots and photos in Orthodox publications and advertisements. Additionally, it aims to provide stock photos for Jewish businesses, media outlets, websites and educational pamphlets that would utilize professional, dignified photos of Jewish women where previously there were few to none available. Recently, The Times of Israel and the Jewish Chronicle in the UK have signed up to utilize the pictures from the photo bank.

“We aren’t taking glamorous, ‘model’ shots of women. The point of the photos is to have realistic and natural photos of Jewish women in daily life,” said Shoshanna Keats-Jaskoll of Beit Shemesh, Israel, founder of Chochmat Nashim, an organization based in Israel that advocates and educates about women’s issues.

“Working women took time off during the work day to come to my house, and even drove hours to participate in this …. Many women have identified this issue, but if you’re not an editor, a writer or an activist, there’s so little you feel you can do to change it. This provided an amazing opportunity for women to get involved and create change.”

Ukraincik was connected with Keats-Jaskoll through Facebook groups that discussed the topic of women’s erasure through pictures. When Keats-Jaskoll started posting about the initiative, Ukraincik asked to be signed up. “I don’t like being in front of the camera. But this is really important to me.” Photoshoots are still continuing across Israel and the U.S.

The idea was brought up initially in a Facebook group of working Jewish women that Keats-Jaskoll was a part of in 2019. Women who were business owners had been saying in the group that they needed pictures of frum women to illustrate articles, advertisements and the like, but none were available. Knowing she had written on and was involved in this topic, “people reached out to me and said: this would be a great project for you to do. But I didn’t have the funds or the time, and I got involved in other projects,” Keats-Jaskoll said. During Covid, Keats-Jaskoll was reviewing a list of projects they weren’t able to get to, and this was one of them.

The photo bank (jewishlifephotos.com), released on October 28, aims to combat what Keats-Jaskoll identified as a rising extremism when it comes to erasing women’s images in frum communities. Back in 2013, Keats-Jaskoll began noticing that there were almost no images of women in her town of Beit Shemesh, in advertisements, health clinics, and even educational pamphlets, though it hadn’t been so before. Although this may have been a longer-standing practice in charedi communities, it slowly started becoming the norm elsewhere.

“It’s to the point that women’s faces are regularly vandalized on public billboards, and advertisers have refused to put women on them to avoid the damage. Even health clinics have stopped showing women and girls in some cities to cater to the ‘lowest denominator,’” she said. “If you color over a woman’s face in her business advertisement, and only men have photos for their professional advertising, that’s going to have financial repercussions on women’s businesses; if you have a smiling male real estate agent, next to a woman’s name where it says ‘no image available,’ who are you going to choose?”

Keats-Jaskoll said her goal was never to change another community’s norms, but rather to preserve the norm that had always existed in her community and many others: modest visual representation of women. When she started writing more about the topic in Times of Israel and through Facebook, she found more people were reaching out, saying, “This is happening in my community too; they just put out a new shul directory but it only has the husband’s images, even though it’s a Modern Orthodox shul.” Currently, there are frum publications, even specifically for women, that do not feature any photos of women – not even cartoon images or female dolls.

Ukraincik said she had noticed this trend developing over the past five years. But it hit home for her when a certain institution was honoring a friend of hers and her husband, and only put a picture of her husband. Ukraincik, already a writer for various Jewish publications, started to write about it. “What made me start is that I watched someone I greatly respect, disappear” she said.

Keats-Jaskoll began noticing other realities that she felt were stemming from this erasure problem. She relates that at the time she started writing, her aunt became an agunah. “I went to beit din with her and saw how she had no voice there…. There was a general apathy to the fact that this was a real person, a woman that has real needs and is struggling, and the man’s perspective was just continuously more valued and preferred over hers.” Keats-Jaskoll felt the two problems, and others, were interconnected: “Men don’t experience Judiasm the way women do. And when you have no frum representation of Jewish women, you don’t see them as part of the community, you start treating them as ‘other.’”

Keats-Jaskoll recalls receiving a call from a charedi woman who heard about the project, and whose friend had just died of breast cancer that she didn’t even know she had. In this woman’s community, there are no pictures of women in schools or health clinics, and medical terminology referring to a woman’s body even in health clinics, such as cervical or breast cancer, is rarely used in order to cater to the population majority. The woman discussed seeing a direct connection between her friend’s death and this reality.

“The woman wanted her community to start talking about womens’ health to prevent similar situations,” said Keats-Jaskoll, “but noted that if you can’t show a headshot of a women because it’s inherently immodest, and then naturally you don’t use the medical terms regarding a woman’s body such as cervix and uterus, because you start to think those words are inherently immodest as well. The reality is when women are not seen, their voices are not heard, and their needs are not met.”

Keats-Jaskoll sees the erasure of women’s photos from Orthodox life as a modern phenomenon, only about 20 years old, although it’s being marketed as a long-standing practice. One video made by Adina Miles-Sash (popularly known as Flatbush Girl) shows publications and advertisements from the 80s featuring tzniusly-dressed women in areas of Brooklyn, such as Williamsburg and Boro Park, where now there are none to be found.

Keats-Jaskoll also referenced a video in which Rabbi Shmuel Chaim Pappenheim, the previous editor of Ha’eidah magazine, provides pictures from The Yiddishe Licht, one of the oldest weekly papers of the ultra-Orthodox Jewish community in Israel, and Kol Yisrael, another well-known ultra-Orthodox newspaper in Israel, featuring pictures of rebbetzins, women in shiurim, and girls playing in the street to demonstrate that erasing women’s pictures is a modern phenomenon.

Pappenheim then relates that when he was the editor of Ha’eidah, a few months after creating an engagement-announcement section in the newspaper, he was told to stop including women’s names in the announcements as it is not tznius. Later on, this became common practice. When asked if there was a connection between erasing women’s pictures and later stopping to use their names, Rabbi Pappenheim answered that 70 years ago, even in the most ultra-Orthodox newspapers, these things existed. “And now it can’t be?” he asked.

“In response to the secular world’s promiscuity and extreme sexualization of women, people are just answering one extreme with another extreme that equally sexualizes women: erasing all images and references to them,” Keats-Jaskoll said.

The Jewish Photo Bank initiative seeks to fill that median gap, and provide realistic, natural and dignified pictures of Jewish women in daily life. “Your sons have pictures of Rav Pam and Rav Shach on the wall, great people they can visualize as role models.… What do we have for our daughters when no one would print a picture of a rebbetzin? Just the Kardashians on a front-page magazine in CVS,” said Ukraincik.

Ukraincik emphasizes that Jewish women’s photo representation is not just a women’s issue, but affects the community at large. “When I see amazing women accomplish so much in their communities, and their husbands’ photos appear instead, this creates a feeling that women are not really part of the community. I am the mother of boys, and I don’t want them to grow up thinking that a Jewish community is just made up of rebbeim, men and boys.”

Keats-Jaskoll sees picture banning as a slippery slope to other areas of women’s life being banned and deemed immodest. She recalls, as examples, her daughters being told to sit in the back of a bus in Israel because they are girls, and a wedding hall losing kashrut certification because a bride played the drums at her own wedding.

“For anyone who supports this policy, I want to ask: When is it enough? What direction are we going in? At what point does no representation, no images, achieve what you want it to do?” she said. “When a world of sheker has already been created by erasing women from Shabbos tables, health clinics, and women’s clothes advertisements, where are we going?”