On October 12, 2000, two IDF reservists were lynched; brutally beaten and mutilated by a Palestinian Arab mob in Ramallah, Samaria. Yosef Avrahami, aged 38, was the father of three; Vadim Novesche, the other victim, was a 33 year-old newly-wed.


The 2 soldiers accidentally entered Palestinian Authority-controlled Ramallah, and were captured by PA police forces. The PA police took them to a police station where the soldiers were brutally beaten. The PA police then handed over the soldiers to a mob, while the Police watched the scene. One of the Israelis was thrown out the window into the midst of the bloodthirsty mob who continued to beat and dismember the body, all the while cheering.

A “proud” Arab-Muslim “hero”, Aziz Salha, his hands covered in the blood of the Israelis, waves in a bragging manner through the window to the larger crowd anxiously waiting in the public square.

During the lynch, one of the Arab murderers paused in his savage beating to answer a cell phone belonging to one of the dying soldiers. He told the worried voice on the other end of the line, “We are killing your husband.”

Not much has changed in 15 years. May the memories of Yosef Avrahami, and Vadim Novesche be a blessing. 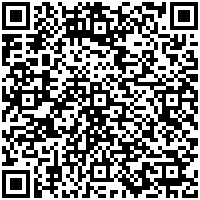