My mother, the eldest daughter of Reb Yaakov Kamenetsky, zt”l, was niftar last month at the age of 92. She took her last breath in her home in Efrat, Israel, next door to the shul that was my father’s for 24 years before his passing in 2007.

My mother died as gently as she lived, while holding the book of Samuel in her hands and preparing for a weekly women’s shiur. I was asleep at the Avenue Plaza Hotel in Boro Park, Brooklyn, when my mommy left us, and was awakened to listen to the funeral proceedings taking place on the Mount of Olives just before Shabbos in Israel, on the 2nd of Iyar.


In her memory I would like to share the deepest understanding of the most glorious and majestic garment on earth – the tallis, our prayer shawl, and its connection to one’s life in this world.

Many years ago, in the hallway of Yeshiva Sh’or Yoshuv, the rosh hayeshiva, Rav Shlomo Freifeld, zt”l, walked over to me and, grasping my hand, said, “Shurin, c’mon, let’s learn some Gemara together!”

“Fine, what should we learn?” I asked.

He pulled out a Talmud Bavli Mesechta Berochos from a bookcase and randomly opened it. “Let’s learn this blatt; this page, its Torah, it’s the shining light of Hashem!”

The Gemara taught that when King David acquired an understanding of the five periods in one’s lifetime, he composed five songs – or chapters in Tehillim.

When King David understood death, the Gemara taught, he wrote Psalm 104, where the first verse tells us: Hashem, my God, You are very great. “Hod v’hadar lavashta” – glory and majesty are Your garments.

I was baffled and asked, “This is the pasuk we recite when we wrap our prayer shawls around our head before resting the tallis on our shoulders; what does this have to do with death?”

Rav Freifeld answered, “A person’s lifetime is a tallis being woven. Every breath, every decision, every deed a person does is another stitch being woven into his tallis. With death, the garment is completed. Then our Creator, so to speak, wears this garment, this tallis, which has just had its final stitch.”

A short time after learning this with Rav Freifeld, a young acquaintance from Brooklyn College, barely nineteen, died a tragic death. This woman had done something interesting: When a poet, a non-Jewish colleague of ours, was thinking of becoming Jewish, she bought him a large beautiful tallis.

After her funeral it became clear that the poet would not be converting, so I asked him if he would give me the tallis. I told him the girl’s Hebrew name was Bracha, which means blessing, and that I wanted to make a blessing on her tallis each morning, which would be a source of happiness for her in the upper world.

I received the tallis and for years I wore it, making many berochos in memory of this young girl named Bracha.

After it had gone through much wear and tear, my holy mother, of blessed memory, noticed its condition and said, “Dov, it’s time you bought a new tallis! The one you’re wearing is old and ripped.”

I didn’t answer, but soon afterward my mother surprised me with a brand new tallis. I kissed her and said, “Mamale, although the tallis I’ve used is very special to me, I accept yours and feel I must wear it for kibbud em, honoring one’s mother.”

When I returned home, Bracha’s tallis was gone. I looked everywhere but it was as if it had disappeared into thin air.

I wore my mother’s tallis for years, and it never seemed older than the day I received it. It always looked neat and sweet – like every chatchke in my mother’s Efrat cottage.

I spent time in my hotel room after her petirah reminiscing about my mother’s last days. She was so holy. I remembered how I had spent her last Pesach seder with her as she sang every word of the Haggadah. I told her to lift her cup for vi’he she’amda and for Hallel. Not one drop of wine left her cup even though she raised it on an angle. The wine simply refused to spill. 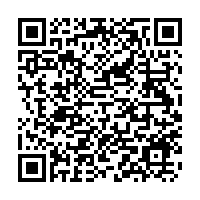