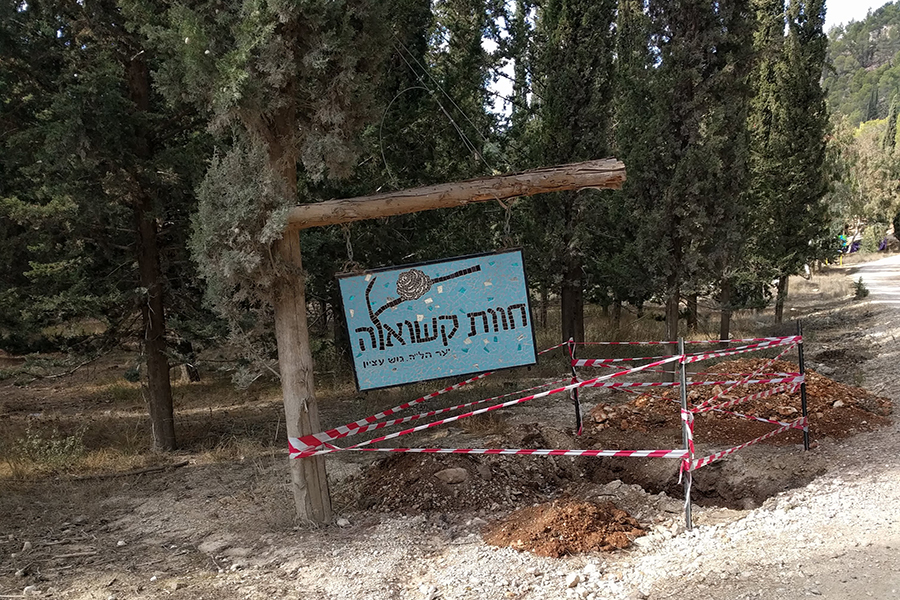 The pungent smell of fire has forced Techiya Ben David and her family to flee their home in the Lamed Hei Forest many times. Her husband Yair stays behind in order to guard their farm. Last summer there were approximately thirty fires in the forest, all set by local Arabs who try to compel the family to abandon their home and Zionistic enterprise. But the Ben David family will never abandon their home.

The Lamed Hei Forest is named for the 35 Palmach fighters who traveled by foot in January 1948 to resupply the four blockaded kibbutzim of Gush Etzion after earlier motorized convoys had been attacked. The group was originally made up of 38 fighters, but one sprained an ankle and two others carried him back to Jerusalem. The remaining 35 were spotted before they could reach their target and brutally killed in a prolonged battle.


In 1969, Keren Kayemet LeYisrael and members of Kibbutz Kfar Etzion planted 1,977 acres of pine trees from the western slopes of Gush Etzion until the Elah Valley, not far from where the 35 Jewish fighters were murdered. The forest land had been purchased in the 1920s by Shmuel Tzvi Holtzman, founder of the El Hahar Company (“To The Mountain”).

The forest began to disappear in the 1990s. Aerial views conducted by the Security Ministry show a thinning out of the forest, as well as completely bald areas. Non-Israeli Arabs from the villages of Jaba and Nachlin turned the forest into a source of income by cutting down tens of thousands of trees with electric saws. They were then removed by heavy vehicles which blocked the routes into the forest. The army and the local Civil Administration were not successful in halting the destruction.

At the initiative of the Gush Etzion Regional Council and the encouragement of The Jewish National Fund and the Defense Ministry, it was decided to establish a farm in order to maintain the forest.

The Kashuela Farm was founded on May 24, 2012. It is named after Yaakov Zarchi, a Palmach fighter whose nickname was Kashuela. He was supposed to have been part of the Lamed Hei convoy, but, due to a shortage of weapons didn’t take part. He was killed on Tu B’Shevat in the   Battle of the Castel on the road to Jerusalem.

The Kashuela Farm extends over 3,460 acres in the community of Gevaot, a 25-minute drive to Jerusalem and a 40-minute drive to Tel Aviv. Its residents are Techiya and Yair Ben David and their two children Shira and Yaara and Techiya’s sister Orli and her husband Meir Friedler.

They were given 618 acres of land for pasture and the flocks of sheep, goat and turkeys are primarily sold for meat. There are hothouses for blueberries and raspberries, and beehives. Taking the flock out to pasture helps keep away potential thieves and helps reduce fires.

For the first year and a half they lived in army tents with dirt floors. They were connected to neither water nor electricity. When they wanted coffee, they had to heat water on a fire. To bathe, they had to heat the water over that same fire – which meant they went back to Alon Shevut for showers when possible. Soon they received larger tents to live in and mats to cover the ground. Eventually, they moved into structures that resemble greenhouses. They are made of clear plastic with plastic tubes running through it and covered with advertisement posters made from synthetic material. The ground is covered by mats. Most of the daylight hours are spent outdoors. Plumbing only made its debut two years ago when they opened up tourist accommodations on the farm. Until then, they used a compost toilet.

“Our job is double: preventing commercial cutting down of the trees and preventing over-pasturing which damages the ecological balance of the forest,” explains Yair. “Therefore the Arab shepherds don’t see our presence here in a positive light. We know most of them and they know us, but despite this they continue to enter the forest – sometimes getting close to the farm to test what our reaction is. They send an elderly person with a few sheep. When they are successful, they come closer. Any person sent could be gathering information in order to plan an attack.”

They have caught quite a few Arabs who came to the forest with electric saws to cut down trees. They photograph them and call the authorities. Unfortunately the Arabs are held for a few hours and then released. For legal proof, one needs a photo in which a person is cutting a tree with a saw in his hand. If the Arab was photographed walking around the forest with an electric saw and in another photograph there is a freshly cut tree trunk – well, that’s not enough evidence according to the law.

Since the farm was established there has been a significant decrease in sabotage and damage of the forest. There has also been a reduction of land encroachment by the Arabs.

Orli and Meir lived on the farm for about five years. Meir and Yair would take turns at nightly guard duty. When, for example, there was a family simcha, they would try to find a volunteer or two to guard the farm. But there were times when one of them had to miss the family simcha and stay on the farm to guard it.

I first heard about the Kashuela Farm from our two youngest sons, Eliyahu Yeshaya and Yisrael Meir, who had done guard duty there. I certainly felt uneasy about having them go unarmed. Eliyahu Yeshaya told me that there are guard dogs there as well. If there was a problem, they would awaken Yair or Meir. Baruch HaShem, their night of guard duty was uneventful. During ninth grade, Yisrael Meir would go weekly with fellow classmates to volunteer.

Guarding the farm became a lot more difficult once Orli and Meir left. They had never intended to live there long-term like Techiya and Yair. Subsequently, several couples and a single guy have come and gone. The Ben David family was left on its own.

So far, three babies have been born to the Ben Davids on the farm: Daniel is six, Hadassah is four and Harel is ten months. Their oldest Shira is eleven and Yaara is eight. (Yaara, which means forest, was born before they moved to the farm.) They also have two dogs.

Yair, 42, is in charge of the agricultural aspects of Kashuela, while Techiya, 32, is in charge of the tourist attractions. There is a camping site and people can bring their own tents or be supplied with tents of various sizes as well as mattresses and mats on the ground. I think that the Indian teepees they have are really cool. For those who prefer a bed, there is a guesthouse, with another one in the works.

The Ben Davids are very thankful for a volunteer group called Shomer Yesh (Guarding Yehuda and Shomron). Its formation was inspired by the group HaShomer HaChadash (The New Guard), a grassroots organization started in 2007 to help farmers and ranchers in the Galilee and in the Negev safeguard their land. HaShomer HaChadash was inspired by HaShomer, a Jewish defense organization established in Palestine in 1909-1920.

What did our son Eliyahu Yeshaya do to celebrate this past Israeli Independence Day? He stood guard at Kashuela – this time with his own pistol – so that Yair could get a night’s sleep. At some point, a cousin of the family, who is a friend of Eliyahu Yeshaya’s, joined him on guard duty. Most nights, however, there are no volunteers or friends to do guard duty, and so Yair is on his own.

Now, don’t think guarding is foolproof. During Rosh Hashanah of 2018, about 100 sheep and goats were stolen, causing severe economic damage. As a result, the amount of land that is being protected has decreased.

With the revenue from the tourist aspects of the farm, the Ben Davids have been slowly purchasing more sheep and goats and today the flock numbers about 100. There are now three full-time volunteers to care for the animals. They are all youth-at-risk and work with a teacher once a week to prepare them for matriculation exams.

Several other security incidents have occurred over the last months. Techiya was walking with her infant in his stroller and did not realize that two Arabs had entered the farm and stole two ATVs.

More recently, an Arab entered their home one Shabbat night. It seems Yair had come into their home to rest before the long night of guard duty and fell asleep. At 4am, an Arab drove to their farm, parked his car and walked to their home. He opened up the flap of their “home” and shone his cell phone in. Techiya woke up, saw him and screamed. Yair chased him, caught him and called the army who came and took him away. Techiya told me that only one of the children woke up. Techiya told him things were fine and he should go back to sleep. In the morning Techiya was relieved to see that her son had no memory of this event. Their oldest child, Shira, had been spending Shabbat with Yair’s parents.

Techiya told me that they added more cameras in the forest and two nights in a row at around 11pm, a figure appeared on the cameras. The army was called in, but they didn’t find anyone. Yair decided to take the matter into his own hands. He and a few friends spent three very cold nights in the forest and finally caught a young Arab woman. The authorities were called, and she was handed over to the Shabak, the Israeli Secret Service. She had numerous photos of the Kashuela Farm on her phone.

It was months before they could move back in. Why don’t they just build a normal home, you wonder? They have applied to get what is called Tabu, a land registry deed, but the process can take years.

With all of the immense difficulties of daily life, why do they live here?

“We wanted to protect Eretz Yisrael and to return to our roots – to what the pioneers did here 70 years ago. Zionism didn’t end in the year 1948; it is alive and here today,” says Yair.

Techiya said that they are living with the values with which their parents imbued them. Another catalyst for choosing to live out in the sometimes Wild West was the two and a half-months they spent in the country of Georgia. They were enthralled with the way people lived in harmony with nature. “They live simply, and they are happy. They grow what they need, and they don’t waste food…We could have stayed there forever,” Techiya confided. “The life that we had led was a constant chase. Yair had finished law school, and he was attempting to decide what to do. Our trip to Georgia made us change focus.”

They are crowdfunding to raise money to help prevent burglaries and sabotage. They need: $45,000 for security cameras, an electric gate and motion sensors; $11,000 for 24-hour surveillance from video cameras; $25,000 for an ATV for security and surveillance.

They would also like to continue maintaining the Lamed Hei Forest, which includes 3,460 strategic acres. For that they need $86,000 to replace the sheep that were stolen last year. A flock of 100 sheep can occupy an area of about 2,000 acres.

You can view their campaign at https://www.jgive.com/new/en/ils/donation-targets/27653 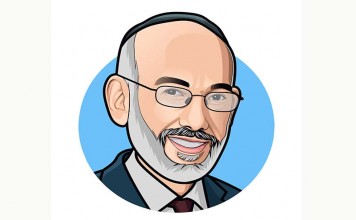 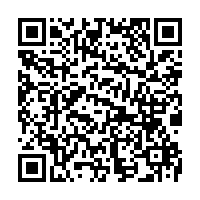