Mayor de Blasio’s response to the recent surge of violence is, “We need more social programs.” Is de Blasio really that clueless?


De Blasio is directly responsible for the rash of violence. By tying the hands of the police during the recent riots and giving free rein to looters and arsonists, de Blasio made it very clear that criminals can get away with serious crimes in New York City. He couldn’t make it clearer if he distributed crowbars and Molotov cocktails.

In the aftermath of the riots, you’d expect de Blasio to come up with a plan on how to deal with such lawlessness in the future. But no. Instead, all we hear is talk about police reform.

De Blasio has completely demoralized the police and greatly encouraged criminal behavior. The notion that all this can be reversed with social programs is mind-boggling nonsense!

Shadchanim Can Be Cold

Kudos to “Anonymous” who had the courage to say it like it is in her op-ed last week (“Do Shadchanim Even Care?”)!

Unfortunately, I have had many similar experiences over the years (yes, years!) with over 75-plus shadchanim! They listen to your plea, promise to help, and then… silence. Nothing. For days, weeks, and months.

It is disheartening, discouraging, and hurtful. You bare your soul seeking suggestions, holding onto hope that maybe this shadchan is the messenger from Hashem who will send the “Right One.” And then no response.

We are created in the image of Hashem. Are we not obliged to mimic His ways – by showing compassion, kindness, and respect for others?

The author of the article writes: “The [shidduch] crisis is caused by shadchanim’s callous attitude towards the women they are supposed to be helping.” Sad but true!

Schumer Is No Shomer Yisrael

I hope no Jewish organization ever invites Senator Charles Schumer to address their members again. Too often, when he speaks to Jewish groups, he spouts what he believes they want to hear, always closing by describing himself – in a play on his name – as a shomer Yisrael (guardian of Israel).

What he really is, though, is a politician who has remained silent when important Jewish issues come up, leaving it to others – often non-Jews – to speak out.

He also stands by and says nothing as Pelosi does outrageous things. Does he not have a problem with Pelosi cozying up to Ilhan Omar, AOC, and the rest of the squad? Is it alright that Omar, an outspoken anti-Semite and anti-Israel BDS advocate, is appointed by Pelosi to sit on the House Foreign Affairs committee?

Is he afraid to say that Black Lives Matter is led by anti-Semites?

He is a huge disappointment, no shomer Yisrael, and if he goes to shul on Yom Kippur, he has much to atone for.

This is in reply to the hate-filled letter of Ivan S. in the July 17th issue of The Jewish Press:

As any objective Jew knows, President Trump has done more for the state of Israel and the Jewish people than any other president in U.S. history. Yet, Ivan S. saw fit to spew venomous hatred at our president. Even worse, he invoked the Torah and Hashem in espousing his view.

I don’t know Ivan S. or his background, but if he has any sort of Jewish education, he must surely know that baseless hatred is one of the worst sins a Jew can commit. And voicing personal, visceral hatred of the president without facts is a classic example of such hatred.

Jews and The New York Times

Barbara Alpern’s letter last week on “The New York Times’ Jews” is one of the most incisive I’ve read in The Jewish Press all year.

But calling the paper “little more than a liberal rag” is giving it a larger pass than it deserves. In my opinion, it is a high-brow purveyor of ultra-radical falsehood.

Alpern writes that the Times’ leadership includes Jews “who evidently don’t care about the future of true Judaism.” But these people are am haratzim (ignoramuses) – they know bobkes about Judaism – so how in the world could they possibly care?

Is the Criticism Deserved? (I)

Rabbi Chananya Weissman (“Are You an Assimilated Orthodox Jew?” op-ed, July 17) writes that Orthodox Jews who live in the Diaspora and refuse to make aliyah are committing the ultimate chillul Hashem, for which no amount of good behavior can compensate. That is quite an accusation.

Rabbi Weissman obviously bases his definition of chillul Hashem on Yechezkel 36:20, “They came among the nations where they came, and they desecrated My holy Name when it was said of them, ‘These are the people of Hashem, but they departed His land.’”

The Metzudas Dovid writes that this verse is referring to the generation of Jews who were exiled to Babylon. Their exile from Eretz Yisrael, and the non-Jews’ mistaken notion that G-d couldn’t prevent it caused a chillul Hashem. The Abarbanel writes that our exile and suffering causes Hashem’s name to be profaned.

But although the Ramban says dwelling in Eretz Yisrael is a mitzvah, the Rambam doesn’t include it in his list of the 613 mitzvos. (See Rabbi J. David Bleich, Contemporary Halachic Problems, vol. II p. 198.)

When asked about the obligation to make aliyah, Rav Yosef Dovid HaLevi Soloveitchik, zt”l, answered that rabbanim and educators, as well as those in kiruv, should stay in chutz la’aretz where they are building up Klal Yisrael (Nefesh HaRav, p. 98).

Finally, Rav Moshe Feinstein zt”l, (Iggeros Moshe Even Ha’Ezer 1:102) writes that the mitzvah to live in Eretz Yisrael is not an absolute obligation (mitzvah chiyuvi).

Let us try to be melamed zechus on our fellow Jews, and in the spirit of achdus, may we merit seeing the third Beit HaMikdash very soon.

Is the Criticism Deserved? (II)

Is the Criticism Deserved? (III)

It’s really sad that Rabbi Chananya Weissman wrote his diatribe, “Are You An Assimilated Orthodox Jew,” during the Three Weeks when Jews are enjoined to find zechusim in each other. Rabbi Weissman expresses contempt – not only for all Jews in the Diaspora – but even for the majority of those living in the Holy Land.

Let me share the following story: The fourth Lubavitcher Rebbe had two young sons who once sparred with one another. The older son was shorter than his brother, which bothered him, so he dug a small ditch and told his sibling to stand in it. His brother followed his instruction, upon which he exclaimed, “Now I’m taller than you!”

Their mother witnessed the incident and told her husband about it. The Rebbe later took the boys aside and said to them, “You don’t make yourself big by making someone else small.”

I’d suggest that Rabbi Weissman take this lesson to heart.

Bari Weiss showed much courage in condemning executives at The New York Times for their obvious bias in her resignation letter last week.

By doing so, she risked ever being employed again in her chosen profession. But she gave voice to many of us who are concerned that The New York Times is no longer a dispenser of news, but rather a propaganda vehicle.

Let us hope that her resignation letter is widely distributed and read so that readers of the Times will learn to take with a grain of salt the news stories and editorial pieces in that once proud newspaper.

In this highly-charged political season, I thought it important that frum Jews know what values Joe Biden thinks are important to the Jewish community. Here are excerpts from an article on LifeSiteNews.com in 2013:

“‘The Jewish people have contributed greatly to America. No group has had such an outsized influence per capita as all of you standing before you,’ Biden said last Tuesday night at a reception hosted by the Democratic National Committee in honor of Jewish American Heritage Month.

“Biden offered praise for Jewish cultural and artistic ‘movements in America’ that he said were responsible for changing the country’s attitudes on marriage [emphasis added].

The article also quoted me extensively, saying, among other things: “I call on Biden to go back to Sunday school and see what the preachers and teachers of his grandparents taught on [homosexuality], and then he should offer a profound apology….” 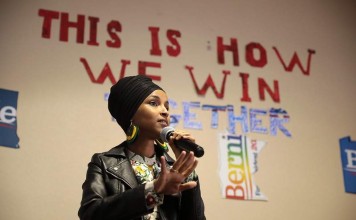