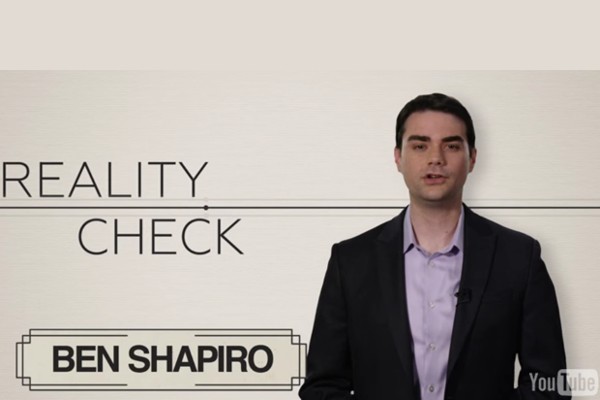 If you aren’t familiar with Ben Shapiro, you’re simply not paying attention.  The 35-year-old conservative pundit is almost supernaturally articulate. With an encyclopedic memory, razor-sharp reasoning, and a lightning-quick mind, he eviscerates rhetorical adversaries without even breaking a sweat.

The youngest syndicated columnist in history, Mr. Shapiro doesn’t merely deflate his ideological opponents… he leaves them gaping like wide-mouth bass out of water by exposing irrefutably their own logical and moral inconsistencies.


That’s why the recent headline seemed like it had to be a misprint:  Ben Shapiro says BBC host destroyed him.  How was such a thing possible?  I had to take a look.

The interview with BBC host Andrew Neil left me annoyed on several counts.  First and foremost, Mr. Neil didn’t “destroy” Ben Shapiro at all. What he did was demonstrate a style of media manipulation that was at once masterful and contemptible.

Throughout the interview, Andrew Neil never raises his voice or changes his inflection. Superficially, he appears the epitome of professionalism and decorum. By doing so, he brilliantly disguises the malicious intent behind his questioning.

Mr. Neil invokes such hyperbolic epithets as “barbaric” and “return to the dark ages” while simultaneously accusing his guest of inciting incivility in public discourse.  He unearths quotes from years earlier that Mr. Shapiro himself has long since disavowed.

With every scurrilous question, Andrew Neil barely pauses to allow his guest to answer, talking over his Mr. Shapiro’s answers as he bulldozes onward from one inflammatory denunciation to the next.  And then he has the audacity to accuse his guest of interrupting him.

Clearly, this was a new experience for Ben Shapiro, whose rapid-fire arguments regularly leave rhetorical combatants struggling to keep up and frequently losing their cool.  This time, in the face of such brazen discourtesy and hypocrisy, it was Ben Shapiro himself who lost his cool. And that’s where he lost face and lost the debate.

What’s particularly baffling is Mr. Shapiro’s apology for coming to the debate “unprepared.” Preparation was not the issue, unless he meant being unprepared for an interviewer extraordinarily adept at masking outrageous assertions beneath a disingenuous veneer of British gentility.  In the end, Andrew Neil did not destroy Ben Shapiro. Ben Shapiro self-destructed by allowing his justifiable outrage to make him appear unhinged in contrast to the unflappability of Andrew Neil.

Here we find yet another example of how modern political debate has devolved into gladiatorial spectacle.  Even the savvy Ben Shapiro found himself hoist on his own petard and then, worse still, seemed unable to accurately assess where the interview unraveled.

News programs are no longer about facts or reason; they are about scoring points, humiliating opponents, and preaching to the choir.  It’s the rare viewer who has patience to follow the thoughtful syllogisms of civil logicians. Audience’s prefer the adrenaline rush of shouting matches and the illusion of spontaneity provided by well-rehearsed zingers.

And when each program ends, viewers celebrate the victory of their hero and congratulate themselves for keeping up with current events.

King Solomon says, “The tongue of the wise improves knowledge, but the mouth of fools pours out foolishness.”

By cherry-picking facts and suppressing rebuttal, it’s easy to create misperception. By never allowing ourselves the other side to have its say, we easily convince ourselves that we are on the right side of every issue.

In the short run, we can’t stop others from employing these tactics. But if we are committed to truth, we will learn to recognize clever rhetorical deceptions and, by calling them out, prevent them from framing the debate.

It is our responsibility to help the pure light of reason pierce through the glitter of showmanship. To do so, we must prepare ourselves not merely with facts and logic, but with determined resolve and articulate speech to carry our words above the confusion of spectacle.