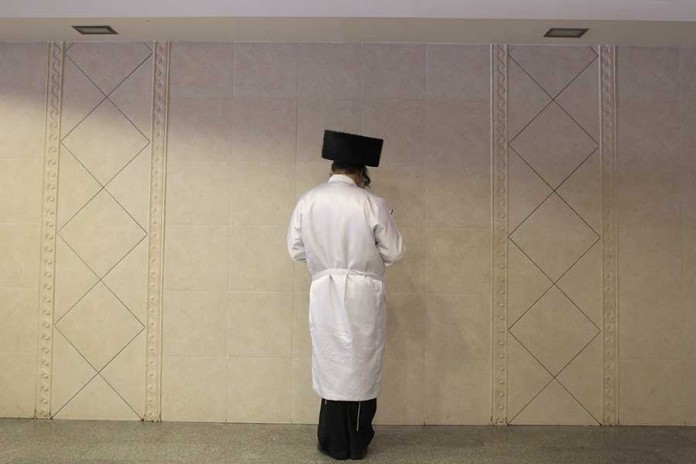 The kittel is the white robe worn by Ashkenazi married men on certain occasions, particularly on the High Holidays. It is worn during this time of year as a reminder that one must pray not only for one’s own needs but for one’s family’s needs as well. Women, and most Sefardim,1 don’t wear a kittel on the High Holidays. Nevertheless, it is customary for even those who don’t wear a kittel to wear white garments on Yom Kippur.2

The kittel is also mean to be reminiscent of the white shrouds that are worn by the dead. This is intended to arouse feelings of humility and repentance.3 In fact, the word “kittel” derives from the Aramaic word “katala,” which means death.4 Although most kittels are made from cotton, some individuals prefer to wear one made of linen in order to recall that most shrouds are made from linen.5


In most communities, kittels are generally not worn on Rosh Hashana except by those who are officiating in some capacity, such as the chazzan or baal tokei’ah.6 Others do wear a kittel on Rosh Hashana7 based on the Talmudic teaching that “on their day of judgment (Rosh Hashana), they wear white garments, shave their beards, eat, drink, and rejoice, confident that G-d will perform miracles for them [and seal them for a good year].”8

On Yom Kippur, the kittel takes on added meaning. In addition to reminding one of the day of one’s death and arousing feelings of humility and repentance,9 kittels are worn to emulate the angels who, we are told, wear white.10 Wearing a kittel during the High Holiday season also symbolizes the theme of forgiveness and atonement, as it says: “Our sins shall be made as white as snow.”11 One should put on one’s kittel at home before going to the synagogue for the Kol Nidrei service.12 Anyone leading any part of the service on Yom Kippur is expected to wear a kittel.

Closely related to the symbolism of the kittel is the custom to change the parochet that covers the aron kodesh to a white one for the High Holidays. In most congregations, the Torah scroll coverings are changed to white ones as well.13 Again, the emphasis on white is intended to recall the dominant theme of the season – forgiveness of sin – which Scripture compares to the whiteness of snow.14 Many congregations leave the white garments on until after Shemini Atzeret/Simchat Torah.

A kittel is also worn at the Pesach Seder. In addition to all the symbolism of the kittel mentioned above, it also represents freedom, the primary theme of Pesach.15 As such, the kittel serves a double purpose on Pesach, symbolizing freedom while at the same time ensuring that we don’t get too carried away with light-headedness.16 In some communities, everyone wears a kittel at the Seder, while in most others, only the one leading the Seder wears a kittel.17

Some authorities teach that one should not clean one’s kittel after Pesach. This is because the wine and matza stains on one’s kittel from the Pesach Seder – proof of one’s devotion to mitzvot – will serve well on one’s behalf on Rosh Hashana and Yom Kippur. In this way, the merits of the mitzvot of the four cups of wine and the matza assist one in attaining Divine favor on the High Holidays.18 Other sources, on the other hand, teach that one’s kittel should be especially “white” and “clean” on Yom Kippur.19

In most Ashkenazi communities, a groom wears a kittel on his wedding day. Some have the custom to wear it as their outermost garment while others wear it under their wedding suit.20 A groom wears a kittel under the chuppa because a bride and groom’s sins are forgiven on their wedding day.21 It also serves to recall the verse, “At all times may your garments be white.”22 In addition, the kittel reminds the groom of his day of death.23 This serves to ensure that the groom does not get carried away with excitement and light-headedness on his wedding day.24 In some communities, the shoshvinin dress the groom in his kittel.25 There is a custom for a bride to give her groom a kittel as a wedding gift before their wedding.26

In some communities, a man does not wear a kittel during his first year of marriage. Although the source for this custom is unclear,27 it might be because in ancient times most men married at eighteen or nineteen years old, and one is not subject to Divine punishment under the age of twenty. As such, there is less reason to require such a young man to wear a kittel.28 So too, most men under twenty do not yet have children, thereby limiting the need for them to remember their “family” on the High Holidays. It is also suggested that since the groom has already worn a kittel that year – at his wedding – there is no need for him to do so again.29 Others suggest that wearing a kittel during one’s first year of marriage actually infringes on the honor due to one’s wife. This is because there is a requirement for a man to rejoice and celebrate with his wife during their entire first year of marriage, and the kittel represents curbing such happiness.30 Nevertheless, common custom in most communities is for a man to wear a kittel even during his first year of marriage.31