In a previous column, we mentioned the idea of giving thanks to Hashem even for our misfortunes. I’d like to elaborate on this point further.

Rebbe Nachman of Breslov tells us that all of our suffering comes from a lack of knowledge. If we would be able to focus on the ultimate purpose of our suffering and misfortune, we would realize that it is all a great favor from Hashem.


“On that day, Hashem will be one and His name will be one (Zecharia 14).” This is a famous pasuk that we say three times a day in Aleinu. But isn’t Hashem and His name already One? Our Sages answered this question as follows: During the current pre-messianic era, we say the beracha “Hashem is the true judge” when something seemingly bad occurs, and the beracha “Hashem is good and does good” on good news. However, in the future Messianic era, we will make the blessing “Hashem is good and does good” on everything (Pesachim 30a).

In other words, the difference between the current era and the future messianic era is our ability to recognize Hashem’s goodness within the “bad.” This is the meaning of Hashem’s name currently lacking Oneness.

Rebbe Nachman puts it like this: “So it turns out that the concept of ‘One’ is the ultimate goal, and that goal is all good, since the purpose is only good. Even all the trials and tribulations and bad things a person experiences – if they are viewed within the context of the ultimate goal, then certainly they are not bad at all; rather, they are great gifts. Without a doubt, all tribulations come intentionally from Hashem for a person’s ultimate good, whether they were sent to remind a person to do teshuva, or whether to cleanse the person of their sins, etc. So, it turns out that all forms of suffering are actually great gifts, for Hashem’s intent is certainly only for the good” (Likutey Moharan I, 65).

Our current task in the pre-messianic era is to have faith that all the trials and tribulations we go through are a great favor from Hashem, despite our inability to comprehend this with our finite minds.

When we take this leap of faith and accept our suffering with joy, we bring salvation not only to ourselves but to the entire world as well, as the Gemara tells us: “Rabbi Yehoshua ben Levi says, ‘All who accept their tribulations with joy bring salvation to the world'” (Taanis 8a).

May Hashem help us to accept everything with joy and thereby bring true salvation to ourselves and the world. 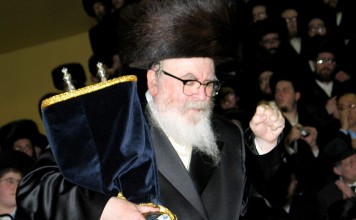