JERUSALEM – After a visit at the Dome of the Rock and after descending from the Temple Mount Pope Francis visited the Western Wall (Kottel) today (May 26), where he prayed and placed a note among the Kotel’s stones.

Before approaching the Holy site the Pope received a briefing on the history of the Temple Mount by a guide using a three dimensional map. The Pope heard of the two Jewish Temples, their destruction, and the evolving architecture of the Temple Mount. Pope Francis was then addressed by Rabbi Shmuel Rabinowitz, Rabbi of the Kotel and the Holy Sites, and heard him speak proudly of the Jews’ history, of their exile and redemption.


“The Jerusalem you have arrived at, honored Pope, is not only the physical Jerusalem. It is also the Jerusalem of dreams; the dream of millions of Jews throughout two thousand long years of exile. Jerusalem is a dream that has been realized; we are still walking in it as dreamers, expecting the full realization of the dream,” said Rabbi Rabinowitz. Relating to the destruction of the Second Temple, Rabbi Rabinowitz spoke of Titus’s Arch in Rome, which depicts the exile of the Jews.

“It is true, Titus succeeded in taking the Menorah (candelabrum) and the tools of the Temple; but the light of faith, and the hope to return to the land of our fathers, he was not successful in extinguishing,” he remarked. “We have traveled a long road on the way home; we have journeyed from the four corners of the land.”

Possibly hinting to Christian persecution, Rabbi Rabinowitz said: “For two thousand years we have had our fill of scorn and sadness, but every day we prayed and believed ‘Next year in Jerusalem.’ We merited a great miracle to return here after a long exile and a horrifying Holocaust. Thank God, the People of Israel live on, in the Land of Israel.”

Noting a long list of Jews who immigrated to Israel throughout its history, Rabbi Rabinowitz remarked that throughout the exile Jews continued believing in their status as the chosen nation, not out of arrogance but out of a commitment to the nation’s mission to serve God. Finally, quoting the vision of the prophets, he read from the Book of Isaiah : “And many peoples shall go and say: ‘Come ye, and let us go up to the mountain of the Lord, to the house of the God of Jacob; and He will teach us of His ways, and we will walk in His paths.’ For out of Zion shall go forth the law and the word of the Lord from Jerusalem.” Rabbi Rabinowitz concluded with a request. Referring to global anti-Semitism, Rabbi Rabinowitz said: “I would like to address – together with you – the believers of all religions, asking them to fight hatred and anti-Semitism which has increases more and more. Only two days ago we have felt it again, and the voices that are heard all the time do not bring good tidings. We will raise to them from Jerusalem a blessing of peace.”

The Pope received a simultaneous translation of Rabbi Rabinowitz’s wors.

After hearing Rabbi Rabinowitz’s speech, the Pope placed a note in the Wall, and then signed a visitor’s book where he expressed his thanks and quoted the prophet Isaiah: “Nation shall not lift up sword against nation, neither shall they learn war any more.” The Pope received a book from Rabbi Rabinowitz on the Temple and its heritage.

Parallel to the Pope’s visit, The Temple Institute in Jerusalem, which educates about the Temple and actually prepares for the building of the Third Temple, released a statement demanding that the Pope return the vessels of the Temple. Under the title ‘Give Back the Vessels’, the statement read: “Today the Pope is in Jerusalem, and we demand: Return at once the Holy Temple vessels stolen by Titus in 70 CE and later hidden away in the Vatican where they have remained for over 1000 years. In your own words, Pope Francis, the situation is “increasingly unacceptable.” Return the stolen vessels at once!” 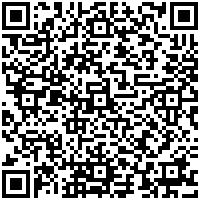