Roger Waters, former frontman for the 70’s rock band Pink Floyd and current number one international Israel-hater and aggressive advocate for boycotts of all things Israel, showed up at the New York City conference put together by Israeli newspaper Haaretz in coordination with the far-left New Israel Fund. Waters was treated like a…well, a celebrity.

Why Waters would show up at a conference put on by an Israeli newspaper is only confusing if you think of Haaretz as a newspaper which is anything but also aggressively focused, like Waters, on revealing and repeatedly emphasizing the most egregious accusations aimed against Israel.


First, a reminder of how much Waters hates Israel. A constant refrain of his is to compare Israel to Apartheid South Africa, facts – like Arab members of the Knesset, an Arab member of the Supreme Court – be damned.

In 2012, Waters spoke at the United Nations, condemning Israel as an Apartheid state, and blaming Israel for denying the “Palestinian” people their “inalienable right” to “self-determination.” That same year he was a leader of the effort to get Carnegie Hall to cancel the scheduled appearance by the Israeli Philharmonic Orchestra, and he helped convince Stevie Wonder not to appear at a benefit in Los Angeles for the Friends of the IDF.

Roger Waters assailed actress Scarlett Johansson for working with SodaStream and musician Neil Young for his planned performance in Israel in 2014. In an open letter to Johannson, Waters called her choice to continue representing SodaStream and stepping down as a representative of Oxfam “an act of intellectual, political, and civil about face, that we, all those of us who care about the downtrodden, the oppressed, the occupied, the second class, will find it hard to rationalize.”

For years Waters has been bullying other celebrities, seeking to intimidate them into canceling any planned visits to Israel. This past fall, Waters went after Jon Bon Jovi who was scheduled to perform with his band in Israel. Bon Jovi snubbed Waters and performed in Tel Aviv’s Hayarkon Park on Oct. 3. The lead singer even told Israelis, to great applause, they should adopt his song, “We Don’t Run.”

The Haaretz/NIF conference was described in its promotional literature as “an opportunity for our community – those of us who care about Israel and about democratic values – to get together, to ask the hard questions, and to drive our movement forward.”

At the Haartz/New Israel Fund conference, dozens of hard-left Israeli Israel-bashers appeared, alongside such luminaries as Saeb Erekat, perennial spokesperson for the Palestinian Authority, Peter Beinart, an American Jewish pro-BDS advocate, Jeremy Ben-Ami, head of the faux pro-Israel J Street, newly-appointed by President Obama ISIS czar Rob Malley, and many, many others who share a goal to publicly humiliate Israel through the pages of such media handmaidens as Haaretz.

Others were also slated as speakers at the conference, such as Israel’s president Ruvi Rivlin and U.S. Ambassador to the U.N. Samantha Power.

But what was Waters doing there? He had on an official name tag, but he wasn’t a speaker (or singer). Maybe he had simply signed up to attend. For this he was  willing to put aside his hatred and refusal to be associated with, or allow anyone else to be associated with, anything Israeli, if the Israeli item is just as virulently anti-Israel as is he.

Haaretz writer and U.S. editor Chemi Shalev was apparently thrilled to be shown in a picture with Israel-hater Waters. He tweeted a picture of the two of them with the (untrue) caption, “Boycott/shmoycott, no Pink Floyd addict can resist the thrill of meeting Roger Waters at #HaaretzQ.” 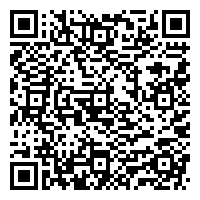