Senior Foreign Ministry officials estimate that there is no possibility for a long-term peace agreement with the Palestinians based on the current outline of the talks. In their opinion, it would make much better sense to try and direct the talks toward another interim agreement. They are convinced that PA Chairman Mahmoud Abbas is more likely to embrace such an interim deal than a peace agreement reflecting Israel’s plans for retaining East Jerusalem and the “cluster of settlements.”

The only problem is that Abbas has objected profusely every time he has been presented with the suggestion of an interim deal. He’s very much an all-or-nothing kind of guy on this issue, and he would definitely rather stay under the dreaded “occupation,” daily check posts and all, than come back to his people with less than 100 percent of the territories.

But Hope is, apparently, a prerequisite for working in Israel’s Foreign Ministry, especially since, on paper, an interim deal would be so much easier to accomplish.

Meanwhile, it’s probably a fait accompli that the Israeli government will release 82 Palestinian prisoners with Jewish blood on their hands. In Israel, this will most likely evoke an outcry from the victims’ families. In the PA it’s already being ridiculed as a meaningless gesture, considering there are upwards of 8,000 Palestinian security prisoners under lock and key in Israel.

But we might get an unexpected benefit out of all this: Jewish Home minister Uri Ariel and other national religious officials are demanding that if the U.S. government wants Israel to let go of killer Arab prisoners for the sake of peace, it should set an example by releasing one Jewish prisoner who didn’t kill or injure anyone, and has served out an outrageous amount of time for his sins.

Will they release Jonathan Pollard as a confidence building measure?

Let’s see if the Obama team has even a shred of the sensitivity and courage it is demanding of Netanyahu et al.

Ynet reported that a source in the cabinet believes that Netanyahu and Kerry reached an agreement on settlement construction, permitting continued construction in Ariel, Gush Etzion and Ma’aleh Adumim, which Israel says are within the major settlement bloc it would hold on to, while in the rest of the disputed territories the de-facto freeze that began last year will continue, with no new projects breaking ground.

Abu Mazen (Abbas’s nom de guerre) is concerned that an interim deal would, inevitably, become the permanent deal. So the nice folks at the Foreign Ministry are planning to offer him most of the areas of Judea and Samaria within a reasonable period of time following the signing of an interim deal, Ma’ariv reports.

In any event, the law requires a national referendum on any peace deal that includes giving back territory, and Netanyahu intends to obey the law.

The left has already started its campaign against a national referendum, using talking points involving the following scenario: on the eve of the referendum, some Arab somewhere shoots a rocket at an Israeli kindergarten, or blows up a bus – it would tip the vote in favor of the naysayers.

Of course, the same argument also betrays the left’s own mistrust of the other side’s ability to provide the desired peace. In essence, they agree that there will always be someone on the Arab side who would benefit from destabilizing the region using terrorism. Why, then, should Israel strip itself of one of its greatest security assets—the fact that the IDF now controls the roads in the very area that could produce the next rocket attack on, say, Ben Gurion airport?

The Administration is insisting that Netanyahu stay away from those interim deal ideas and instead spell out early on in the discussion the contours of the new Palestinian borders as he envisions them. That’s not going to be an easy thing for Bibi, because, let’s face it, no matter what map he draws, he’s going to upset a vast number of people, most critically inside his own coalition government and inside his own Likud party.

Abbas: Palestinian State Will Be ‘Judenrein’ 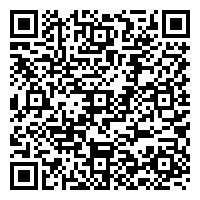