United States Ambassador to Israel David Friedman, who is part of the US peace plan negotiating team, on Tuesday night told CNN’s Christiane Amanpour that he believes in giving an autonomy to Palestinians, not a state.


Ambassador Friedman said that the limits of the Palestinian autonomy would be defined by the security needs of the State of Israel.

The ambassador supported Netanyahu’s cabinet’s decision to build 715 housing units for Arabs in Area C of Judea and Samaria, which is under full Israeli control, saying that “this is something that has not happened in a long time. We really care about improving the quality of life of the Palestinians, we think it is good for Israel and the Palestinians.”

In June, Friedman told the NY Times that Israel has the right to impose its civilian rule over the Jewish settlements in Area C. 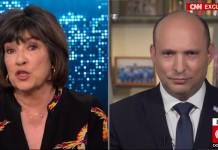 Watch When Naftali Bennett Does a Good Job