Prime Minister Naftali Bennett is facing harsh criticism after calling Judea and Samaria “the West Bank,” and his political opponents are calling for the toppling of his government.

Speaking at a press conference with US Secretary of State Antony Blinken on Sunday, Bennett, who ran on a right-wing ticket, said his government is “working hard to improve the lives of Palestinians in the West Bank and Gaza.” Bennett appears to have read the statement off of a printed paper in front of him.
5001259″ height=”350″ src=”https://www.youtube.com/embed/aOnveUW-Uo4″ title=”YouTube video player” frameborder=”0″ allow=”accelerometer; autoplay; clipboard-write; encrypted-media; gyroscope; picture-in-picture” allowfullscreen>


Yigal Dilmoni, Director General of the Yesha Council, an umbrella organization for councils and organizations from Judea and Samaria that Bennett once headed, stated in response that “such an expression is another deterioration of the government’s values. It is added to the freeze on construction [in Judea and Samaria] and the turning of its back on the Israeli communities. Such a government should go home.”

Member of Knesset Ofir Sofer (Religious Zionism) stated: “How unsurprising that such a statement comes from someone who has joined terrorist supporters and anti-Zionist parties. The former CEO of the Yesha Council erases his ideology.”

“A very dangerous statement for the future of Judea and Samaria,” he warned.

MK Itamar Ben Gvir (Religious Zionism) stated that “it is unbelievable that former Yesha Council director and current Prime Minister Naftali Bennett is adopting the Palestinian narrative that believes in ‘occupation.’ This is another step on the way to a left-wing government after promising ten degrees to the right.”

The head of the Beit El Council, Shai Alon, said that “the prime minister’s statement about Judea and Samaria proves how dangerous the situation is for the Israeli settlement.”

“Bennett has already disengaged from Judea and Samaria, he should be prevented from carrying out the disengagement on the ground. The construction freeze is just the tip of the iceberg. Bennett is dangerous for Israel. The government headed by him must be overthrown,” he declared.

Shas chairman Aryeh Deri said that “Bennett’s definition of Hebron, the city of the Patriarchs, of ancient Shiloh, of Mount Gerizim and of Mount Ebal, of Rachel’s tomb and of ancient Susya as the West Bank shows the depth of the rift, his loss of the way and the loss of control.”

MK Avi Maoz (Religious Zionism) warned that “it has once again been proven that someone who speaks consistently and highly of Judaism and Zionism, but in practice, he acts in exactly the opposite way and promotes for his personal interests the disengagement of the State of Israel from all Jewish and Zionist value.”

In 2018, Bennett slammed Yair Lapid for using the term, saying it was invented by non-Zionists, and that the truth is that it is “Judea and Samaria.”

Bennett’s spokesperson responded, “Usually the prime minister uses the term ‘Judea and Samaria’, both in Hebrew and in English. This is a coincidental statement, and no special significance should be attributed to it.”

Interior Minister Ayelet Shaked told Radio 103 that she thinks it was just a mistake. 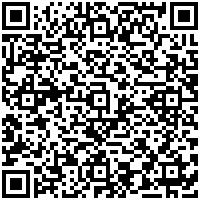