Rachel Brosnahan, who plays the fictional, 1950s, wealthy Jewish housewife turned radical standup comic with the help of, among others, the real radical, 1950s standup comic Lenny Bruce, Mildred Maisel, in Amazon’s “The marvelous Mrs. Maisel,” on Sunday won her second Best Actress Golden Globe Award for the same role in the second season of the same show.

Brosnahan, who was born in Milwaukee, Wisconsin, is not Jewish, but if anyone deserves the title of honorary Jew for 2017-2018, no one would be more deserving than her, with the exception, perhaps, of Tony Shalhoub—a Maronite Christian whose father immigrated from Lebanon—who plays Mildred Maisel’s absent-minded professor father in the series. She said that had been “happily immersed” in the Jewish culture because of her growing up in the midst of Chicago’s Highland Park’s Jewish community: she was invited to Passover Seders, Bar and Bat Mitzvahs, and Hanukkah celebrations.


Miriam Maisel is a young, upper middle-class Jewish housewife living on the Upper West Side of Manhattan. Her husband of four years, Joel, a businessman whose father owns a sweatshop on 7th Ave. moonlights as a really bad comedian at a dive in the Village, with the selfless support of his wife. The ungrateful Joel leaves Miriam (Midge) for his secretary, and Midge goes on stage at the same Village dive to deliver a hilarious, brilliant and bawdy, impromptu set, about her life hitting rock bottom. She meets Lenny Bruce, bails him out and starts her rapid and quite mad climb to the top of the 1960s stand up world where women comics never get to see the glass ceiling, never mind break it.

Critic Paul Brownfield observed in Saturday’s LA Times that “’Maisel’ has become an endurance test of ethnic self-parody,” which is a marvelous and cogent note, worthy of the show being thusly maligned.

Brownfield also noted, quite profoundly, that “for a show so ostensibly obsessed with Jewish families and their too-close atmospheres, we know very little about the Weissmans and the Maisels (Joe’s and Midge’s families). Through two seasons — and one extensive Yom Kippur dinner scene — the show has yet to produce an ambulatory grandparent. Even if the show is meant to foreshadow a steadily accruing, generational disinterest in the immigrant struggle, the choice to leave out the elders, to avoid showing what formed these people, is a curious omission.”

You can’t argue with Brownfield’s points – and he makes many, many more. Mrs. Maisel is definitely a marker for the last chapter in the Jewish-American experience, when, like we said, you no longer need to hire Jews to play believable Jews.

Incidentally, that Yom Kippur meal scene, where, I admit, it was hard to decide whether dinner took place before, after or during the fast, and where the only one taking the fast seriously was a convert – reminded me of the immortal scene in Woody Allen’s “Sleeper,” where the underground members are trying to recreate the time-displaced Allen by playing out scenes from his 20th century life. Diane Keaton, in the role of Allen’s cartoonish Jewish mother at this pretend Jewish dinner, yells at her son: “Stop whining and eat your Bar Mitzvah!”

Nevertheless, who can argue with two consecutive Golden Globes for the same pretend-Jewish show? 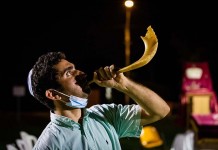 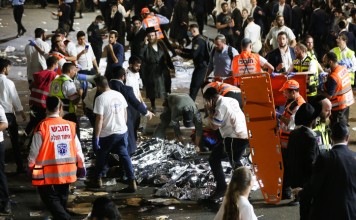 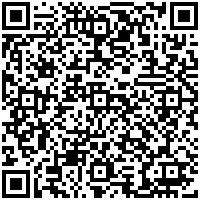