Hezbollah Deputy Secretary General Naim Qassem said Israel would not wage war on Lebanon because of what he called the mutual deterrence equation. Qassem said in an interview with the Iranian newspaper in Arabic Al-Wifaq that Hezbollah’s missiles were capable of hitting any target in Israel.

Meanwhile, the Lebanese daily al-Joumhouria claimed on Saturday that the Hezbollah” tunnels discovered by the IDF on the Blue Line last week are “old and deserted” tunnels that Israel is “exploiting for political ends.” The newspaper cited an anonymous security source who insisted “the tunnels that Israel and the UNIFIL are talking about are old and deserted, more than half of which have collapsed a long time ago.”


So far the IDF has reported unearthing three tunnels that start in Lebanon and enter Israeli territory, in the vicinity of northern Israeli communities, including the town of Metula.

But the Lebanese source reported that “the Lebanese authorities are insisting on the non existence of any new usable tunnels. They are waiting for the UNIFIL’s official report to expand on the matter.”

UNIFIL Head of Mission and Force Commander Stefano Del Col on Thursday visited the first Hezbollah tunnel discovered by the IDF and stated that “Based on the site inspection, UNIFIL can confirm the existence of a tunnel at the location.” He added that UNIFIL is now engaged with the parties to “pursue urgent follow-up action,” stressing that it is very important to determine the full extent of this “serious occurrence.”

Nasrallah’s deputy Qassem did not address the IDF’s Operation Northern Shield directly, but stressed that “it has not possible for the Zionist enemy to take military action against Lebanon because since 2006 it has been deterred by the ability of the Islamic resistance in Lebanon.”

“The rules of engagement created by Hezbollah in Lebanon and the deterrence they have imposed on Israel have made it very difficult for Israel to conceive of a major against Lebanon,” Qassem said.

And so, Lebanese propaganda is employing a two-punch approach: Israel is frightened of Hezbollah’s threat; and Hezbollah is innocent of any threat against Israel.

As soon as the weather up north clears up, the IDF is planning to turn the exposed Hezbollah tunnels into a tourism site for foreign dignitaries, who will get a first-hand impression of the unprovoked aggression of the Lebanese terror group. Channel 2 News even suggested that by promoting a global condemnation of this aggression, Israel may preparing the foundations for a preventive strike against the terror group which has amassed an estimated 150,000 rockets at Israel’s border. 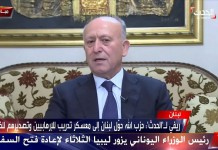