This could develop into the next, big anti-Israel story – in fact, it’s already happening and so far Israel is clearly baffled and unable to provide the information that would clear it of suspicion of wrongdoing. What’s known so far is that an 80-year-old Arab American man named Omar Abdalmajeed As’ad was found dead on Wednesday after being detained by Israeli forces in Samaria.

According to the Washington Post, As’ad spent much of his adult life in Milwaukee and moved back to the PA some ten years ago.

The IDF Spokesperson issued the following statement Wednesday night: “A Palestinian was found lifeless this morning near the town of Jiljilya in the area of the Benjamin Brigade. A preliminary investigation showed that the Palestinian was arrested during an IDF operation after resisting a security check. The detainee was released later that night (Tuesday – DI). In light of the circumstances of the case, the military police began investigating the incident, at the end of which the findings will be submitted to the military prosecutor’s office for examination.”

Jiljilya is a small Arab village near Ramallah, of which 99.3% is in Area A, and 0.7% in Area B – so, almost entirely under the Palestinian Authority’s control.

According to WAFA, citing Fouad Qattoum, head of the Jiljilya village council, As’ad was going home around 4:30 AM Wednesday after a visit with relatives when Israeli soldiers stopped his vehicle and pulled him out, blindfolded, handcuffed, and harassed him before leaving him in a building that was under construction.

Qattoum told Ha’aretz an IDF force had set up a temporary checkpoint at the entrance to the village, and the soldiers arrested several people— workers and vegetable sellers, who were on their way to work in the early hours of the morning, and As’ad. After a short time, the soldiers left the place, and then some of the detainees recognized that As’ad had lost consciousness.

Jiljilya Mamdouh Elaboud told Reuters As’ad “was lying face down on the ground, and when we turned him over we found an elderly man with no sign of life. After a local physician tried unsuccessfully to revive the man, he was taken to a Ramallah hospital where his body was being held until an autopsy can be performed.

State Department Spokesperson Ned Price said on Wednesday: “We can confirm the death of the US citizen Omar As’ad in a city near Ramallah. We have been in touch with Mr. As’ad’s family to express our condolences about this tragedy. We are providing, as you would expect, all appropriate consular assistance to the family at this time. We’ve also been in touch with the Government of Israel to seek clarification about this incident, and as you may have seen, the Israeli Defense Forces have indicated there’s an ongoing investigation into the matter. And we support a thorough investigation into the circumstances of this incident. Of course, out of respect for the family during this time, we have little more that we’re able to offer.”

As’ad’s family told Ha’aretz he was taken to a hospital in Ramallah, where he was pronounced dead. His brother said that As’ad was “an elderly man who suffered from respiration and heart problems.”

“I don’t understand how a man that age can be considered a danger,” the brother told Ha’aretz. “They handcuffed him and shoved him. That’s abuse… I have no doubt what he went through caused his death.”

Israel’s enemies, including IfNotNow, are already celebrating the case of the elderly Arab who was “tortured and killed” by Israeli soldiers – despite the fact that even the official PA news agency only blames the soldiers for handcuffing and blindfolding Asa’d, who had a history of cardiac and respiratory illness. 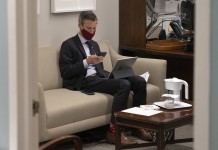 Phew: US Concedes Arab Girl Was Killed by Mistake