Portraits of great men are very important in Judaism. The Midrash relates that Yosef HaTzaddik was saved from sin by seeing an image of his father, and the Talmud quotes Rebbe as saying that he was sharper in learning than his peers because he merited to see Rabbi Meir (Eruvin 13). Thus, it is not surprising that nearly every Jewish home today is adorned with portraits of great rabbis.

However, portraits (and later photographs) have not always been popular in some Jewish circles. In the early days of the chassidic movement, as well as in Kabbalistic circles, sitting for a portrait was often frowned upon and sometimes even forbidden. Additionally, Jews in Arab lands seldom had portraits since Muslim culture prohibits them.


In light of these facts, it is fascinating to explore the origins of the portraits that have made it down to us. Below is a look at some of the more familiar ones.

The source of the classic portrait of the Rambam is surprisingly a non-Jewish work, Thesaurus Antiquitatum Sacrarum (1744-69), a 34-volume Latin encyclopedia. The author of the work states that he obtained the portrait from an old tablet, but does not give any additional information.

This portrait was later discovered by Italy’s Rabbi Isacco Samuele Reggio (1784-1855), who sent it to a German friend, Solomon Stern, who printed and disseminated it. This portrait was popularized in the early 1900s, appearing in Haggadot, sukkah decorations, and on the cover of a popular machberet used by numerous school children at the time. 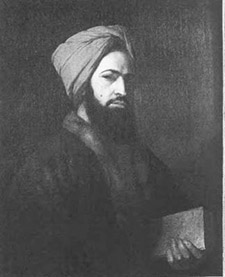 The Pri Chadash, R. Hezekiah da Silva, was born in Livorno, Italy in 1659. In 1691, he found himself in Amsterdam to print his sefer on Yoreh De’ah. The community there asked him to be their rabbi and, as a token of appreciation and admiration, commissioned his portrait.

The portrait shows the Pri Chadash in Turkish Jewish attire, with a fur-trimmed coat and a kaveze on his head. In the 19th century, a reproduction was made of this portrait with an inscription stating that one must say Shehechiyanu upon seeing an illustration of the Pri Chadash. 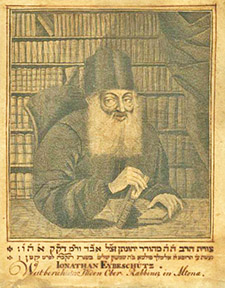 The Rabbi Jonathan Eybeschuetz portrait we are familiar with is based on an engraving produced by Dr. Elimelech Pulda (or Pulder).

R. Yaakov Emden – R. Eybeschuetz’s archenemy – writes that the followers of R. Jonathan Eybeschuetz created their rabbi’s portrait in order to kiss and hug it. He went so far as to accuse one of them of placing the portrait in the aron kodesh.

Already during R. Jonathan Eybeschuetz’s lifetime, his portrait was often reproduced in etchings and engravings and was treated by many of his followers as if it were an amulet. 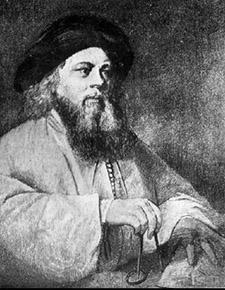 His portrait has traditionally been ascribed to the artist John Singleton Copley. In the original portrait, formerly owned by the Anglo-Jewish scholar Cecil Roth, the Baal Shem is seen in Eastern-style clothing and holding a compass, which would have been very out of place in a portrait of the Baal Shem Tov but more expected in one of the Baal Shem of London.

Only one portrait of the Vilna Gaon from his lifetime is known to have been made. This illustration slowly evolved, with different artists adding different details (such as tefillin) leading us to the portrait we are familiar with today. 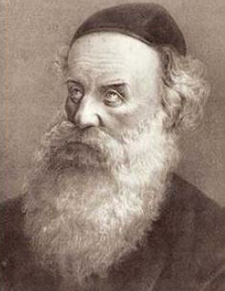 The portrait we are today familiar with of the founder of the Chabad dynasty, R. Shneur Zalman of Liadi, first surfaced in the late 19th century. Within Chabad, there is a tradition that this illustration is authentic and bears a true likeness of the Ba’al HaTanya.

Portraits of R. Akiva Eiger seem to have appeared already during his lifetime. One example, a painting done by Julius Knorr, named Der Marktplaz in Posen (1838), shows a large market scene with three elderly rabbis carrying canes walking together in the lower left-hand corner. The figure in the center is R. Akiva Eiger, who most likely was unaware that an illustration was being made of his likeness.

R. Eiger was 74 years old at the time and is depicted walking with difficulty; he passed away just a few months later. Years later, a publisher enlarged the portion of the painting depicting the three rabbis and produced it as a print titled, “Our Rabbi Ekiva Eger z”l, when he was 74 years of age in a street in the city of Posen, accompanied by two rabbinic judges of the city, R. Jacob Kalvary and R. Moshe Landsberg z”l.”

The portrait of R. Akiva Eiger by himself alone that we are more familiar with today was printed as a lithograph already in his lifetime by Simon Fils in Strasbourg.

Rabbi Yissachar Ber Frank was a close talmid of the Chasam Sofer and a scribe and trustee of the Jewish community of Pressburg. When. R. Yissachar Ber’s daughter reached marriageable age, he was unable to come up with the funds to marry her off. Preferring to avoid charity, he drew a likeness of his rebbe, the Chasam Sofer, and made prints based on his own drawing which he sold to cover the marriage costs.

It is said that when the Chasam Sofer discovered that his portrait was being sold, he summoned R. Ber and rebuked him for painting his likeness and distributing it without his permission, telling him,  “You did not want to show your face so you showed mine instead?” 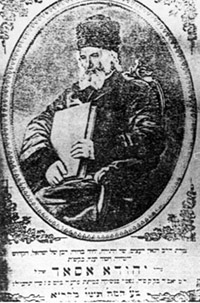 Rabbi Yehuda Aszod was of the most revered rabbis in Hungary, a close friend of the Chasam Sofer and leader of Hungarian Orthodoxy. Despite R. Aszod’s known opposition to his photograph being taken, his students, or perhaps members, of the community were keen on obtaining a photograph of their beloved rabbi after his passing in 1866.

During the funeral, R. Aszod was dressed in his Shabbos clothing and a large sefer was placed in his hands. He was then propped up in his chair and a photograph was taken and quickly reproduced and disseminated. (Post-mortem photography was an accepted practice is general society in the 19th century.) 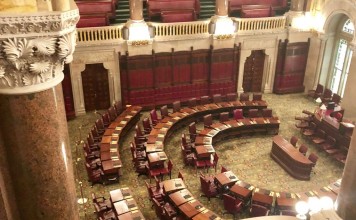 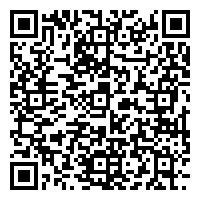