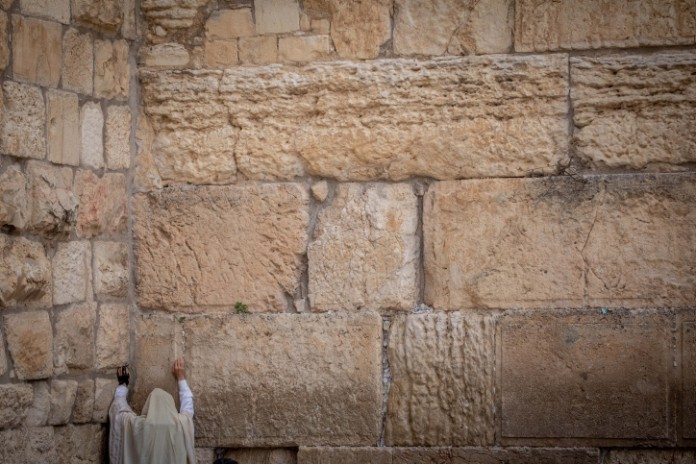 We’ve been taught lots of things before, but the goal of this article is to teach you something you have never learned before; How Jews are supposed to cry. Unfortunately, our history is replete with many tears; “By the rivers of Babylon – there we sat and also cried…” (Tehillim 137:1) “She (Jerusalem) weeps bitterly in the night” (Eichah 1:2). The goal of this article is not to teach you why to cry (thousands of years of history have answered that question), rather I want to discuss the “how” and find out if the Jewish nation has been crying correctly.

The Torah mentions crying/weeping many times. The first time we find this is when Sarah demands that Avraham send away Hagar and her son, Yishmael. Alone in the desert with no water, Hagar said; “Let me not see the boy die.” She then “wept in a loud voice. Hashem heard the boy weeping…” (B’reisheit 21:16). Just 2 chapters later, we see the word again, when Sarah passed away; “Sarah died in Kiryat Arba, also known as Hebron, in the land of Canaan. Avraham came to eulogize Sarah and to weep for her.” (B’reisheit 23:2)

Are these two “cryings” similar? And what about two other cryings which we see later in B’reisheit? When Yoseph is finally revealed to his brothers we read the following; “Yoseph fell on the shoulders of his brother Binyamin, and he wept. Binyamin also wept on (Yoseph’s) shoulders. (Yoseph) then kissed all his brothers and wept…” (B’reisheit 45:14-15). And finally, when Yaakov dies, the Torah states that “Egypt cried for 70 days” (B’reisheit 50:3)

Were they the same?

The answer to this question can be found in the crying of our greatest leader ever; Moshe Rabbeinu. We all know the story. His mother hid him in a basket and placed it in the Nile River. The daughter of Pharaoh found him and immediately knew he was a Jew. Many people explain that she knew this because he was circumcised, but – in my humble opinion – that would not be conclusive since the descendants of Yishmael were circumcised as well.

Let’s read the words of the Torah; “Pharaoh’s daughter went to bathe in the Nile… she saw the box… opened it and saw the boy. The infant began to cry… It is one of the Hebrew boys, she said.” (Sh’mot 2:5-6)

How did she know – for sure – he was a Hebrew/Jew?

The Netivot Shalom – the great Slonimer Rebbe, of blessed memory – solves this riddle with the most unbelievable words you may ever read. He writes that she knew he was a Jew because of the way he cried! These are his words: “His cry was that of a Jew because she saw that it was a cry of hope and not a cry of despair.” He further explains that while the entire world cries, their weeping is one of despair, hopelessness and destruction while a Jewish cry is filled with hope, yearning and passion.

This is how Bitya (or some say Batya) – daughter of Pharaoh – knew that this three month old baby was a Jew… by the way he cried! Incredible! Tears of hope, not despair… weeping of yearning, not hopelessness.

Allow me to take the Rebbe’s holy words and apply them to the previous “cryings” stated above. Yes, Hagar cried over her son Yishmael. This is understandable. She thought her son was dying and had no way of saving him. Her tears were therefore filled with despair. The same was true with Egypt when they cried for Yaakov. They revered him and now he was gone. They thought that nobody would ever take his place… so they cried tears of destruction and tragedy.

Compare that to the tears of Avraham and Yoseph. It is true that Avraham cried when Sarah passed away but they were tears of love and passion for the righteous woman he just lost. This holy man, who passed every test Hashem gave him, didn’t know what despair or depression was! He was all about optimism and unconditional faith in the Almighty. His tears were for the love that was lost and for the flame of passion that was extinguished. The same is true when Yoseph and Binyamin cried after finally meeting each other. They were shedding tears of hope for the Jewish future! They wanted us to use those tears to save the world!

So, what about us? How do we cry? The time has come for our tears to pierce the heavens! The Talmud (Bava Metzia 59a) states the following; “Rabbi Elazar said; From the day the Temple was destroyed, the (heavenly) gates of prayer were locked… but even though the gates of prayer are locked, the (heavenly) gates of tears have not been locked as it is stated; ‘Hear my prayer, O G-d, and listen to my outcry, you will not be deaf to my tears.’(Tehillim 39:13)”

The problem with this is that although we know we need to cry, we were never taught how to do it… until now. Thanks to the Slonimer Rebbe – whose 22nd yahrzeit is on the 7th of Av – you now know how to cry properly.

Tisha B’av will be here in a few days and, unless a miracle occurs (which could happen!), it looks like it will be a Tisha B’av of sadness… not the one we were hoping for. We must, therefore, cry many tears. We need to make sure that those tears are filled with hope that this will be the last time we sit on the floor and mourn. Our weeping must be filled with passion – yes, tears of passion! – that we see the Bet Ha’Mikdash in all its glory, with the Kohen Gadol standing tall and proud! Passionate Jews cannot live without the Bet Ha’Mikdash anymore! And finally – our crying must be out of love for Hashem’s honor and glory. We cry for Hashem… not ourselves.

Tears like that will surely pierce the heavens and change Jewish history forever!

Hearing The Cry Of Another

A Different Way to Cry During the Three Weeks

A Time To Cry