In addition to damaging priceless relics, the perpetrators spray-painted swastikas, Palestinian flags and political slogans, adding insult to injury in their hate-filled assault.


The defilement of the site was discovered by a group of Israeli worshippers who visit it regularly to maintain a Jewish presence in the area.

The synagogue in question was built more than 1,500 years ago, predating the establishment of Islam and serving as tangible proof that the Jewish presence in the Land of Israel preceded that of our foes.

Indeed, perhaps that is one of the reasons why the Palestinians attacked it. After all, the Naaran synagogue gives the lie to their dubious claim to the land.

Needless to say, this latest outrage received virtually no coverage in the mainstream press. Only a handful of Israeli news outlets bothered to mention it, and the international media showed no interest in sharing the story with their audiences.

Contrast this with the whirlwind of reports last October when an Israeli Arab mosque was desecrated and you begin to get a sense of the hypocrisy at work in the media. Indeed, the incident in Naaran is just the latest in a long line of Palestinian acts of sacrilege that have targeted Jewish religious sites.

It was nearly twelve years ago, on October 7, 2000, that the IDF withdrew from the site under cover of darkness after a joint assault launched by Palestinian police and terrorists. The Palestinians, of course, agreed to protect the tomb, but that promise quickly went up in smoke. Several hours later the burial ground of the biblical Joseph had been reduced to debris.

Palestinians armed with pick-axes and hammers attacked the tomb, smashing the stone structure and ripping it apart, brick by brick. They burned Jewish prayer books and other religious articles and subsequently began transforming the site into a mosque. It was then and there, at Joseph’s Tomb, just days after the start of the Second Intifada, that the Palestinians learned two very dangerous lessons – lessons that continue to haunt Israel until today.

First, they saw that violence pays. Israel’s retreat from Joseph’s Tomb was the first time Israel had fled under fire, abandoning territory to Palestinian control under threat of the gun.

Second, the Palestinians learned they could deliberately assault Jewish sites of immense historical, religious or emotional significance without fear of retribution from Israel.

The same holds true of the Temple Mount in Jerusalem, where successive Israeli governments have failed to stand up to wanton Palestinian acts of desecration. And therein lies the “original sin” of various Israeli policymakers, who have consistently capitulated, retreated and withdrawn whenever the Palestinians have trampled on some of our most important national symbols.

Instead of displaying some elementary Jewish pride and confronting the Palestinians to prevent them from assaulting what is holy to us, we prefer to shrug our collective shoulders, look away in shame, and hope for the best.

That may have made sense when the extent of our national power was limited to community councils in the shtetls of Eastern Europe, but surviving in the modern-day Middle East requires an entirely different approach.

For far too long we have inculcated in the Palestinians a sense of impunity when it comes to vandalizing or defiling Jewish holy sites, and it is time for this to change. In light of the Palestinians’ serial abuse of Jewish holy sites, it should be clear to all that they cannot, must not, be entrusted with safeguarding or administering them under any circumstances whatsoever.

The Palestinians have once again failed to demonstrate even the modicum of decency and civility that calls for respecting houses of worship that belong to others.

And so Israel should not hesitate to do what should have been done already: take back Joseph’s Tomb, reassert its sovereignty over the Temple Mount, and eject the PA- controlled Muslim Wakf from the Cave of the Patriarchs in Hebron.

These three sites, more than any others, symbolize our ties to this Land, and the abiding faith upon which they are based. It is time for all of them to return to sole Israeli control, along with all Jewish holy sites in Judea and Samaria. 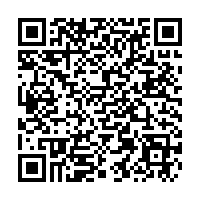