The following article was originally published in The Jewish Press in February 2000. It is being reprinted here now because over the past ten years, nothing has been learned about the central impediment to real peace in the Middle East. The core problem was, and still is, the far-reaching Islamic hatred of Jews. Doctrinally, Israel will never be accepted in the Islamic Middle East because it is a Jewish state. As with the Oslo process discussed in this 2000 article, no “Road Map” or other currently favored form of twisted cartography can hold any plausible promise for Israel. Today, as in the case of Oslo, the Road Map simply requires Israel to exchange land for nothing. President Barack Obama, please take note.

“O our beautiful land imprisoned in a cage and surrounded by wolves, My shaded garden, the tormentors have destroyed you, and the dogs have settled in you, O Jerusalem, O my city, With my notebook and pencil and the fire of my rifle I will shatter the cage, I will kill the wolves and plant the flag. The dogs will not bark in the heroic cities.”

Poem read on the Voice of Palestine, official radio station of the Palestinian Authority (Yasir Arafat), on May 22, 1999.
In the strict Islamic view, Israel is always the individual Jew in macrocosm. The Jewish State must be despised because of this relationship, because of the allegedly “innate evil” of each individual Jew. This is a very far cry from the view (accepted by misguided supporters of the Oslo Process) that Israel is despised only because it is an “occupier.” The Israeli is despised in the Islamic world because he is a Jew. Period.

“The first thing that we have to make clear is that no distinction must be made between the Jew and the Israeli…. The Jew is a Jew, through the millennia…. in spurning all moral values, devouring the living and drinking his blood for the sake of a few coins. The Jew, the Merchant of Venice, does not differ from the killer of Deir Yasin or the killer of the camps. They are equal examples of human degradation. Let us therefore put aside such distinctions and talk about Jews.”

In a current Egyptian textbook of “Arab Islamic History” used widely in teacher training colleges (in a country “at peace” with Israel), similar sentiments are expressed:

“The Jews are always the same, every time and everywhere. They will not live save in darkness. They contrive their evils clandestinely. They fight only when they are hidden, because they are cowards…. The Prophet enlightened us about the right way to treat them, and succeeded finally in crushing the plots that they had planned. We today must follow this way and purify Palestine from their filth.”

Ayatollah Khomeini, in the Foreword to his book on Islamic Government, remarked: “The Islamic Movement was afflicted by the Jews from its very beginnings, when they began their hostile activity by distorting the reputation of Islam, and by defaming and maligning it. This has continued to the present day.”

And again, on the “Zionist Problem” as a mere manifestation of the underlying and all-important “Jewish Problem,” Dr. Yaha al-Rakhawi remarked in AL-AHRAM: “…we are all – once again – face to face with the Jewish Problem, not just the Zionist Problem; and we must reassess all those studies which make a distinction between “The Jew” and “The Israeli”…. and we must redefine the meaning of the word `Jew’ so that we do not imagine that we are speaking of a divinely revealed religion, or a minority persecuted by mankind….we cannot help but see before us the figure of the great man Hitler, may G-d have mercy on him, who was the wisest of those who confronted this problem….and who out of compassion for humanity tried to exterminate every Jew, but despaired of curing this cancerous growth on the body of mankind.”

Jewish supporters of Oslo may even acknowledge this far-reaching Islamic demonization of Israelis as Jews, but – they are apt to argue – Arafat and the PLO are different. They are interested in land. They are pragmatic. Their views are of an entirely different sort. Yet, here is what Arafat said on January 30, 1996, addressing 40 Arab diplomats at the Grand Hotel in Stockholm. Speaking under the title, “The Impending Total Collapse of Israel,” Arafat remarked:

“We Palestinians will take over everything, including all of Jerusalem…. All the rich Jews who will get compensation will travel to America…. We of the PLO will now concentrate all our efforts on splitting Israel psychologically into two camps. Within five years we will have six to seven million Arabs living in the West Bank and in Jerusalem…. You understand that we plan to eliminate the State of Israel and establish a purely Palestinian State…. I have no use for Jews; they are and remain Jews.”

LOUIS RENÉ BERES was educated at Princeton (Ph.D., 1971). Strategic and Military Affairs columnist for The Jewish Press, he lectures and publishes widely on Israeli security matters. 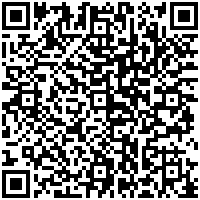