Virtually every conservative in America knows the title of this column is true. Virtually every leftist knows it, too, but lying for the cause is what the left does (think “Russian collusion”).

And those liberals who have become increasingly indistinguishable from leftists know it’s probably true but won’t say so – lest they side with conservatives and, more importantly, be branded “racist” by the left. How the left brands a person now determines many people’s moral and political positions.


If the left cared about blacks, leftists would work to raise blacks to universal academic standards, not lower and abolish standards as they have done for decades, most recently in abolishing the SAT exam at the University of California.

If the left cared about blacks, leftists would work to elevate all people, including blacks, not only to universal academic standards but also to universal personal/moral standards. Perhaps the most obvious of these is that women should marry before having children, and men should stay in the lives of children they conceived – ideally as the husband of their mothers, but at least as a father, mentor and breadwinner.

But when University of Pennsylvania Law School professor Amy Wax wrote a column advocating such “middle-class, bourgeois” standards, leftists denounced her as a “white supremacist” (as if those are “white” values – a racist view if there ever was one) and “racist.” Nearly half her Penn Law colleagues denounced her.

If the left cared about blacks, they would encourage a vibrant religious life in the inner city (and everywhere else, for that matter). What proportion of black (or non-black) murderers had attended church the Sunday before they committed murder? But the left despises traditional Judeo-Christian religions as much as it despises America.

If the left cared about blacks, leftists would increase – not lobby and demonstrate to decrease – police presence in black neighborhoods, where blacks are murdered, raped, and beaten in the thousands each year by other blacks – almost never by whites, whether policemen or anyone else. In 2016, the last year for which I could find FBI data, 2,870 blacks were murdered. Of those, 2,570 of their murderers were black; 243 were white.

A typical left-wing reaction to all this was written in June 2019 by journalist Michael Coard in the Philadelphia Tribune: “Today’s black so-called thugs/monsters are created by the evil American system that miseducates them, unemploys them, underemploys them, over-polices them, and over-incarcerates them. America is Dr. Victor Frankenstein.” Note “over-polices.”

Coard is correct about one thing: Today’s blacks are often miseducated, which leads to their unemployment, underemployment, and other terrible consequences. Who has been running America’s schools for decades now? (Hint: Not the right.)

But that doesn’t cause violence. Black murderers and rapists are the only people in America told that no matter what they did, they are not responsible for it. America is. And the people telling them that are all on the left.

Why does the left do this?

First, because, as opposed to liberals, the left – everywhere in the world – hates America. And why does the left hate America? Because it is a living refutation of left-wing ideology. America is the most successful country while also being the most capitalist, most religious, and most nationality-affirming of all the industrialized democracies.

The left-wing mantra of “America is racist” has little to do with caring for blacks; rather, it is indispensable to bringing America down.

Second, without a lopsided black vote for the left-wing party, no Democrat could get elected to national office. It is therefore imperative to repeat as often and as vociferously as possible how anti-black America is. The angrier a black person is at America, the more likely he or she is to vote Democrat. Some years ago, after talking to listeners of every race on my radio show for decades, I came up with this riddle:

“What do you call a happy black person?”

To the left, blacks are not real people as much as they are an electoral bloc. How else to explain Joe Biden’s recent comment, “If you have a problem figuring out whether you’re for me or Trump, then you ain’t black.” The contempt for blacks – from the sentiment that one is “not black” unless one is a Democrat to his use of the word “ain’t” – is obvious to any non-leftist.

The communists never cared one whit about workers, but they preached incessantly on workers’ behalf.

And whereas liberal Jews constituted a bedrock of support for Jews and the Jewish state, left-wing Jews, like George Soros, don’t care one whit about Jews or Israel. Likewise, their support for Palestinians has nothing to do with care for Palestinians; it is all about hatred for Israel and America. 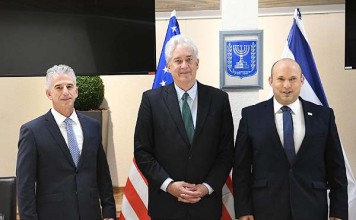