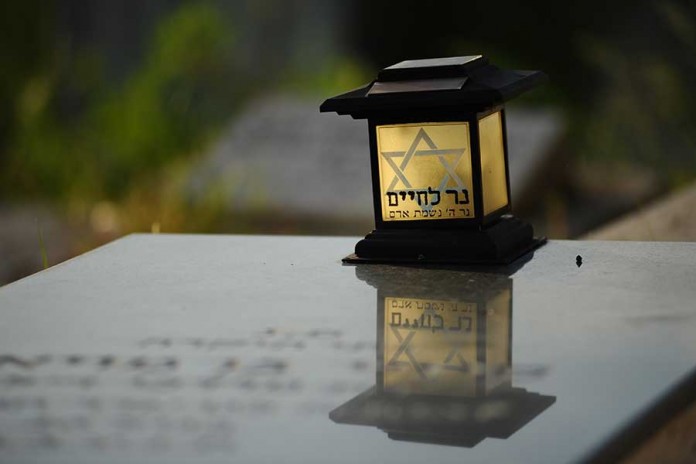 We are taught that a person’s soul ascends to a higher place in Heaven every year on the day of the yahrzeit, the anniversary of the day of death. As part of this annual elevation, the soul undergoes a review and judgment of its deeds in this world. This is because transgressions committed during one’s lifetime, which may have been forgiven upon death, may not necessarily be as easily forgiven in order to merit a higher level in Heaven. Every year one’s slate is reviewed anew to ensure that one is indeed worthy of ascending to a higher level. As a result, a number of yahrzeit customs have evolved over the centuries to help earn the deceased additional merits when the soul is judged.1

Among the most well-known and widely observed of all yahrzeit customs is the recitation of Kaddish in memory of the deceased.2 According to some accounts, it wasn’t until the 13th century that the Kaddish became a prayer distinctly associated with mourners and those observing a yahrzeit.3 Sefardic communities have different customs for when the Kaddish is to be recited. In addition to the day of the yahrzeit, many Sefardi Jews recite Kaddish from the Shabbat or Motza’ei Shabbat preceding the yahrzeit, and continue daily until and including the day of the yahrzeit itself.4 Even more meritorious for the deceased than the recitation of Kaddish is for one to lead all the services in the synagogue on the day of the yahrzeit.5

There is a mistaken belief that one should cease reciting Kaddish on the yahrzeit of a parent once fifty years have passed since their death. There is no authentic source for this custom, and one should continue reciting Kaddish for one’s parents on their yahrzeit throughout one’s life no matter how much time has passed.6 It is also customary for one to receive an aliya, preferably the maftir aliya,7 and to lead the Mussaf service on the Shabbat before the yahrzeit.8 One should also arrange to receive an aliya on the day of a yahrzeit itself if it is a day on which the Torah is read.9

The purpose and benefit of reciting Kaddish, receiving an aliya, and leading the services on a yahrzeit is based on the principle that performing mitzvot, especially those that allow others to participate in the mitzvah, generates merits for the deceased.10 In this context, offering the congregation the opportunity to praise G-d (through their responses to these prayers), provides three opportunities. One who does not at least recite Kaddish for one’s parents on their yahrzeit transgresses the mitzvah of kibbud av va’em.11 One should not embark on a trip on or around the date of the yahrzeit if there is a chance that there will not be a minyan at one’s destination to enable him to recite the Kaddish.12

The kel malei rachamim prayer is recited for the deceased on the day of the yahrzeit during the Torah reading service. Others recite it (or have it recited by the rabbi, gabbai, or chazzan on one’s behalf)13 on the Shabbat before the yahrzeit.14 Reciting the kel malei rachamim on the Shabbat before the yahrzeit has become widespread, as the Torah is not read on most days of the week and it is preferable for kel malei rachamim to be recited during a Torah reading service. It is also explained that praying for the souls of the deceased on Shabbat is especially appropriate as Shabbat is “a taste of the World to Come.” So too, since even the dead rest on Shabbat, as they are not subject to any punishment, it is a favorable time to invoke their souls and pray on their behalf.15 Reciting kel malei rachamim, especially when accompanied by a pledge to charity in memory of the deceased, is said to be beneficial for their soul.16 On Yom Kippur, one should be especially mindful to make pledges to charity in honor of the departed when praying for them. This is because even the dead receive atonement on Yom Kippur, and donating to charity on their behalf is beneficial for this purpose.17 There is a custom to recite kel malei rachamim for the deceased parent of a bride or groom under the chuppa. This is based on the teaching that deceased parents (and some sources indicate that this extends three generations back) are given permission to attend the chuppa of their children.18

It is also customary to visit the grave of the deceased on their yahrzeit.22 This is especially true for the yahrzeit of a parent. In fact, one should make an effort to visit a parent’s grave at least once a year even if one is unable to do so on the day of their yahrzeit. While the origin of this annual pilgrimage is not completely clear, it is the prevalent custom today and one should make an effort to observe it. According to the Arizal, the soul of the deceased is especially dominant at its grave on three occasions: on the yahrzeit, on the 15th of every Jewish month, and on erev Rosh Chodesh. Rav Chaim Vital, however, writes that there are really only two such times: on the 15th of a month and on erev Rosh Chodesh. The 18th century kabbalist, Rav Binyamin HaLevi, wrote that this was a tradition that he had from the Rishonim as well as the Arizal.