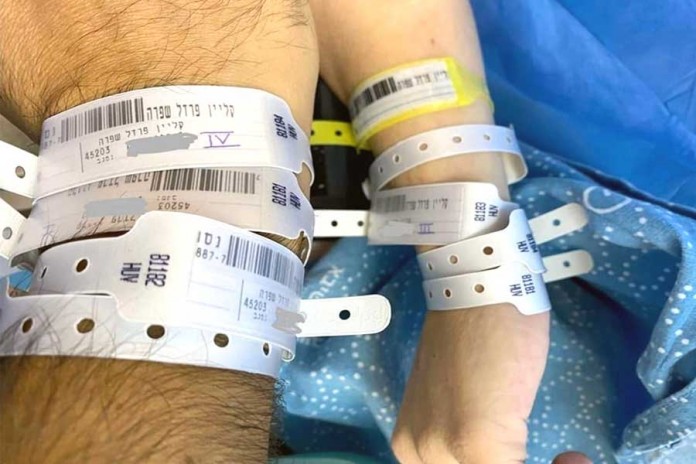 The above photo of two arms, each with four hospital wristbands, was sent to me by Rabbi Boaz Klein and it took me a few moments to understand. Yes, quadruplets were born to Boaz and Frady, Chabad emissaries in Barlioche, Argentina, “the most southern Jewish point on the map.” Here’s what Rabbi Boaz wishes to share about his experience:

“In this week’s Torah portion Yaakov Avinu says, ‘I am unworthy of all your kindnesses.’ That is our feeling. Yaakov Avinu felt that he received so much light from above, so many gifts and kindnesses, that he had only this to say in response to such abundance: ‘I am unworthy.’

“We have been emissaries for 14 years. We have met thousands of hikers and tourists, and we never hid our difficulty in having children. But then three of the four mothers of the nation of Israel were childless – Sarah, Rivkah, and Rachel. This challenging predicament accompanies us in the book of Genesis that we are presently reading. It’s not easy to be open about our story, but we want to give strength to other couples who find themselves in such a situation, and also to publicize our personal miracle.

“We felt that the blessing of the Lubavitcher Rebbe accompanied us throughout this journey. The Rebbe said that we should always speak positively. And so, when Frady was hospitalized with a pregnancy that was “highly chancy” we called it a pregnancy that had a “highly good chance.” My amazing wife continues on her mission even while in the Sheba Medical Center. It’s as if she brought the spirit of Chabad of Barlioche to the hospital’s maternity ward. Here she continually encourages and strengthens everyone. Her faith is infectious where a lot of it is needed.

“The four babies were born one right after the next by Caesarean section. I felt that I was a partner to the Holy One blessed be He four consecutive times. The two girls are called Hannah-Liba and Rivkah-Malkah. The boy who just received his brit is called Yosef-Yitzchak. The other boy needs to grow a little more before he enters into the covenant of Avraham with his brit, at which time he will receive his name.

I am humbled from all the kindness.”

I am accustomed to meeting tourists at the Kotel (Western Wall) for Kabbalat Shabbat, but the tourists I met at the Kotel in the women’s section this past Shabbat were a surprise. Suddenly behind me I heard several women speaking fluent Russian. I turned around and saw more women like them filling the plaza in a large circle. They were holding prayer books and began to sing Kabbalat Shabbat songs slowly together. 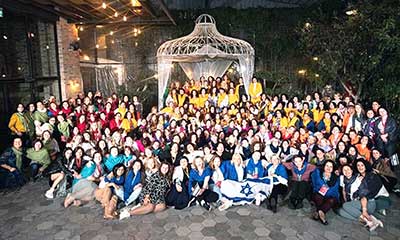 And then one of the group’s guides explained to me that this was even more amazing than I might think, as she pointed to two parts of the circle “In this part of the circle, there are around a hundred women who have come from Russia. In that part of the circle over there, there are sixty women from Ukraine. They came to Israel under the auspices of Momentum, an organization that brings Jewish mothers to Israel from around the world. We worked very hard to bring these women straight from war-torn areas. Right here is a woman who arrived from Dnipro, Ukraine,” she said while pointing to one of them who stood with eyes closed while locked in an embrace with her companions in the circle.

This special group is handled with much sensitivity. The women from Russia and from Ukraine do not ride in the same bus and flags of the two countries are not displayed. Their guides were women who had made aliyah themselves from Russia and Ukraine, who spoke the languages and understood the mentality of the visitors. During their eight days in Israel, they would tour the desert and the Hermon, Tel Aviv and Tzfat, and many other places in between. The highlight of their trip would be Shabbat in Jerusalem. “Before we came down to the Kotel, they became acquainted with the prayer book for the first time,” the guide explained, “and it was evident that each one of them had much for which to pray . . .”

I looked at them as they sang “Lecha Dodi” and the words fit the moment perfectly: “Arise, go forth from the ruins, too long have you dwelt in the valley of tears; He will show you abounding mercy. . . Shake the dust off yourself, arise, put on your glorious garments, my people.”

I do not know where they will be next Shabbat, in Moscow or in Kiev, but for a few moments they were not women from Russia or from Ukraine, but simply Jewish women who welcomed in Shabbat at the Kotel.