At a press conference outside Machpelah House which had been evacuated Wednesday in Hebron, Shlomo Levinger and attorney Doron Nir-Tzvi told reporters that the purchase of Machpelah House had been in the making for some three years. The tenants had planned to patiently await government approval for their purchase of the house from a local Arab.

But the arrest of several Arabs by the Palestinian Authority on suspicion of selling real estate to the Jewish group – a crime which could be punished with death – changed the plan, and the group decided to move in despite the murky prospects of staying.


Knowing full well how hard it would be to establish residency in a newly purchased house—facing a hostile Israeli civil authority whose directive is to strictly limit the growth of the city’s Jewish community, the group of buyers was moving slowly and quietly, through intermediaries and straw men, forever remaining below the radar for three years.

At the press conference, Levinger said they paid four times the value of the house, which has been estimated at around $250 thousand. Earlier in the day, when the Jewish Press asked Levinger to confirm a rumor that they paid half a million dollars for the house, he said, “I wish it would have been that amount.”

The money for the purchase came from donations of Jews from Israel and abroad. “Every week we would travel to meetings in private homes, collecting one shekel after another,” Levinger said. “There were times when we came back with only a few single shekels, other times we’d pick up thousands. We spent days and nights collecting this money, faithfully and lovingly.

“Once the money had been collected, we embarked on the purchase deal. It was a Sysiphian labor. We knew that the Attorney General’s office would be looking everywhere for possible holes in the deal.”

According to Doron Nir-Tzvi, in Judea and Samaria, real estate deals are conducted in an anachronistic fashion, whereby a deal must first be completed before the buyers are permitted to apply for government approval (Heter Iskah). Therefore, once every last T was crossed and I dotted, the buyers planned to wait patiently for their deal to go through.

Sources in the Civil Administration were telling them they couldn’t find faults with the deal, that despite themselves they would end up having to approve it.

But then the PA arrested both straw men who had been carrying out different part of the bargain, followed by the jailing of their family members as well.

At this point, Levinger et al felt that their only recourse was to take possession of the property, or risk losing the deal altogether.

Both Levinger and Nir-Tzvi expressed concern for the jailed Palestinians. Levinger told the Jewish Press earlier that he was urging the Israeli government to demand their release of the Palestinian Authority.

If Defense Minister Barak refuses to sign off on the deal, the buyers are planning to appeal to other government authorities. But Attorney Nir-Tzvi said he would not recommend that his clients approach Israel’s Supreme Court with their plight, as it would likely be an imprudent use of their financial resources, considering the probable response of the court.

I reminded Shlomo Levinger that the cause cited by Defense Minister Ehud barak for the evacuation Jewish tenants from Machpelah House was not any fault he cited in the deal itself, but the fact that as things stand in Judea and Samaria, the Defense Minister is permitted to use his power arbitrarily to maintain public order. In other words, even if the real estate deal is, indeed, pure as the driven snow, and all the sides, buyers and sellers alike, have been willing participants with not a hint of coercion – Barak would still be within his rights to evict them.

“You must have heard the saying, “Pornography, a matter of Geography,” Shlomo Levinger cited Sakini from “The Tea House of the August Moon” in the middle of hot and dusty Hebron.

“Danger to the public order is in the eye of the beholder,” he continued. “The chiefs of police here have told me, Shlomo, we passed the request along to the higher echelons, everything in our opinion has been quiet after you moved in; the Arabs were cognizant of the deal, they expected it to take effect, they took no issue with it.”

The group of evacuated tenants is determined to stay in their protest tent (“protest parasol” is how our man on the scene Stephen Leavitt called it) until Ehud Barak is ready to sign off on their right to the house – as had been originally promised by Netanyahu’s cabinet. For now, they will be celebrating the seder under that scant tent, and Levinger is asking folks not to come in droves before the Sunday of Chol HaMoed. “We don’t have enough room for everybody at the seder table,” he apologized. 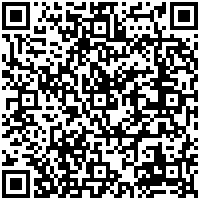